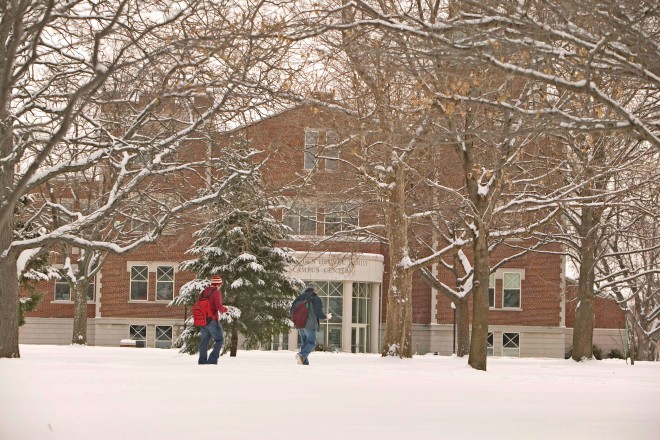 Each January, Door County experiences a mass exodus as the snowbirds fly away to warmer climes. The hearty souls who remain hunker down for the winter to enjoy the pastimes of snowshoeing, cross-country skiing, and indoor activities, many of which include sitting by a roaring fire…and that includes the fire burning in the Door Community Auditorium’s fireplace.

For the past four years, the Door Community Auditorium (DCA) has hosted the St. Norbert Distinguished Lecture Series and it has proved a most rewarding experience for the peninsula’s winter warriors. A series of Saturday morning lectures featuring some of St. Norbert College’s most “distinguished” professors, the topics discussed have ranged from the war in Iraq to the disaster wrought by Hurricane Katrina.

Over the years the collaboration between these two noteworthy entities has proved a success. And as so often happens, it all began with a simple idea, a leap of faith, and the meeting of two like minds. But it took a particularly dedicated “mind” to get the proverbial ball rolling and so Anne Haberland Emerson stepped up to bat.

The idea of hosting a speaker addressing a topic of international relevance originated at the Edgewood Orchard Galleries in Fish Creek, where owner Anne encountered William Hynes, President of St. Norbert College. Within the conversation they shared, a seed was sown and an idea began to germinate. Why not host guest speakers at the Door Community Auditorium?

“When we [DCA] first opened the doors, the vision included presenting music, film, theater, lecture and dance in this wonderful new facility,” explained Anne. As one of the founding mothers of the DCA, Anne emphasized “the educational component of the auditorium’s mission.”

Returning to his office, President Hynes pursued the logistics of collaborating with the DCA and slowly the idea of featuring guest lecturers took solid shape and form. Anne made a contribution by suggesting Dr. Shelley Hearne, the Director of Trust for America’s Health, as a potential first guest speaker.

“She is my niece,” related Anne, “and I thought she might be able to come to Door County to do a presentation. Unfortunately, she was very busy and wasn’t able to commit. But we had connected the dots, and the idea was passed to the DCA staff who were very interested in hosting a lecture. And so the collaboration expanded and grew.”

“Originally, we were thinking in terms of an international theme focusing on current events, playing off St. Norbert’s ‘Great Discussions’ lecture series,” recalled Dr. Joseph Tullbane, Associate Dean of International Studies. “We have an amazing group of professors, many of whom are experts in international studies and are excited to share their knowledge. Bringing the lecture series to Door County has been a very rewarding experience for all of us.

Within months of the decision to collaborate on a lecture series, St. Norbert College’s professors had suggested topics for the first season, with subjects ranging from a discussion of the roots of the Middle East conflict to United States relations with Korea. In the middle of winter, guests donned their coats and trekked to the auditorium to be enlightened on Russia’s fight for democracy and the Muslim presence in the Philippines.

In 2005, the lineup for the second season proved no less stimulating, featuring a discussion of the Big Bang and related theories, travel to “Ultimate Peru,” an examination of proverbs and narratives from ancient culture, an exploration of free trade, and a walk through the Electoral College.

The 2006 St. Norbert Distinguished Lecture Series kicked off with “Anatomy of the Earth’s Past:  Reconstructing Ancient Landscapes,” continued with a discussion of “The Economics of Pro-Sports,” visited Tolkien’s Lord of the Rings, compared poets Walt Whitman and T.S. Eliot, and investigated the disaster left behind in New Orleans following Katrina.

Last winter, “The Power and Myth of Harry Potter” swept overhead, as the ice thawed for “Ice Age Puzzle,” and the well being of theater was discussed. “Delighting in the Experience” related contemporary art and the five senses and “The Clash of Civilizations” explored peace in the Middle East.

“The lecture series is representative of what is happening at the auditorium, and it’s all exciting,” Anne smiled. Added Dr. Tullbane, “St. Norbert College is very pleased to be collaborating with the auditorium; we have opened the door on new ideas and an exchange of information with Door County. The idea of a lecture series has grown into something really special and valuable.”

“The Risks and Promises of Forgiveness”
Dr. Paul Wadell, Saturday, March 15, 9:00 am