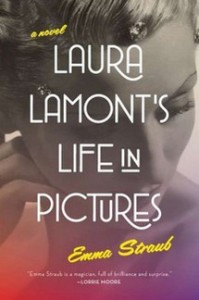 Door County readers will enjoy Emma Straub’s first novel Laura Lamont’s Life in Pictures, recently released by Riverhead Books, in part because of the setting. The central character Laura begins life in Northern Door as Elsa Emerson, the daughter of parents who own a summer theater, the Cherry County Playhouse. Straub writes of the Door Peninsula with first-hand knowledge, as she and her parents have been long-time friends with gallery owners Minnow and Anne Emerson.

After her taste of local theater during the summer of 1937, fictional seventeen-year-old Elsa marries fellow trooper Gordon Pitts and travels by bus with her new husband to Hollywood in search of cinematic fame, which as Laura Lamont, she finds. The archetypal trajectory of her career and the recognizable types of actors she encounters creates a fictionalized history of the Los Angeles film industry from her from the late 1930s to the early 1980s.

Laura Lamont’s journey is filled with the drama that flickers across the silver screen, a tale of heady triumphs and grim failures, a classic story of loss and redemption. Although only the early years of Elsa’s life occur in Door County, the interplay of her past and the present creates tension in the story.

While Laura Lamont’s Life is Emma Straub’s debut novel, she has been connected with the writing of fiction her entire life. Her father Peter Straub (originally from Milwaukee) rose to fame with the publication of his best-selling horror novel Ghost Story in 1979, the story later made into a popular movie. He has written 17 novels (two in collaboration with his friend Stephen King) and earned several Bram Stoker Awards.

Emma Straub earned her MFA under novelist Lorrie Moore at the University of Wisconsin – Madison. Her short fiction has appeared in several magazines and she received the Wisconsin Library Association Outstanding Achievement Award for her collection of short stories Other People We Married. 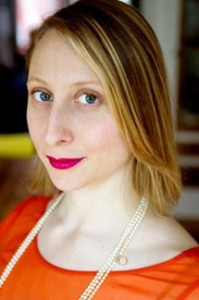 As a part of her national book tour Straub will be speaking to selected English classes at Gibraltar High School on Sept. 17. A public wine and cheese reception in her honor will be held at Edgewood Orchard Galleries at 4 pm, followed by a 5:30 pm reading and book signing at Peninsula Players Theater. Joining Straub for short readings will be Gibraltar students Evan Board, Anja Kopischke, and Lena MacDonald, sharing their work produced in the workshop.

Emma Straub’s second novel The Good Face is scheduled for publication in 2014, also by Riverhead Books.

Anne Emerson, founder of the Friends of Gibraltar, and Vinni Chomeau, Special Projects Coordinator of that organization, are spearheading a yearlong writing program for Gibraltar Schools, Write On, Gibraltar! The organization sponsored past U.S. Poet Laureate Billy Collins as a speaker in August, as well as Emma Straub’s appearance this month. Other guest artists will be involved in writing projects throughout the year.

On Oct. 9 Jerod Santek, who is Programming Director of the Loft Literary Center in Minneapolis, will facilitate a public meeting at the Door Community Auditorium to discuss expanding the concept into a Write On, Door County! Program.

Elsa was the youngest Emerson by ten years: the blondest, happiest accident. It was John, Elsa’s father, who was the most pleased by her company. His older daughters already wanted less to do with the Cherry County Playhouse, and it was nice to have Elsa skulking around backstage, her white-blond hair and tiny pink face always peeking out from behind the curtain. Elsa was a fixture, the theater’s mascot, and the summer crowds loved her.

The Cherry County Playhouse, so named because of the cherries Door County produced, was housed in a converted barn on the Emerson property in Door County, Wisconsin’s thumb. The barn was two hundred feet off the road, which had been renamed Cherry County Playhouse Road in honor of Elsa’s parents’ efforts and because there was no real reason not to. From May until September, tourists from Chicago and Milwaukee and sometimes even farther afield drove up and stayed in the small wooden rental cabins for the entire summer. After days spent on Lake Michigan or Green Bay, they would pile into the old barn and sit on wooden pews cushioned with calico pillows sewn by Mary, Elsa’s mother. John directed and often starred, his booming baritone carrying into the surrounding trees, all the way to the road. The older girls, Hildy and Josephine, who had been such promising Ophelias and Juliets in their early teens, had instead taken jobs at the Tastee Custard Shack down the road and could most often be found handing over cones of frozen custard. Elsa was nine years old and happy to participate. She tore tickets, swept the stage of errant leaves and clods of dirt, and doted on the barn cat, who hated everyone, especially children.