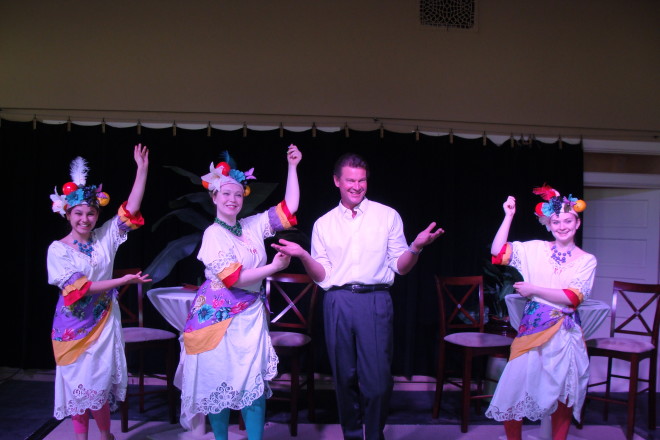 If the saying “what doesn’t kill you makes you stronger” is true, then Rogue Theater finished the year much stronger.

Last winter, we toured with our yearly murder-mystery dinner theater, Trouble at The Tropicabana. It was tremendously successful, selling out every dinner venue. Much of the show’s accomplishments can be attributed to the theme: Ricky, Lucy, Fred and Ethel; a high energetic supporting cast, along with singing, dancing, and audience participation – a true formula for success.

Our improv troupe played for the Door County Board of Realtors Christmas party and through their recommendation, we were honored to bring our improv show to Madison for the Door/Kewanee County Legislative Days in April.

Getting back to “what doesn’t kill you,” on April 1 Rogue Theater learned that Bay Shipbuilding was to purchase The Depot Performing Arts Center building, our home base for a year and a half. Though we requested to lease the building to finish our summer season or until the fate of the building had been determined, Bay Shipbuilding was not interested and Rogue would be on the road once again. We had less than 30 days to vacate the building. With shows already in production for the spring and summer season, this was quite a blow. Our entire 2015 summer season had to be put on hold, while we packed, stored and looked for a new home.

Now here’s the part where “we get stronger.” After our last show at The Depot PAC on April 26, we had so much to do in very little time. We seemed to be losing so much with the need to move props, costumes, curtains, chairs, the stage, all the stuff needed to make theater possible, with one exception – the people. People make theater possible. Our troupe, friends and theater patrons poured out support for us, bringing trailers, offering storage areas, tools and moving everything out on time.

The only thing we didn’t have yet was a new theater home. Then out of the blue, we received an email from a friend and patron saying the Sturgeon Bay Jaycees might be interested in sharing the Jaycee Hall with us. Their membership was declining and they were looking for support with their building expenses. We met with the Jaycees and indeed came up with an arrangement and moved in, setting up our stage once again.

We did not do any shows in May and June, but in July we came back strong with local playwrights Carol Lyons’ hit show Ma’s Case. Our Children’s Theater Camp also began in July and summer productions went on from there. Now we are back on track in our new facility, while adding a few shows on the road. Since we are a year-round theater, we are now working on new shows for the winter: our Christmas show with area children and, of course, a murder-mystery dinner theater production.

Rogue Theater is truly blessed being part of this community and community theater, Rogue truly is.