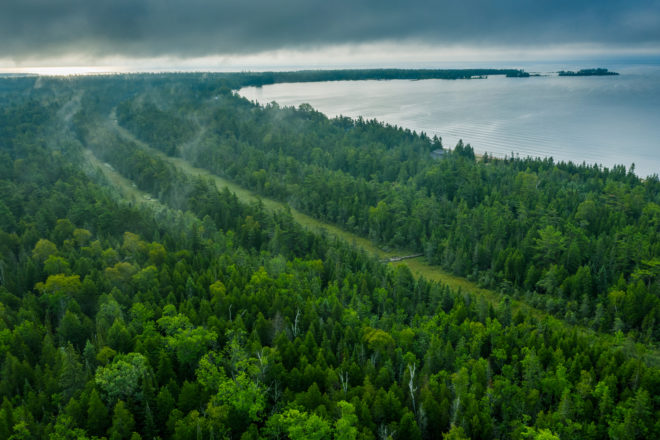 “Door County is famous throughout the Midwest for its matchless scenery and climate, and for the kindly folk that inhabit this peninsula county. Surely Door County will not allow any of its natural shrines to be desecrated.”

It began about 1,400 years ago, after receding glaciers had already scraped bare the shore of Lake Michigan along Door County’s eastern edge.

Storm-whipped waves and longshore currents battered the shore and churned up sand. In the wake of this violent tossing, the shoreline formed into a crescent-shaped ridge. The waters receded, but then it happened again, and again, and again, this collision of wind, water and sand.

Thirty ridges eventually formed, each varying in height, width, drainage and access to sunlight, each now farther inland than the one that followed. Between these ridges of extinct shoreline ran parallel swales of wetlands.

These curving, old beaches of Lake Michigan took an average of 30 to 50 years to form. The youngest, closest to the shore today, began forming in the 1800s. By then, the brave new world had already emerged — one meant for fairytale settings and hobbit habitats.

This is The Ridges Sanctuary in Baileys Harbor.

This special place was designated a Wisconsin State Natural Area in 1953 because of its diversity of unusual habitats, resulting in what the Department of Natural Resources called “one of the greatest concentrations of rare plants in the Midwest”: some 475 plant species in one of the most biologically diverse landscapes in Wisconsin.

It was named a National Natural Landmark in 1967 courtesy of its outstanding biological and geological resources, a National Audubon Society Important Bird Area in 2007 and a Wisconsin Wetland Gem in 2009. All of these designations herald The Ridges’ extensive areas of unbroken forest, coastal wetlands and bays, old-growth remnants and unique dune-swale topography. The National Audubon Society says it’s one of the most significant natural areas in the Midwest, if not the entire eastern part of the nation.

And achieving these recognitions as a place of importance to the nation’s and state’s natural heritage all began with the vision and passion of local people.

In 1935, the federal government deeded 40 acres and the Baileys Harbor range lights to Door County. The county decided to turn the land into a campground.

“Some trees were felled and bucked in preparation for campers,” wrote Roy Lukes — manager and chief naturalist of The Ridges Sanctuary from 1964 until 1990 — in his book, The Ridges Sanctuary. “Clearing was begun for proposed roadways on ridge tops, and swales were being filled. Olivia Traven and Mrs. James McArdle investigated the noise of the work and discovered the project underway. They raised a protest that reached from the county to the state and brought about quick events.”

Albert Fuller, curator of botany at the Milwaukee Public Museum, launched the successful campaign to stop the campground. He argued that the site was a “veritable outdoor museum” that was “rich in orchids and rare plants.”

“The orchids alone should be a strong enough reason for preserving this area,” Fuller wrote in Lukes’ book. “A year ago, an amateur botanist from Berlin, Germany, made a trip to Door County just to see some of the native orchids at home.”

Their purposes were to acquire and protect all the land in the area and to carry on educational and scientific activities that promoted conservation and preservation of wild plant and animal life.

The Ridges’ purchase of the range light parcel became Wisconsin’s first land trust. Today the nonprofit organization protects 1,600 acres and inspires stewardship of natural areas through programs of education, outreach and research. It welcomes thousands of visitors to experience the nature preserve along winding wooden boardwalks and trails, while preserving it as a refuge for nature, where the impacts of human activity don’t interfere with the survival of native plants and animals.