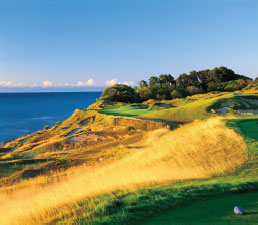 For anyone who loves golfing in Wisconsin, this is going to be a special year. As host of the 2004 PGA Championship, Whistling Straits in Kohler is close enough to the Door Peninsula to be considered “just down the shore.” The event will bring with it the finest tour players, roughly 300,000 spectators, an estimated $70 million in tourism revenue for the state of Wisconsin, and the full attention of the golfing world.

Many will find the proximity of the championship too enticing to resist. Maxwelton Braes’ Director of Golf, Jason Daubner is one, admitting, “What golfer could pass up the opportunity to see the best players in the world compete for one of the PGA’s four major tournaments?”

Tim Bauman, PGA Head Professional at Horseshoe Bay Golf Club, will also be attending the event. He commented, “The state of Wisconsin asked all the PGA Members if they would like to volunteer for the event. I said yes and got assigned range attendant, which includes putting up the nameplates and restocking the range balls. I feel this will be a once in a lifetime opportunity to be up close and personal with the best players in the world.”

Perhaps more than ever before, the 2004 PGA Championship’s venue will feature many of the characteristics to which Door County visitors have grown accustomed. Features of the escarpment and rolling lakeshore terrain, and topography found along the Door Peninsula will be unmistakable at the Straits.

Whistling Straits, a beautiful and intimidating course, reminiscent of Irish seaside links courses, possesses more than its rightful share of challenges for the professionals who will compete for the Rodman Wanamaker Trophy. Having worked for the Kohler Company at Blackwolf Run as an Assistant Golf Pro, Daubner can attest that “the challenges that the players will face include, for starters, the length of the golf course. The course can be played over 7,400 yards. Secondly, the weather will play a big part in how well the players score. The winds that come off of Lake Michigan can be fierce and make the best players in the world look like amateurs. The rough will be thicker than it has ever been, forcing golfers to try to keep the ball in the fairways. The greens will roll faster than usual and will test the touch of players. The greens are not flat like typical greens, but have a lot of undulation. It is not uncommon for a player who has a putt over 40 to 50 feet to watch his ball break two or three different ways before getting to the hole.”

“Look for the 17th and 18th holes to play a big part in the finish of the championship,” said Tim Blackford, General Manager of Horseshoe Bay Golf Club. “The par 317th requires an exact shot to save the pros from a long, steep walk down to the beach, where scores of 5 and higher will be commonplace. The unique par 4 18th hole, with the long carry on the second shot, will bring an interesting finish to everyone’s day.”

The PGA Championship, one of only four major professional golf championships, is the final major of the calendar year and will be played for the 86th time from August 9th to the 15th. Golf savants consider the event one of the toughest in all of golf to win as it features the strongest players in major championship golf.

Wisconsin was recently ranked the state with the most avid golfers (per capita). With this many regional golf aficionados, the 2004 golfing season should prove a very enthusiastic one. “People from Door County should take advantage of being so close to such a venue,” Daubner said. “The PGA of America is telling our section that this year’s tournament is expected to break all-time attendance records.”

“When it is all over, the PGA Professionals and the world will have a different view of golf in Wisconsin,” said Blackford. “Once they discover the variety and breadth of golf in this state, expect our reputation for golf to be, if not born, at least matured into the rightful standing that we deserve. August will be a big month, and may just forever change golf in Wisconsin as we know it!”