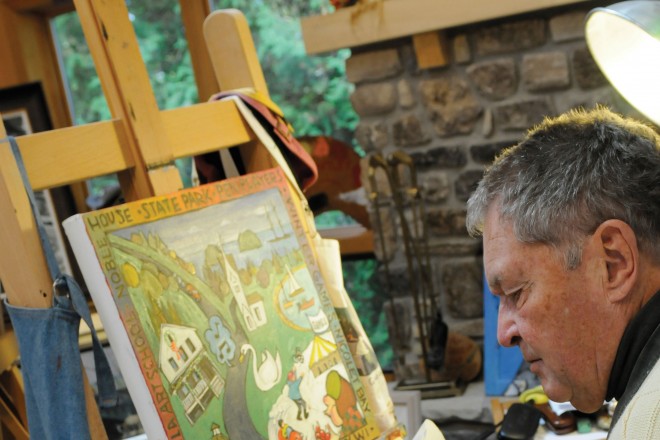 The work of R.D. Bentley hangs in the White House and in some of the best boardrooms in the nation. His portraits include Sir George Solti, esteemed maestro of the Chicago Symphony Orchestra; Dan Rostenkowski, Chicago Congressman; President George W. and Laura Bush; and countless government, corporate and academic VIPs across the country. A visit to Bob’s studio/gallery, a recent addition to his home in Ellison Bay, reveals that his portraits are only the proverbial “tip of the iceberg.” You enter the light-filled room overlooking the bay and are surrounded by the enormously varied “looks” of R.D. (Bob) Bentley.

A portrait of a distinguished gentleman is propped on one easel showing in-progress work and on another easel is a pair of new creations he’s including in “The Villages of Door County” collection. Side by side are two completely different styles, one a true representation of a person, the other a whimsical, symbolic and humorous interpretation of a Door County Village:  two of the many artistic signatures of Bob Bentley.

Bob’s love and appreciation of Door County, which he calls “a precious place,” are revealed in his poignant landscapes, and his charm as an artist can be seen in his invention called “Portscapes.” In this combination of portrait and landscape, he paints a subject or subjects within a scene familiar to them:  a board chairman dressed in waders and fishing vest casting in a trout stream, for instance, or Bob’s wife Barbara, playing with their Labrador retriever in the woods near their home.

Bentley’s portraits and Portscapes have brought him fame, success and kept the commissions coming, but if you ask the artist what gives him the most pleasure, he’ll confess it’s his “Whimsies” or comic satirical pieces. “‘Whimsies’ come right out of my head and I can bypass the discipline necessary in my portrait work. I can break the rules and be totally, wildly creative,” says Bob. This ability to break free speaks to Bob’s struggle in his art with perfectionism. He recalls an early art mentor who pointed out that “nothing is perfect in nature. If you try to perfect it, you’re going against God.” When Bob heard that, it resonated and freed him to paint from the inside rather than slavishly copying his subject. “I try to get a little humor into everything; even my portraits are very loose and show some humor, but you’ve got to make the portrait look like the person or you don’t get paid.”

Bob is also a practical artist. “I think like a businessman. I am not interested in sitting around with other artists and talking about art.” One has only to look at his website to realize the marketing talents of Bob and especially his wife, Barbara, a Savannah belle. Many Savannah-ites claim a relationship with favorite son, songwriter and performer Johnny Mercer, but Mercer actually performed at her wedding. Barbara, at one time, was visual manager for Williams-Sonoma in Chicago and is currently working as a Realtor in Door County. Bob proudly describes her as “the key to the whole thing…the life force, so to speak.” The second marriage for both, it was “love at first sight” and when they married in October 1995 they left Chicago’s big city “rat race” and moved to Door County. It was the first and only destination in their minds because Bob fondly remembered it as a place of peace and security from his many summers spent in Ephraim as a child.

This “follow your bliss” philosophy seems to be a Bob Bentley trait. Just as he was becoming a Yale-educated, successful, young Chicago stockbroker he abruptly decided he hated it all, jumped off the merry-go-round and became a portrait artist; but the businessman in him soon asked, “What’s the quickest way to make it as an artist?” He used all of his contacts within the Chicago business and academic communities and went after the “biggies.” His aunt Susie had a connection to the Solti family and with that commission he was off and running.

Bob’s insight into painting portraits is wonderfully pragmatic:  “The problem with portrait painting is you really have to get it right. No one likes pictures of themselves so I present [a series of] three sketches with the first being not-so-good and the last agreed upon as just right.” He sends digital in-process photos to the client to keep them “aboard” because “there is nothing worse than surprises.”

In addition to his business acumen and pragmatism, Bob is a humorist and a romantic. He was born in New York City to two very much in love young “artists” who Bob says “had no idea how to make a living.” His father would don a top hat and tails, his mother a gown and long gloves, and they supported themselves by entertaining at ladies’ luncheons in Manhattan. Eventually they ran out of money and returned home to his mother’s family in Evanston, Illinois where his father became part of a successful family business.

Bob’s father died while Bob was still in high school and his uncle became his surrogate father. He followed in his uncle’s footsteps to Yale University where he majored in the History of Arts and Letters and worked at the Yale Art Gallery as part of his scholarship, setting up slides for eminent art historian Betsie Chase. Along with this fine art experience and education, he was the editorial cartoonist for the college humor magazine. Bob has kept one foot in each camp ever since. In fact, it is one of Bob’s most endearing qualities, according to one of Door County’s beloved artists, Franne Dickinson:  “He’s a wonderful portrait artist and his ‘Whimsies’ are very clever; he has that very important element of humor that feeds whatever style he’s working in. It’s good for artists to think about humor, sometimes we take ourselves too seriously.”

Look at “The Artist’s Reception,” one of Bentley’s “Whimsies” to see a wonderful satire on society’s treatment of the artist. It shows the typical well-attended soirée honoring the artist and his work but no one is looking at either the artist or his work – they’re too busy having deep philosophical discussions about art, seeing who else is there or air kissing hellos and goodbyes.

The character of artist George Seurat in the Sondheim Broadway musical, Sunday in the Park with George, sings:  “Art isn’t easy. Advancing art is easy. Financing it is not. A vision’s just a vision if it’s only in your head. If no one gets to see it, it’s as good as being dead.” Sondheim is describing Bob Bentley’s raison d’etre. He, as an artist, works hard to produce beauty from deep within himself and adds a dash of humor as he goes along. But the work isn’t complete until it’s in the world for all to see and that’s what makes following his bliss all worth it to R.D. Bentley, the man of many faces.