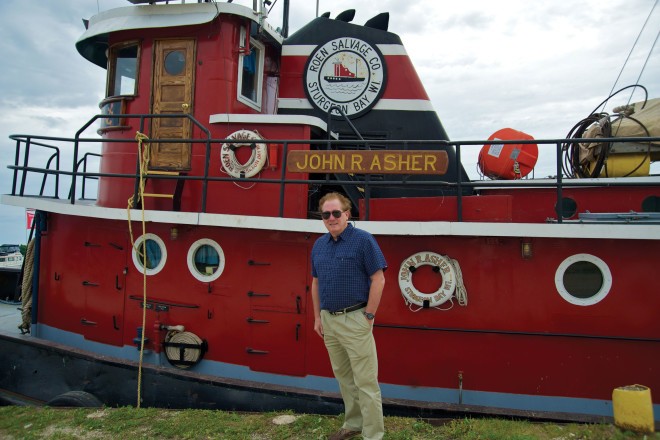 2009 was the most successful year yet for Roen Salvage in Sturgeon Bay, and 2010 is looking up as well. Earlier this year, Roen received the Industry of the Year award from the Door County Economic Development Corporation in recognition of the company’s long-standing impact and accomplishments in the community. They also recently announced they had secured a $2.1 million contract to dredge the Port of Green Bay.

While the sign outside their Redwood Street offices reads “Established in 1949,” the company’s ties to 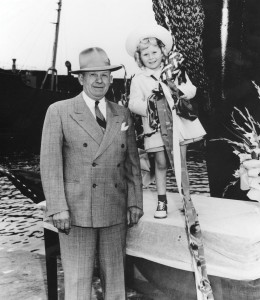 this community run much deeper than that. Current President and CEO John Roen Asher is proud of the continued success but knows the company’s roots stretch back through the generations to his parents Charles and Hilda Asher and, ultimately, to his grandfather and namesake John Roen. John Roen came to this country a Norwegian immigrant whose life and professional experience met opportunity at the crossroads of history. His is a maritime tale that bears repeating and understanding his journey makes the current success of the company that still bears his name all the more sweet.

John Roen was an affable young man with eyes as clear and blue as the Norwegian Sea when he came to the United States from Tysse, Norway in 1906 as an 18-year-old. Young John had very few resources, but he was a hard worker and spent two years in Illinois as a farm hand to pay off his passage. Once he had satisfied his obligation and was free to move on, Roen returned to the water and took a job as a deckhand on a lumber barge on the Mackinac Straits.

With some savings to fortify him, Roen branched out on his own and built a gas-powered, wooden tug, the Redwing, which he used to make money towing pulpwood. As his business grew, each season he added another vessel, including the wooden tug Marquis Roen, named after his son, that he and his men built by hand at his small sawmill at Charlevoix, Michigan.

His growing success allowed Roen to travel to Norway to see his family, and on each trip he would bring back hard-working men from his village who became known as “Captain Roen’s Norwegian Navy.” These were men of solid character, possessing physical attributes, who knew the sea and were in search of a better life. In exchange for passage to the United States, they agreed to work off their debt on Captain Roen’s tugs and barges, after which they were free to leave, although none of them ever did. John treated his men well and in return he received their loyalty, hard work, and ingenuity – strengths that would be vital in the years to come.

By the time he moved his company from Charlevoix to Sturgeon Bay in 1931, “Cap” Roen was a 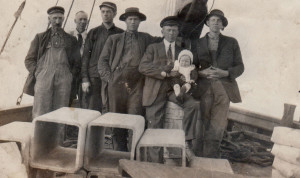 successful businessman who had parlayed his work ethic and keen business sense into a fleet of barges and tugs. His company, Roen Steamship, was one of the largest and most well-respected shipping companies on the Great Lakes. Already successful beyond his dreams, Cap Roen’s most legendary accomplishments were yet to come, and Sturgeon Bay would serve well as the headquarters of his growing maritime company.

In 1933, Captain Roen remarried a Norwegian woman, Solveig Veseth, and added two more children to his family of son Marquis and daughter Hilda. John Roen Jr. was born in 1936 and his sister Sonia was born in 1942.

Always a visionary, Cap recognized an opportunity to diversify his salvage, transport and construction operations and, in 1934, purchased a half interest in the Sturgeon Bay Ship Building and Drydock Company, which is still in business in Sturgeon Bay under the Fincantieri Group. Although he had no way of knowing it then, with Hitler in power in Germany and World War II just over the horizon, owning a shipbuilding business would prove to be a very profitable venture. Over the course of the war, his company secured government contracts and built $10 million worth of ships a year for the Army and Navy, solidifying Roen’s place as a major employer of local workers.

For all of his success, John Roen was not immune to tragedy. In July 1943, his seven-year-old son, John Roen Jr., struck his head and drowned while playing near a dock. Grief stricken, Captain Roen would channel his loss into the greatest accomplishment of his career and, in doing so, would bring a tremendous sense of pride to his company, his family, and his hometown of Sturgeon Bay.

A month before the loss of his son, Captain Roen had been asked to bid on a salvage job to raise the George M. Humphrey from the Mackinac Straits. The 600-foot freighter had gone down loaded with nearly 14,000 tons of iron ore in dense fog after colliding with the D.M. Clemson on June 15, 1943. The ship lay in approximately 75 feet of water in the middle of a shipping lane of treacherous currents and 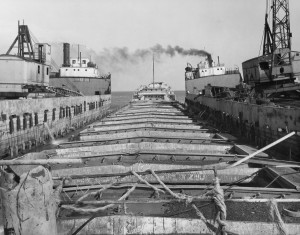 presented many problems for navigation. Although a salvage expert who knew those waters better than almost anyone, Captain Roen declined to bid on the project. It was not until after John Jr.’s death that Roen reconsidered, and in the fall of 1943 John Roen agreed to take on the task of raising the Humphrey. If he could raise her, he would own her. If not, he would get nothing and would have to absorb the salvage costs. There was much to lose, and even more to gain.

That fall, Captain Roen and his crews salvaged 9,000 tons of ore from the freighter, lightening her load significantly. Through the winter of 1944, Roen sketched out calculations and drawings and built models of how he would raise the Humphrey. He practiced in his bathtub and later in tanks with scale models until he and his crew were sure they knew how to raise the ship.

In the spring, buoyed by months of practice, Captain Roen and his men set out to raise the Humphrey. In a series of maneuvers, Roen positioned a barge over the wreckage and filled her ballast tanks with water, effectively sinking the barge to its lowest point in the water. Divers then tightened the cables that attached the barge to the Humphrey and the water was pumped out of the barge’s ballasts, thus raising her from the floor of the straits by six to eight feet. The Humphrey could then be towed to shallower water and gently touched down. The maneuver would be repeated, eventually using two barges, one on either side of the sunken freighter. After much careful work, the ship was raised to the point that the hole in her starboard side could be patched. On September 18, 1944, the Humphrey arrived under the tow of the tug John Roen III into the Bay of Sturgeon Bay. The freighter was welcomed to town by an enthusiastic crowd that had gathered along the route to celebrate what Popular Mechanics called “a feat unparalleled in American Marine history.”

John Roen would continue to be a forerunner in maritime accomplishments, winning the tug races in Detroit in 1952 and 1953 and launching an Atlantic fishing fleet out of Boston, which was run from Sturgeon Bay. Roen would also be on the forefront of another Door County industry when he purchased 425 acres of cherry and apple trees in Ellison Bay, called Roen’s Orchard. 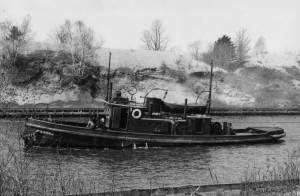 John Roen’s daughter Hilda and her husband Charles Asher would launch Roen Salvage in 1949 and run it until 1985 when their son and current President, John Roen Asher, took over. There have been lean years for the company, but by diversifying and providing great service and end results, Roen Salvage has managed to survive and thrive as Great Lakes marine contractors. In the process, the company has provided long-term, well-paying jobs to county residents and has remained very active in the community.

To learn more about John Roen’s maritime legacy, visit the John R. Asher Gallery at the Door County Maritime Museum in Sturgeon Bay and take a tour of the tug John Purves, a vessel brought back to Sturgeon Bay and refurbished in large part due to the Asher family’s efforts.

Roen Salvage is a marine construction company specializing in dredging, stone breakwater and offshore construction, and hydrographic surveys. They provide jobs for 21 full-time employees and up to 25 seasonal workers and have been recognized as Contractor of the Year by the U.S. Army Corps of Engineers.