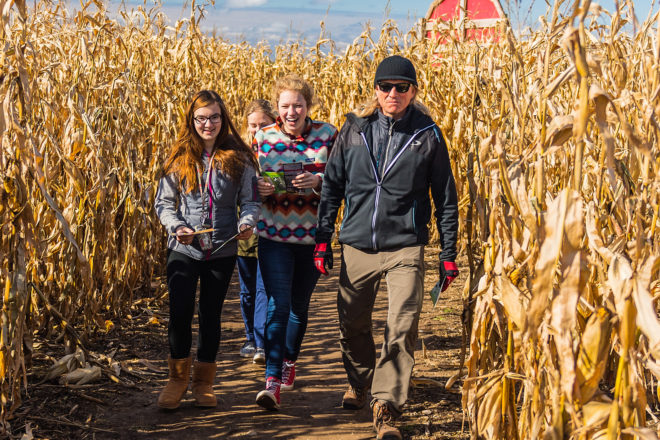 Fall is in the air. The leaves are changing colors, the temperature is dropping and orchard trees are heavy with apples. In other words, it’s time to put on the flannel, pack up the family and head to a corn maze.

The county hasn’t had a corn maze for a few years, but the activity is making a comeback, with Wildwood Market in Sister Bay, DENN in Gardner and the Red Barn Corn Maze in Forestville opening one for the first time this year.

“The idea first came to us last fall while we were spending a weekend away in Michigan with our two youngest children, 15 and 9, and looking for something we could all do together,” said Jan Guilette, who owns Red Barn with her husband, Kevin. While waiting for a hayride, Kevin and Jan sat on a bench and watched their two daughters laughing and racing each other up the hay-bale mountain. Kevin was inspired.

“The world needs more days like this,” he thought, so he started on the journey to creating a maze with families in mind.

In addition to the 10-plus acres of maze, guests can explore more than two and a half miles of trails, test investigative skills by finding the checkpoints and solve the “farm scenes investigation.” There are also hayrides, corn hole, mini bowling, a scavenger hunt and farm animals.

DENN in Gardner also has activities for kids, but because its owners want to extend the fun time to parents and adult groups, there’s a bar area for refreshments.

“It’s been a big hit with the parents and for outings like adult birthday parties, bachelorette parties and date night,” said Milissa Kloida, who owns DENN with husband, DJ.

But it’s not all about the bar. The 12-acre maze is a fun adventure loaded with 11 games to play. The results of each game tell participants which path to take next, but will it be the right path? There’s also a picnic area, playground and lawn games on the grounds, and DENN is hosting food trucks weekly.

Although Milissa and DJ were always interested in opening a corn maze, they weren’t sure where to start. Not being farmers, they hired a motivated neighbor who took over planting the corn and pumpkin field, and the Kloidas designed and cut the maze.

“Our favorite part of this experience has been working on this project as a family,” Milissa said. “We walk the maze together almost every day, also to pick up garbage and check on things, so it’s been a really great bonding experience!”

When it came to maze design, Jan Guilette wanted to feature the farm as well as its offerings. She started by using graph paper that matched the dimensions of the field to draw her design, and she then counted rows in the field and put flag markers along the way for the mower to follow when cutting the field. All told, it took about 10 days to cut the field.

“It was exciting to send the drone up periodically to track the progress and see that our method actually worked!” she said.

In addition to the main maze, the Guilettes, with encouragement from their kids, decided to cut a shorter, separate maze in the back to offer a haunted experience during October weekends.

“We found that a lot of people, including our family, really miss the haunted mansion that Southern Door School District put on for many years,” Guilette said. “Although walking through the corn at night is a bit spooky all by itself, we gathered ideas from online, other haunted houses we’ve visited and our own imagination to make it even scarier.” The haunted maze has actors of all ages throughout, as well as unexpected noises, lights and other spooky elements. The haunted maze is open only on weekends in October, but if the attraction is popular, they may add a few impromptu nights.

Up in Northern Door, Wildwood Market in Sister Bay has opened its first corn maze, which will remain open until mid-October. Guests can also enjoy interactive games and snacks and stop by the pick-your-own pumpkin patch.

And while you’re up north, stop by Seaquist Orchards for the straw maze. Every year, Seaquist transforms its greenhouse into a three-layer maze made from straw bales. There are also lots of fall flavors to enjoy: apple-cider donuts, fritters, pies and much more.

After only the first weekends of running their new attractions, the owners at DENN and Red Barn are already brainstorming new ideas for next year.

“Many people commented that they will be coming back again next year, and it has always been our plan to make this an annual fall event,” Guilette said. “We had more ideas for games and activities than we had time to create, which will just make it a new and bigger experience next year.”

To find more details and pricing for the Red Barn’s corn maze, visit redbarnmaze.com. Learn more about DENN’s experience at dennshop.com. And there are more details about Seaquist Orchards and Wildwood Market on Facebook.