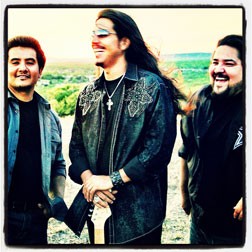 On June 18, Door Community Auditorium will present an evening of “Texican” music by the passionate, searing and immensely talented Los Lonely Boys. With Roger Clyne and The Peacemakers providing a high-energy opening set, the evening will be filled with masterful guitar work, irresistible grooves, and unshakeable pop appeal.

Los Lonely Boys are three brothers from west Texas who have stirred themselves into America’s musical melting pot with their unique style of Texican music—a carefree mixture of driving rock, Texas blues, swaggering country, and lively Tejano beats. Guitarist Henry Garza and his siblings, bassist Jojo and drummer Ringo Jr., grew up playing conjunto music behind their father in cantinas and honky-tonks.

As adults, the Garza brothers formed their own band, grabbing the attention of the music world in 2004 when their debut single “Heaven” became a number-one Billboard hit. Five albums and a decade later, these Grammy Award-winning brothers continue to draw devoted audiences across the world.

Opening act Roger Clyne & The Peacemakers (RCPM) will kick off the evening with a set of vivid lyrics, addictive guitar riffs, and unadulterated Southwestern rock and roll. On more than a dozen studio and live albums over the past 15 years, RCPM have consistently produced nothing but unadulterated rock and roll, building a reputation as one of the hardest working touring bands in America.