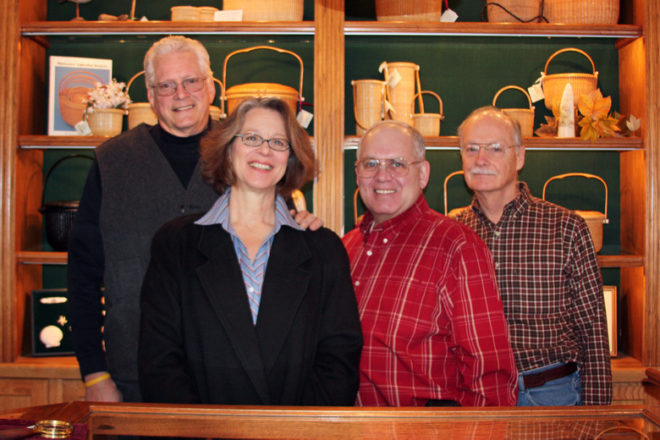 I was halfway through an interview with scrimshander Gary Kiracofe in a back room of Door County Scrimshanders when several voices coming from the front of the shop derailed my attention. A couple had entered the shop and was talking to Dawn Sandusky, Kiracofe’s wife and the shop’s manager and co-owner. The man was effusive. He said that they were tearing up on their drive to the shop, knowing it was going to be the last time they’d be stopping there.

After 40 years of operating a scrimshaw business – 26 of those years out of the Shops of Green Gables in north Ephraim – Kiracofe and Sandusky will close Door County Scrimshanders this month. The people I heard during the interview are an example of the loyal following that Kiracofe and Sandusky have cultivated throughout those years of creating and selling the niche fine art of scrimshaw.

According to Kiracofe, he’s always had a knack for drawing an image exactly as it appears in real life. And it’s a familial talent: he and his two brothers are all scrimshaw artists, an interest developed through childhoods spent visiting Cape Cod.

When asked how he got into the business, he said, “It depends on how far back you want to go. We got exposed when my dad served in the Coast Guard in WWII in Provincetown [Massachusetts]. We would go out there [to Cape Cod] from Ohio every five years. The cape’s kind of like Door County. There’s a lot of towns just like here. My older brother loved the cape, and he spent his college summers painting houses out there. That’s where he was exposed to it in the late ’60s, and what created an interest.”

Nantucket, a tiny island off Cape Cod, was a hub for whalers during the 1700s and 1800s, and it was American whalers who created the art of scrimshaw – etching on ivory or bone – by engraving on sperm-whale teeth between whale hunts.

The other Cape Cod connection that attracted the Kiracofe brothers was that President John F. Kennedy – who owned a home in Hyannis Port, Cape Cod – was an avid collector of scrimshaw. Kiracofe said that the only thing that’s buried with Kennedy is a tooth with a scrimshaw portrait of the late president and the presidential seal.

“It was his most prized possession, and that inspired a whole other generation of artists,” Kiracofe said. “It fit my skill set. Both of us [he and his older brother, Dan] could draw things like they looked.”

It was after the brothers’ first experience with attempting scrimshaw that he knew it was for him. “At Christmas,” Kiracofe said, “we went to the local dump and found an old piano, and pulled the keys and steamed them, sanded and buffed them by hand, and began engraving designs on the piano keys.”

His brother went on to open a shop on the East Coast while Kiracofe went back to Ohio, where he created his own scrimshaw merchandise to send to his brother to sell in his shop. In 1979, Kiracofe and Sandusky opened their first shop on Michigan’s Mackinac Island. They operated the shop and lived on the island until they moved to Door County in 1993.

“We are probably the only people who moved to Door County for bigger schools and more socialization,” said Kiracofe. “What we liked about Door County was the arts and how well they were represented. In the UP, sports and hunting were the two main things. Quality education – that’s what attracted us – and we had a number of people who came in who told us that we should check it out.”

They continued to own and operate the Mackinac Island shop, traveling back and forth with Ephraim as their home base, until they sold it in 2015.

All the while, Kiracofe was creating merchandise, shifting from piano keys to engraving on more traditional materials, including the two that are most frequently used today: mammoth ivory bark and fossilized walrus ivory. He said it takes about 40 hours to create one of his artworks – decorative engravings to works of art on knives and money clips – with most of the time going to making myriad tiny scratches and dots. While engraving, he listens to books, and when he needs to research how something should look, he looks up photographs on his computer to get the details and angles just right.

Kiracofe’s least-favorite project was working on earrings, but he knows they paid the bills. He said, “When I had both stores, I probably worked eight months a year just to make things that pay the bills. If I had advice for a young artist, it would be: To pay the bills, you have to make those rosebud earrings. I hated making them, but that was how you made money. I still make a whole lot of cherries; those were the bread and butter.”

Even though Kiracofe is the artist behind the shop, he is quick to point out that he and the shop wouldn’t be successful without Sandusky. From the start, when the shop’s square footage was small, “Dawn did a very good job,” he said, “and carefully added people and products and made it look like it was more valuable than it was … And it’s her everybody comes to see.”

Through 40 years of being in business, Kiracofe said that the rise of online shopping has definitely changed things, but “we’re fortunate to have something that you can’t buy on Amazon … When they walk in here, they can’t find this merchandise on Amazon, and we kept it that way, and no one could duplicate this work.”

In addition to being the smiling face at the front of the shop, Sandusky also maintains the Door County Scrimshanders Facebook site, which will still be active once the shop is closed. During the past three years, the couple has also been collecting emails from their clientele and will stay in touch whenever Kiracofe completes an artwork. They’ve noticed that when Sandusky posts photos of a finished piece, it’s often sold before it’s ever in the shop.

“We’re realizing we don’t need the brick-and-mortar in the same way,” Kiracofe said.

Perhaps amazingly, he isn’t sick of scrimshaw, even after four decades. It’s his natural calling, and he still feels the pull to represent the world through a series of lines and dots. Now he can be much more selective about what he creates, though, and I’m guessing cherry earrings won’t be part of his future.

To stay up to date with Door County Scrimshanders, go to facebook.com/Door.County.Scrimshanders.