There are several places where Charlotte and I have had the great pleasure of having butterflies land on us and the outstretched hands of children. The excellent butterfly house, an outdoor enclosure, at the Mosquito Hill Nature Center near New London, Wisconsin makes use of native butterflies and specializes in outstanding hands-on experiences and topnotch education of young people. Susan Borkin has helped develop the great Butterfly Wing at the Milwaukee Public Museum where similar butterfly study takes place.

Several years ago we spent two days in early spring at the famous Callaway Gardens in western Georgia where their Cecil B. Day Butterfly House ranks as one of the finest in North America. Exotic butterflies of many species are reared in great number and surround you during your leisurely walk through the large enclosed garden. People of all ages enjoy the close and personal visits of the winged beauties. 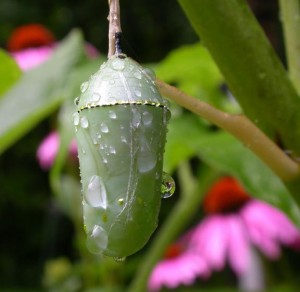 A Monarch chrysalis wet with rain.

There is no native butterfly of our region that has more frequently landed on us in past summers than the Mourning Cloak, undoubtedly relishing the salts and minerals contained in the perspiration on our skin.

My latest “eye-to-eye” meeting with a butterfly perched on my fingertip took place in our front yard several days ago. We had watched our large native Swamp Milkweed plant be gradually eaten to shreds by a few dozen Monarch caterpillars in the past couple weeks. However we were unable to locate their jade-green, gold-studded chrysalids anywhere near the raised bed containing the Monarch host plants.

I had been sitting on the Aldo Leopold bench on our front patio watching the hummingbird activity as I waited for our friends, Paul and Leona, to arrive. Suddenly I noticed the wing-fluttering of a Monarch clinging to the underside of a zinnia leaf in the flower bed along our front sidewalk around 15 feet away. Upon close examination I saw the empty chrysalis within a few inches of the butterfly, which now was exercising and pumping body fluid into its wings. I quickly fetched my small digital camera and took many images of the unfolding drama.

Next I came up with the idea of getting the gorgeous orange and black creature to cling to one of the fingertips on my left hand while I photographed the butterfly with my right hand – mission accomplished! Within a few minutes Paul and Leona arrived to also enjoy the butterfly fearlessly clinging to my hand. Finally, after the three of us had been held in awe by the female Monarch, she began flexing her wings up and down, and suddenly took off on her maiden flight – up, up and away! What a thoroughly humbling experience that proved to be. 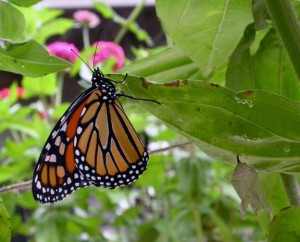 The enclosed Monarch showing its empty chrysalis at the lower right.

A few days earlier I had discovered a Monarch chrysalis attached to the tip of the remains of a Swamp Milkweed leaf on the threadbare plant in our raised bed. The chrysalis was in the so-called imago stage, when you can easily see the image of the soon-to-eclose (emerge) Monarch. We were sure that it would be several days before the adult butterfly would eclose but, surprise, surprise, it happened while the chrysalis was still quite green. Perhaps it was the unusually hot weather that hastened eclosure, which ordinarily requires around two weeks after the chrysalis is formed.

Our guess is that this female will soon be bred, lay eggs and her offspring will be the ones, prompted by a “genetic trigger,” that will finally leave Door County in mid-September. Aided by their internal compasses and so-called inherited behavior, they will begin their long arduous flight to the Michoacan area in the mountains of central Mexico. These Monarchs will not become sexually mature until the early spring of 2011 when they will mate, head north out of Mexico around the time of the Spring Equinox on March 21, lay eggs on one of many species of milkweed plants to start another generation, and finally die. It will be their offspring who will arrive back to Door County late next spring.

I’ve learned a great deal in reading the book, The Monarch Butterfly International Traveler, by Dr. Fred A. Urquhart, for many years the renowned Monarch researcher from the University of Toronto in Ontario. The latest edition of this book was published by Wm Caxton Ltd, Ellison Bay, where it is for sale. One point I found very exciting in the book was learning that there have been a few occasions, proven through tagging the adult Monarchs, that the same adult Monarchs that left some northern locations, such as Ontario, Canada, then wintered in Mexico, returned (in very worn condition) to the same area where they had eclosed the previous year! Dr. Urquhart refers to this as an annual remigration, whereby the butterfly migrates southward in fall, spends the winter, and migrates back northward the following year toward the site where it had hatched the previous summer. 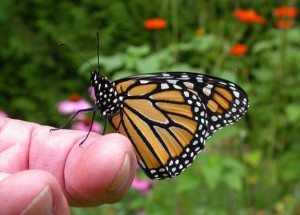 The female Monarch perched on the author’s finger.

Our first sighting of adult Monarchs at our place this past spring was our earliest ever, May 24. Naturally we expected a banner summer for these well-known and loved butterflies but, for reasons unknown to us, we saw very few during much of June and into mid-July. Finally they began showing up in our yard and quickly laid many eggs on especially the tall Swamp, or Red, Milkweed and also the Mexican Milkweed plants growing in our Monarch “Way Station.” Plants growing in this raised bed provide the larvae with their host plant food and the adults with nectar.

Every year it appears as though the Monarch butterflies are continuing to “hold their own” in spite of problems in both their summering and wintering environments. Dr. Thomas E. Lovejoy of the World Wildlife Fund wrote in the Defenders of Wildlife magazine, April 1982: “The future of the Monarch migration to Michoacan depends on a biological and political situation as fragile as a butterfly’s wing.”

We hope that you too continue to observe and enjoy one of the greatest insect spectacles on earth, that of the international traveler, the Monarch Butterfly.