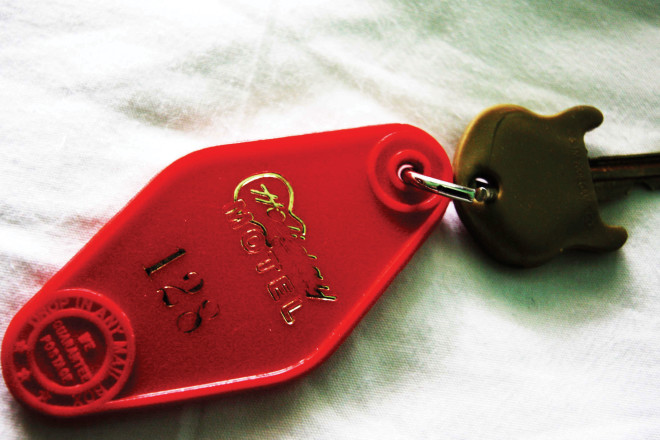 Before I even begin, I’d like to clear something up about Sturgeon Bay’s Holiday Music Motel:  it’s not a music-themed hotel like one would find in Las Vegas or Nashville or Branson, Missouri. There’s no life-sized neon guitar at the helm of the building, no vintage rock ‘n’ roll costumes for viewing in the lobby, and no autographed photos of legendary recording artists. However, there is a built-in recording studio on the second floor, with a Grammy-nominated sound technician living in house. You really can’t get much more “music” than that. 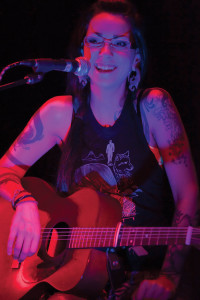 The story of the Holiday Music Motel begins in 2006, but the need and want of a place for musicians to congregate, collaborate, and record had started much earlier, when Rock and Roll Hall of Famer Jackson Browne told his friend and nationally-known recording artist (and Door County local) pat mAcdonald [sic] about an idea he had. “He envisioned opening up a trailer park where musicians could come and record together,” mAcdonald says. “I remember telling him, ‘Why don’t you come and check out this cool motel in Door County?’”

Browne never quite made it to Sturgeon Bay to check out the Holiday, but with the advent of the popular Steel Bridge Songfest, the Holiday was pushed back into mAcdonald’s thoughts, this time with the help of visiting musician Anna Sacks. (The Steel Bridge Songfest [SBSF] is an annual community historic outreach event designed to raise local, state, and national awareness of Sturgeon Bay’s Michigan Street Bridge through original songs written and inspired by the bridge and volunteer public performances from musicians across the country.)

“2006 was the second year of Steel Bridge, and it was the first year that we initiated the ‘Construction Zone,’ which is a week of songwriting workshops leading up to the SBSF event,” mAcdonald says. “The Construction Zone took place at the Holiday, and it was an awesome experience for Anna. She didn’t want the week to end. At the end of the workshops, she came up to me and said, ‘pat, I have this great idea. Why don’t we buy a motel?’ I’ll never forget the look on her face – she was beyond excited.”

mAcdonald told her that the Holiday Motel was actually for sale and immediately went to speak with Pete and Marilyn DeVaney, who were the motel’s owners at the time. “They had a few people interested, but no one serious,” mAcdonald says, “so we sprang into action pretty quickly.” Between Sacks, mAcdonald, and mAcdonald’s sist 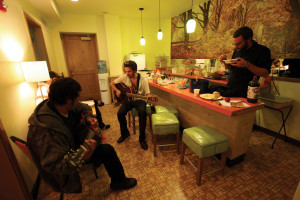 er Christie Weber (with mAcdonald, a co-founder of Steel Bridge Songfest), they were able to secure a handful of like-minded investors to purchase the Holiday Motel – one of those investors being Jackson Browne.

The group opened the Holiday in time for Steel Bridge Songfest’s second Construction Zone workshop in 2007. Over 60 songs were recorded over the week leading up to the festival, a CD was released of the songs from the year before, and several workshops for musicians were being planned for the fall and winter months.

“The motel symbolized collaboration, and it was acting as a point of convergence between the local artist scene and musicians from all over the world. We didn’t want to compete with any of the other music venues or what anyone else was doing – it was really just going to enrich the scene and the businesses that we already had here. At the end of that Construction Zone workshop, it just felt like everything was working…everyone couldn’t wait to come back,” says mAcdonald.

Six weeks after the Construction Zone workshops (and one day before mAcdonald’s birthday), the Holiday experienced a major electrical fire. The fire did extensive damage, and the owners were forced to close it for repairs. “The fire was like hitting a brick wall; all the momentum we h 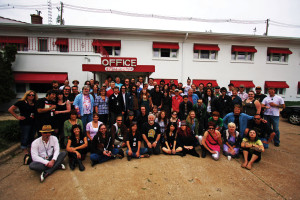 ad in those early weeks [was] lost,” mAcdonald says. Various insurance and construction issues delayed the reopening of the motel for two years, and mAcdonald admits that he really had to focus to keep his spirits up.

“During that entire time, I never let anyone turn off the sign,” he says, referring to the motel’s original outdoor neon sign, in place since the early 1950s. “I thought if we let the sign go out, it would be like admitting defeat.”

The Holiday Music Motel reopened in June 2009, the day before the Fifth Annual Steel Bridge Songfest. “We had the inspectors here at the same time as the songwriters; it was crazy,” mAcdonald says. Only half of the motel was set to open at the time, but it didn’t seem to matter. The old feeling of the motel and the music was there, and it was there to stay. Ever since the motel’s reopening, musicians from Door County and all over the country have come to use the digs as a space for creating and collaborating with other traveling musicians, and the management team at the Holiday have worked hard to create a space where music and other forms of expression can be enjoyed all year round.

“Steel Bridge Songfest was the catalyst for the vision of the motel, but it’s not the only musical endeavor we support,” says mAcdonald. There has been a series of events that has strengthened the motel’s vision of nurturing the peninsula’s music scene while importing energy and inspiration from the outside music world. One is the popular Holiday House Concert Series, which began in December 2009. The house concerts are held in the motel’s second-floor “living room” studio and can seat up to 50 concertgoers. Jackson Browne flew in for th 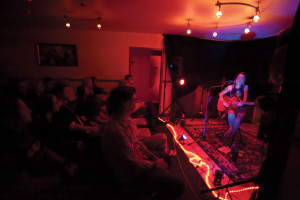 e inaugural House Concert, followed by a concert called “Purgatory Hilton,” in which Purgatory Hill bandmates pat mAcdonald and melaniejane recorded an entire album in the Holiday Music Motel studio. New Zealand-based folk and blues artist Delaney Davidson headlined a house concert of his own this past August, and at press time the fourth Holiday House concert was set to feature Bulgarian-born singer/songwriter Geri X in a late October 2010 concert.

A popular offering is the Holiday’s weekly Writers’ Night, which occurs every Thursday night throughout the year at 7:00 pm. “Writers Night is really a coming together of the community,” says Lauren MacDonald, who, in addition to being the motel’s Marketing and Events Manager, is also mAcdonald’s niece. Songwriters, poets, comedians, and other artistic members of the community and visitors are invited to share their work from week to week, and those who don’t want to get up in front of an audience are welcome to simply sit and enjoy the action. Another event, called Dark Songs, is a week-long songwriting event that occurs at the end of October at the Holiday and culminates in two concerts (called the “Edgar Allan Polka” and “Ghost Writers in Disguise”) on the Friday and Saturday of Halloween weekend at two Sturgeon Bay venues, the Ladder House and Cherry Lanes. 2010 marks the second year for the Dark Songs workshop, and will feature many artists that come to Door County for Steel Bridge Songfest.

Operations Manager Jillian Nelson says, “The nice thing about these smaller, off-season events is that they work together to bridge the excitement that is created through Steel Bridge. We want that kind of excitement year round.” 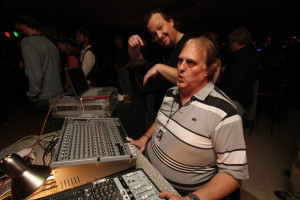 Above any event that the motel puts on, many musicians close to the motel say the Holiday provides a creative outlet and respite for them above anything they’ve ever known. “This place is honestly my second home,” says melaniejane, a Milwaukee musician who was invited to Steel Bridge Songfest first in 2007 and is now deeply rooted in the goings-on of the Holiday Music Motel. “It’s a place where musicians can regroup and go out into world inspired.”

For more information about the Holiday Music Motel and its musical offerings, visit www.holidaymusicmotel.com or call (920) 743-5571.