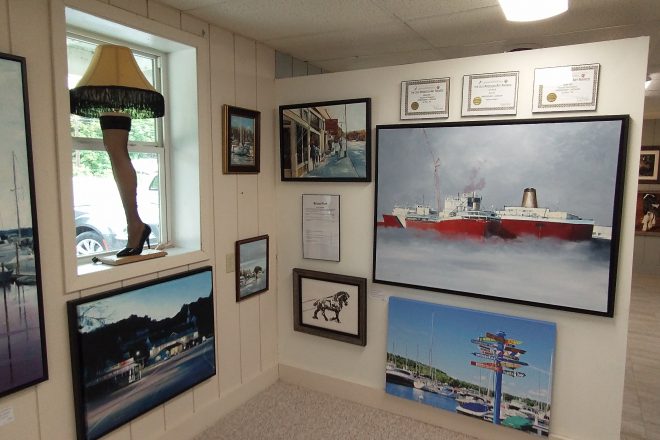 Jim Riead has transformed his former beauty-salon building into Door County Arts Guild Gallery – a stop for fine art along Highway 42 between Carlsville and Egg Harbor – and five local artists were present to share their art during a recent opening reception.

Riead’s method of selecting art to include in his gallery was straightforward: For prints, he contacted artists whose work he enjoyed from various categories of the American Art Awards. For originals, Riead wanted to feature local artists, so he ran an ad to find area artists who wanted a new home for their work.

The Arts Guild Gallery mostly features framed wall décor that varies greatly in medium and subject matter, allowing for endless thematic combinations. Each artist brings a unique background and creative passion to the gallery, but they are united by some connection to Door County.

When Nan (Zwicker) Wallschlaeger retired, she began painting again, as she had during college. Zwicker paints what she loves to photograph: subjects that evoke memories of her family’s farm and a sense of peace.

Among the rustic landscapes of her childhood, she’s specifically drawn to cows. Unlike farmscapes that often place animals in the background or middle ground, cows are clearly the stars of Zwicker’s work: Their faces take up the majority of her canvas as they look right at the viewer with a level of detail that gives the animals an emotional quality. More recently, Zwicker has started painting pelicans in a conceptually similar manner.

She typically paints for three to four hours each day in the morning or afternoon.

Brian Pier never strays from his preferred medium of oil paint, but with it, he paints anything from marine scenes to shopping in downtown Fish Creek. Pier studies the great painting masters of the 19th and 20th centuries, which is evident in his impressionist style. He enjoys how oil allows him to paint with attention to light.

Similar to Zwicker, Ann Perrizo returned to making art in semi-retirement after a 30-year hiatus. She attaches handmade paper and found objects to her canvases to create multidimensional, mixed-media compositions.

Perrizo’s method of paper-making involves soaking pulverized cotton fibers in a vat of water and a chemical binder. She dips screens into the solution, drains the water and stretches the material into rippled shapes. She gradually airbrushes the resulting pieces of paper, sometimes going over the same piece 30 or more times to achieve her desired layers of color.

“My work is based on waves and water and the shapes I see within them,” Perrizo said.

The texture, flexible shape and hues of Perrizo’s paper suit the theme of her work well and provide interesting abstract representations of water. Pieces such as “Where’s the Beach?” and “Happy Hurricane” resemble the unpredictable, swirling waters of Lake Michigan or an ocean coast.

Seth Taylor’s ink paintings make the viewer pause to ponder what type of art they’re looking at. He describes his work as a “synthesis of Asian and Western technique.”

As a draftsperson, he sought an artistic challenge and a medium that was different from his photorealistic sketch work, so he learned the difficult practice of ink brushwork while he studied in eight Asian countries for more than 30 years. Now he applies the painting technique to subjects such as deer and bears in the wild.

“It’s a neat adventure working with these materials that have developed over thousands of years, and then to interpret them,” Taylor said.

Ink painting requires lots of trial and error – mistakes are irreversible and difficult to cover up – but his mastery creates final paintings that beautifully bridge Eastern and Western art.

For the Door County resident or frequent visitor, Sheila Grace O’Gara’s photographs register a sense of recognition. For 30-plus years, she has driven along the county’s roads, pulling over to capture images of iconic places such as the shores of Ephraim, winding sections of Highway 42 and even the ivy-bordered windows at the Peninsula Pulse office.

“There’s always something [to photograph],” O’Gara said. “I have my camera in the car with me all the time.”