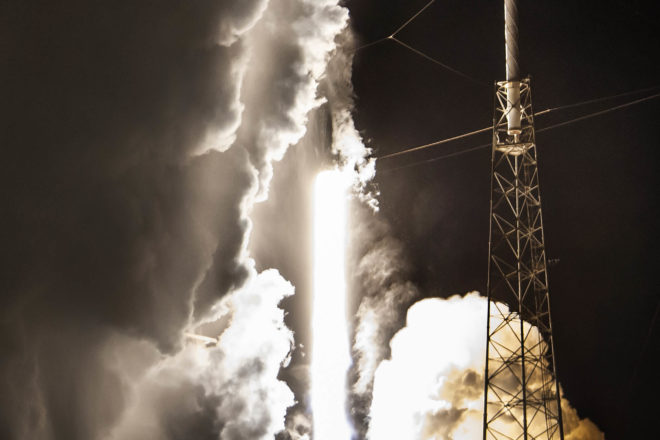 On May 23, 2019, SpaceX launched its first 60 Starlink satellites on a Falcon 9 rocket from Cape Canaveral, Florida, into an operational altitude of 340 miles (550 kilometers). Shown above is the Falcon 9 on its first launch of this year, Jan. 8 – its 50th flight of a previously flown booster. To date, SpaceX has launched 900 Starlink satellites, according to the Federal Communications Commission. Source: Starlink Facebook page

If you’ve noticed a linear, pearl string of lights gliding low and uniform from a northeasterly direction across the evening sky, you’ve witnessed not an alien encounter but a Starlink satellite train.

Door County has become a public beta testing site for SpaceX’s emerging satellite internet service, Starlink. The company intends to deliver high-speed broadband internet to locations where access has been unreliable, expensive or completely unavailable. As it launches additional satellites weekly, its goal is none other than “near global coverage of the populated world in 2021,” according to its website.

Starlink is billing this round of testing as the “Better Than Nothing Beta,” which seems like a good way to undersell and overdeliver if you talk with some current beta testers.

Shannon and Kait Shanks of Baileys Harbor are two of them. The couple signed up in mid-November 2020 and received an email invitation in December. They’ve now had the equipment for a couple of weeks. The Starlink Kit – a user terminal to connect to the satellites, a mounting tripod and a Wi-Fi router – costs $499, or $579.20 with shipping and tax. The service is $99 per month, with no contract and no data cap.

Kait Shanks said they thought the monthly rate was a little pricey – until they tried the service.

“With the speeds we’re getting, which are phenomenal, it’s affordable,” she said.

The Shankses currently have Frontier service at their Highway 57 residence and have never achieved speeds like this.

Another beta tester is Nathan Drager, president and founder of Quantum PC in Sturgeon Bay. He said he’s finding typical speeds of between 75 and 150 Mbps download. But to him, the more exciting component is the latency, or the time it takes to beam packets of information through the vacuum of space from a device to the satellite and back to the device.

With a satellite service such as Viasat, Drager said the latency is about 500 ms, “and you feel it. With Starlink in low-earth orbit, the latency is 30 or 40 ms.”

Drager said he’s been tracking SpaceX for years. It now looks as though it may deliver on its promise to provide solutions for rural residents, such as those in Door County, who don’t have options for reliable, affordable or even available internet service.

“When COVID hit last year, I got requests that increased tenfold,” said Drager, whose company also provides internet consulting services. “All five school districts sent kids home for remote learning, only to learn 25 percent don’t have internet service. And you can’t do Zoom very well on Viasat [a satellite internet provider that operates in Door County], so it could be closer to 40 percent who may have internet and are considered covered, but it’s not adequate.”

Starlink’s aggressive goals depend on launching more than 4,000 satellites into low-earth orbit. When SpaceX’s CEO, Elon Musk, announced the plans in January 2015, he said that Starlink’s network would be able to provide “minor” internet coverage with 400 satellites and “moderate” coverage after about 800 satellites became operational. Starlink said it did not have anyone available to participate in an interview — “as you can imagine, it’s an incredibly busy time for the team,” someone unnamed responded from the SpaceX Communications team — but to date, the company has launched 900 satellites, according to public documents from the Federal Communications Commission.

The equipment that interacts with those satellites is designed for user installation: Just point the dish where the app recommends, and plug it in. The Shankses went the DIY route, and Kait Shanks said it took them about 20 minutes for the initial installation. But custom mounts to avoid trees and other obstacles may be required, and the line does have to penetrate the house. Those who don’t feel comfortable doing the installation themselves can hire third-party installers such as Quantum PC, which has installed a few kits already.

The beta users have experienced some downtime and lost connections. The Shankses moved their dish to a higher position away from tree obstructions and experienced fewer disconnects. But they’ll wait until after the trees leaf out in the spring before canceling their Frontier service.

As more satellites are launched, more voids will be filled, and fewer disconnects will occur. That could be exciting news not just in Door County, but for the estimated 430,000 rural Wisconsinites who lack broadband access, according to state figures.

“I think here in Door County, there’s a potential of 3,000-5,000 Starlink customers,” Drager said. “So it’s really revolutionary for a rural area like Door County.”