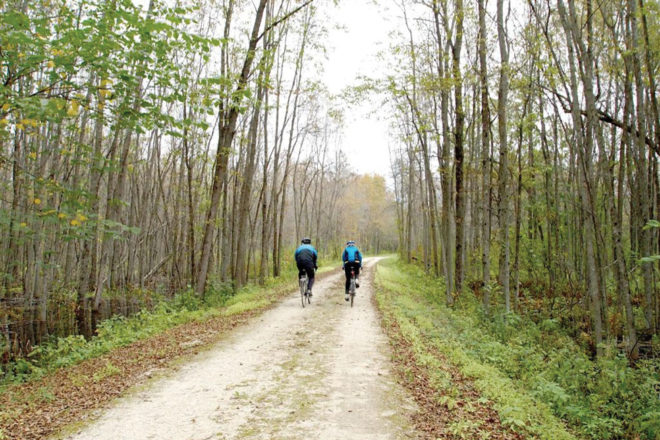 The Ahnapee Trail between Sturgeon Bay and Kewaunee is one of the few cycling designated routes on the peninsula. Egg Harbor hopes to change that with a new trail plan. Photo courtesy of the Friends of Ahnapee State Trail.

The trail is envisioned as an off-road, all-seasons trail approximately three and a half miles long. The idea is for it to be “beach to beach,” with trailheads in Murphy Park in the Town of Egg Harbor and Beach Park in the Village of Egg Harbor, but largely accessible from anywhere in the village. It may include several offshoots with challenging terrain for experienced bikers and potential access to the waterfront on the bay.

UniverCity will be in charge of the bulk of the design, including stakeholder and public engagement, identifying obstacles, soliciting ideas, reviewing easements, studying topography and establishing routes. Collaborating with the UW-Madison engineering program allows master’s students to get real-world experience.

The trail will be a way to expand the silent-sports activities in Door County.

Aside from the Ahnapee Trail from Sturgeon Bay to Kewaunee County and the Sunset Bike Path in Peninsula State Park, there are few cycling-specific paths in Door County.

The trail would cut through four private-property parcels. Heise said most landowners are supportive of or have already committed to having the trail exist on their land, which is critical to making this project happen.

The exception is the Village of Egg Harbor’s component, which would all be on the Alpine Resort property. Ideas for the trail began after it went up for sale in 2018. Any commitment on that parcel would likely not be made until it has a new owner.

The Village is looking to move a wastewater lift station that pumps water to the main treatment plant, which is currently located in the middle of the beach. The Village is also looking at an opportunity to buy a piece of the Alpine property to create more parking, use it as a trailhead and move the lift station there.

It’s likely that any buyer of the Alpine would look to the Village of Egg Harbor to provide financial support for the project, in which case the buyer may want to strike a developer’s agreement. However, the Village is aware of the possibility that new owners may not want to go that route.

“Regardless of if the Village can get their component of this going, I would still highly encourage and will work on this project, even if it’s just on these private properties,” Heise said.

The Village included a question about the creation of the trail as part of its comprehensive plan update, which is in the process of being finalized. Seventy-five percent of respondents said they would support its creation.

“That is the most alignment of all the questions on our stakeholder survey,” Heise said. “It’s pretty significant. It’s something that everyone can get behind.”

The county supports the project and will be including the trail in its Master Parks Plan, said Parks Director Wayne Spritka. It has also agreed to look at opportunities to maintain the trail because of the multi-jurisdictional crossover, depending on how creative the county can get with resources.

An all-seasons trail will be a way to extend educational programs and to spread events throughout the year, including winter silent sports such as skiing, in addition to an already-packed summer schedule.

One connection is the Horseshoe Bay Farms property, which has confirmed its support for the trail. The nonprofit organization in charge of its preservation and restoration, Horseshoe Bay Farms Inc., hopes to promote heritage, innovation and learning and make the property a center for community and education.

The trail may also parallel the Niagara Escarpment in a section that includes caves such Horseshoe Bay Cave, which are used for scientific research. The escarpment provides potential programming opportunities for organizations such as the Greater Escarpment Organization Discovery Center as well.

“What a great opportunity to preserve a large swath of land and promote cultural heritage,” Heise said. “It’s land that would not be developed, so it wouldn’t be sprawled with a number of single-family homes or condos. I really do feel like this is something people can get behind.”

Heise said the trail could be a way to create synergy among their common goals.

“To make something happen could create a model that could then be replicated many times over in our other municipalities,” Heise said, “and eventually find ways to connect them.”

To learn more about more plans for the Village of Egg Harbor, listen to the podcast “The Future of Egg Harbor” with Andrew Kleidon-Linstrom, Myles Dannhausen Jr. and Ryan Heise at doorcountypulse.com/podcasts.