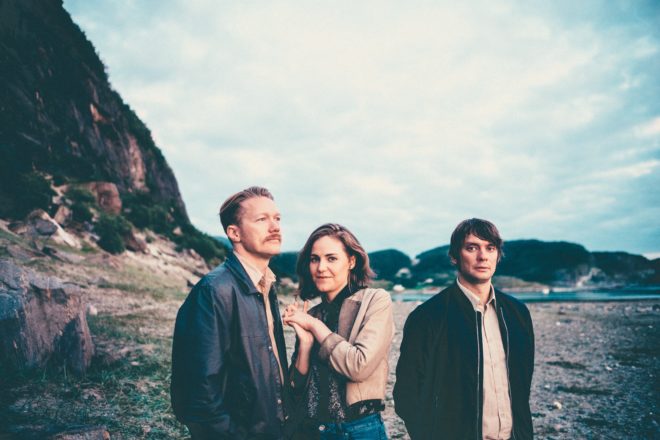 Darling West, a Norwegian Americana group, is headed overseas for their first ever tour in the United States. The husband-and-wife duo, Mari Sandvær Kreken and Tor Egil Kreken, have been making waves in Norway and beyond, earning themselves a Norwegian Grammy Award. They’re headed to Door County Makers Space, so the Pulse caught up with them via email about their tour and recent album.

Darling West came out of experimentation between the two of you working as a duo. What’s it like being able to work together and tour together?

It’s actually a wonderful arrangement for us, though we do get the question a lot about whether it might be a bit too intense. We were apart a lot in the beginning of our relationship due to much travelling with other artists and projects. That also worked, and we have a lot of friends who live like that, so it’s not at all an impossible situation, but for us it changed for the better when we could work and travel together. We’ve never been that good at talking on the phone, and it feels good to have the same passion for one project. And most important of all, we’re better writers when we write together.

You’re on the road a lot. What are the most challenging/rewarding parts?

The obvious reward is, of course, that we get to play music, which for us is the greatest thing in the world and our reason for travelling. But we also feel very fortunate to be able to meet all kinds of people on the road, and experience the community we share with other people who feel the same way about music and art. We also love to see new places and are always eager to find the best coffee shops wherever we go.

The challenging parts must be that it’s hard to be away from friends and family back home. Sometimes you feel like their lives just keep on going in superspeed while you’re gone and yours just stands still, though I bet they feel like it’s the other way around.

What are you looking forward to about your first tour in the States?

The pop culture and music influences in Norway revolve so much around what’s going on in and coming from the States, so for us it’s quite special to finally be able to tour there. It’s been a dream of ours for a long time. We can’t wait to meet the American audience and music lovers, and to drive those long distances listening to music and drinking coffee.

You’ve been to the States a few times before – it seems like people are really enjoying your version of Americana music. How does it feel to have such a positive response?

It’s really a bit surprising and very inspiring. One would maybe think that for a genre like that, which is so connected to a certain country of origin, people would be less open to other versions of it coming from foreign musicians that don’t own it the way they do themselves. But the experience has been the opposite, we’ve felt like our Nordic twist to it has been appreciated and welcomed. That means a lot to us, and inspires further musical creativity, being able to bend and shape our work without worrying about how it’s supposed to sound to fit into this or that mold.

How does your newest album, While I Was Asleep, compare to the others? Are there more thematic elements?

On our first album we had an almost dogmatic attitude about playing live and only with acoustic instruments. We were very inspired by American old-time music, and wanted to try to make our own songs fit into a similar format. On our second album we started doing overdubs with pedal steel and electric guitar, and eventually added bass and sparse drums to some of the tracks. On While I Was Asleep, we took a slightly different approach where we produced the album ourselves, and just decided that anything goes. Whatever we felt the song needed, we would add, without worrying about how to play the songs live. Hence we think we have achieved a bigger and fuller sound, and we also feel we have developed as songwriters.

You added drums to this one – what does that add for you guys?

The first and best thing we can think of is that it adds a wonderful friend who we would hang out with anyway, but who happens to play drums just the way we like it. His name is Thomas Gallatin. He’s done some great work on our last two albums and has helped to shape our live performances, and he’s also just a joy to bring with us on the road. Not a big coffee drinker though.

Adding drums to our live shows has also opened up our ability to play larger stages and that’s something we’ve wanted for this band, to be able to play our songs with different approaches. Both as an acoustic duo or trio, or more as a “rock” band with a bigger sound.

What’s your favorite song on the album to perform?

All these songs still feel fresh and fun to play, but if we have to pick out one in particular that would be the title cut “While I Was Asleep,” at least when we play it with a full band. With its ‘60s psychedelia vibe, it opens up for a rather free approach in a live setting where we can improvise quite a bit and that always turns into a fun experience.

Do you have new projects in the works? Do you write on the road?

We have started writing for our next album, and that is always a very exciting process. Normally we don’t write on the road. We certainly might get ideas that we document to remember them, but we prefer to take a week or two at a time away from everything to focus on songwriting. We are fortunate enough to have access to a family cabin in the mountains, so that’s where we usually go to write.

You sometimes work with other genres of music and with other artists. Could you expand on that?

Actually we have been working together and separately as session musicians for other artists alongside developing our own band. It’s mostly related genres within the pop/rock/folk world, but Tor did indeed play bass in a jazz metal band for a while. We feel it’s been very rewarding and a wonderful learning experience to see how some of our favorite Norwegian songwriters work and think.

Who/what are you currently inspired by?

Since before While I Was Asleep we’ve been listening a lot to bands from the West Coast country rock scene in the ‘70s, like Poco, The Byrds/Flying Burrito Brothers and Jackson Browne, and also Fleetwood Mac and Fairport Convention. It’s sounds that we love and are inspired by. Another big thing for us at the moment are West African blues guitar players like Tinariwen, Bombino and Ali Farka Touré. The new albums by Ry Cooder, Father John Misty, Kacey Musgraves and Dawes are all amazing, and our current favorite car music is Khruangbin.