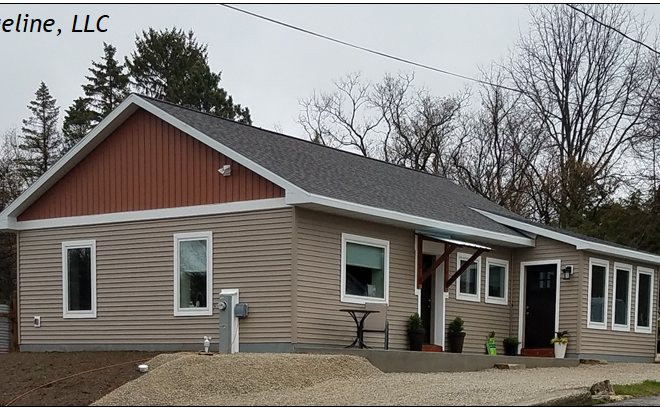 A new option for affordable housing is taking shape in Sturgeon Bay. The Door County Housing Partnership has closed on its first property – located on the former WireTech Fabricators property – where it plans to build a home to sell in the $150,000 range.

Diana Wallace, president of the housing partnership, said the organization is working on the project with builder Rob Vogel and aims to break ground next spring.

But that’s not the only news for the recently formed organization. It has also acquired five lots from the City of Sturgeon Bay on which to build affordable housing. The lots were owned by a Chicago-based LLC that failed to pay taxes on the properties on Cherry Court between Duluth Avenue and Egg Harbor Road. The County of Door foreclosed on the properties earlier this year, then transferred them to the city, which has now agreed to sell them to the partnership for $1 on the condition they are developed for affordable housing.

“The truly remarkable thing is that this has been approved unanimously at every step by the county board and the city, which is great support for affordable housing,” Wallace said.

The Cherry Court properties are zoned for single-family homes or duplexes. Wallace said Habitat for Humanity will develop two of the parcels; the partnership will develop the other three.

Mayor David Ward described it as a complementary approach to the city’s other efforts to support housing initiatives.

“I think this would be a major step forward,” Ward said. “Our housing need is not one-dimensional. There are three or four things we need: market-rate apartments and housing, affordable homes for purchase, affordable apartments, and affordable housing for the 55-plus population.”

Community-development manager Marty Olejniczak, who has been involved in county efforts to support affordable housing for years, is encouraged by the example it could set.

“This isn’t going to solve all the world’s problems, but it’s a good start,” he said.

Wallace said the partnership hopes to break ground on the Cherry Court lots next year and have them completed by early 2021.

The housing partnership – more than a decade in the making – is modeled after what is often called a community land trust. The partnership ensures the long-term affordability of the housing inventory that it acquires or establishes, restricting the housing to local workforce households and controlling the price of the home now and during future sales.

The trust sets formulas that regulate the maximum price for which the home can be sold or resold through ground leases, in which the trust owns and then leases the land to the people buying/building homes on that land. This structure allows the homeowner the rights of conventional homeownership, except that the use and resale of the homes must conform to the trust’s restrictions. A “resale formula” is set so the owners will earn a profit on the sale, but the housing will remain affordable for the next qualifying buyer.

The partnership will work with Vogel to find potential buyers who meet its criteria: They must be year-round residents of the county, qualify for a commercial mortgage, be employed 700 hours or more per year, and live in the home. The buyer may not own other homes or land.

“When the new owner is ready to sell down the road, the partnership steps back in to help find a qualified buyer,” Wallace said.

In working with Vogel, the partnership has chosen a builder who sees affordable housing in a holistic manner. Vogel aims to build a home that fits his concept of the Anywhere Farm, similar to the home he built on the city’s east side last year, which sold for $148,000.

That home is 1,100 square feet – much smaller than the national median square footage of 2,436 for a new single-family home. It’s built with thick concrete walls coated in polystyrene, which reduces heat loss. By building smaller, Vogel reduces both up-front building costs and long-term heating and cooling expenses, but he has an eye on much more than construction costs: He’s focused on how people actually live in his homes long term and what it costs for them to do so.

“I think every structure should have a sticker on it that shows how much it will cost to heat it and cool it,” he said. “When we build, performance tends to get ignored.”

Vogel began his career in concrete and has spent a lot of time working on elaborate, 10,000-square-foot homes. But after working with Habitat for Humanity, he started thinking differently about home-building.

“I got to meet so many people who are struggling to get ahead,” he said. “I don’t need to be greedy. I can work on 10,000-square-foot homes, or I can build something for people who need it.”

He started thinking about size, utilities and necessities. And he thought about the ways people lived in the past – the homesteaders who chose a home by how they could farm and grow around it.

“People homesteaded out of necessity,” he said. “We’re going to have to get back to that if a lot of people are going to be able to really afford a home.”

That led him to the concept of what he calls the Anywhere Farm. He builds the home with a small greenhouse as part of the structure so people can grow their own food right in their home. Vogel said, “That’s part of affordability: for a small family to be able to grow a portion of [its] own food, and save several hundred dollars a year, and eat [healthfully] – that’s a part of the picture.”

Vogel is excited by the opportunity to work with the housing partnership and sees opportunities to build clusters of affordable homes in other parts of the county. Only Sturgeon Bay and Sister Bay offer municipal sewer and water, which makes building affordable homes much easier, but Vogel said by building clusters with a shared well and septic, it could be possible to achieve similar price points in rural townships.

He’s also interested in working with people in an advisory role, teaching them how to build their home so they could finish aspects on their own, putting sweat equity into the building. There’s a niche in the affordable marketplace, he said, and though the money may not be as rich as the McMansions going up on the county’s shorelines, there’s other profit to consider.

“I have a lot of options in building,” he said. “I got to thinking, what is the work I can do that is going to matter?”