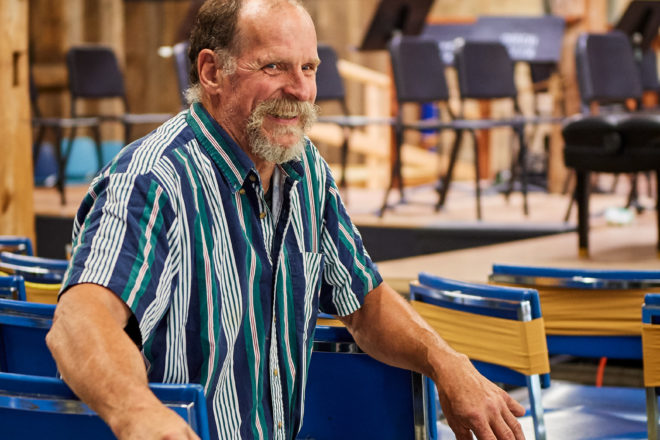 Peter Nehlsen is excited to share his unique piano with the world. Photo by Len Villano.

Back on his family’s farm in southern Wisconsin during his freshman year of college, Peter Nehlsen had been milking a cow when a cat ran underneath and spooked the cow. The cow kicked him in the jaw, and that’s when he knew he wouldn’t be able to have a career playing trombone.

At the time, he was back home from studying trombone at DePaul University in Chicago. The plastic surgeon who examined Nehlsen’s jaw said the good news was that he would be able to play trombone again in three or four years.

“To a college student, four years is like the end of the world,” Nehlsen said.

Luckily, he had also been working on pianos at DePaul and decided he could stay in its music department doing that.

Now Nehlsen has built an 1,800-pound Omega double-keyboard piano from scratch, putting in more than 2,000 hours during the course of a single year. It was something he’d had in his “notes to self” since the early ’80s.

“I can do anything that you can do to a piano,” Nehlsen said with a laugh. “I’ve really done it. It’s not stretching the truth a whole lot to say [that] everything I’ve done on this project, I’ve done to some other piano. This is just the first time I’ve done it all from scratch.”

The culture shock that resulted from Nehlsen growing up on a farm and then moving to downtown Chicago had a lot to do with no longer having anything to do with his hands: no projects to work on, no tools to work with, Nehlsen said. But he was able to fill that innate need with piano work.

“It’s like working with tinker toys,” he said. “It’s a hands-on, mechanical thing — mechanical to me, in the perfectly beautiful sense in which this technology hasn’t changed since the 1800s.”

After his apprenticeships, Steinway & Sons hired Nehlsen for concert work. In that position, he tuned pianos for almost anyone who arrived in Chicago to play and became the company’s premier piano tuner. Though he was backstage, it put him right in the center of the city’s music scene.

Nehlsen began teaching piano work at the American Conservatory of Music (ACM) when it was located on Michigan Avenue, one of Chicago’s most prominent streets. The conservatory had a fleet of variously engineered pianos, and he kept notes on what he liked about how they were styled and crafted. That’s where the seeds were planted to build an instrument from scratch.

Nehlsen was introduced to the early French double pianos and knew he’d want to build something with similar grandeur, but the project still remained on his bucket list as a goal for the future.

When Nehlsen and his wife moved to Washington Island, where she had grown up, he continued to commute to Chicago every few weeks to continue teaching at ACM. They moved up in May 1985, thinking they’d be there just for the summer. They never left.

During the next four years, Nehlsen began building his own piano-work practice in Door County while commuting to Chicago and eventually created a big enough client base to be able to leave his ACM teaching position entirely.

In the fall of 2014, Nehlsen embarked on his masterpiece. He had the case built that year, but he kept pushing the project aside to work on other things — including his work as Washington Island’s fire chief — until he started making real progress in the fall of 2017.

“I just decided that it was time to devote what I could devote to it,” Nehlsen said. “And I did. I basically pulled it off that winter. I did nothing else but work on this.”

So really, he built the piano in one year. He bought the keys because they were too laborious to cut out himself, he said, and he also had the strings wound and the hammers pressed by someone else.

Otherwise, the piano is made from scratch. He had the plywood for the case custom-made in Marion, Wisconsin, and the soundboard custom-made from slow-grow spruce in Canada.

“The place to get that spruce is north of the Arctic circle, and Canada has an almost unlimited supply of that stuff yet,” Nehlsen said. “The Alaskan supply has fed the American piano industry for 150 years, and that’s starting to get a little picked over.”

He sourced the rest of the wood on Washington Island and ran it through his own saw mill.

The piano made its debut in October 2018 when Nehlsen took it to a jazz concert on Washington Island, and then it was featured during a winter Peninsula Music Festival performance. In July 2019, the piano was featured in Symphony Academy performances at Birch Creek Music Performance Center, backed by an 85-piece orchestra.

Jodie DeSalvo, who has spent more than 20 years as a Birch Creek faculty member; and Jeannie Yu, a performing artist for Midsummer’s Music, delivered stunning performances of Concerto for Two Pianos and Orchestra in D minor by Francis Poulenc. The two pianists had met only a few days prior.

The performance, led by conductor Brian Groner, was laden with trills, speed and dramatic changes in tone — by turns violent, gentle and playful. The three-movement concerto runs about 20 minutes, and DeSalvo played it all from memory.

Groner told the tale of a famous French aristocrat who had a double-keyboard piano in her home in Paris, and the famous French composers who attended soirées at her house performed on it. One of them was Poulenc, the composer of the concerto chosen for the Birch Creek performances.

The French-engineered, double-keyboard pianos of the 1800s were largely bombed out of existence during WWII, Nehlsen said. He guessed there are about 20 left today.

Nehlsen’s piano has everything built into it that comes from 1900s American piano engineering.

“It’s all about more beef, more tension and more power,” Nehlsen said. “None of those French ones can keep up with this. I know that, in terms of sheer power.”

A special stage had to be built at Birch Creek to accommodate the piano’s large size, but even so, Nehlsen was able to move it with a friend. They did it once just to say they could.

“Two of us moved it, but my friend is a trained gorilla,” Nehlsen said, laughing. “He’s a mountain.”