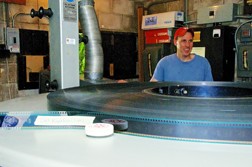 Dale Jacobson, co-owner of the Skyway Drive-In in Fish Creek, says that people don’t come to the outdoor theater for the picture quality they come for the atmosphere and the nostalgic experience. Photo by Len Villano.

The Skyway Drive-In Theatre in Fish Creek is a picture of the 1950s, inside and out. The playground keeps the attention of squirming kids, old box speakers line the lot and the original carbon-powered lamp house still sits next to the bulb-powered one that replaced it to project the films.

Dale Jacobson, co-owner of the theater, wants to keep the drive-in a picture of the past, but he knows he’ll soon be forced to update the projection system. Movie studios are switching to digital technology and in the coming years will stop producing movies on 35 mm film.

Film reels are expensive to make and heavy, which ups the price of shipping. Movies for digital projection systems are loaded onto a hard drive, much cheaper and easier to ship and create.

Lee Burgess, owner of Highway 18 Outdoor Theatre in Jefferson, said it costs studios anywhere from $800 to $1,500 to make a film, but only $50 to make a digital copy.

The savings in production and shipping, however, doesn’t translate to theater owners who purchase the movies – their costs remain the same for film or digital copies. 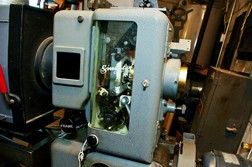 The Simplex X-L projector currently in use at the Skyway Drive-In in Fish Creek. Photo by Len Villano.

Theater owners also bear the cost of converting their projection systems. Burgess switched to digital projection in 2011, and the projector and server cost him $75,000 – a lot of popcorn.

“I became convinced [digital conversion] was happening, so I decided to get out in front of it and convert a little early for drive-ins,” Burgess said. “The bottom line is that film is going away probably at the end of next year.”

Digital systems are finickier than their film counterparts because they need to be in a clean, climate-controlled room. Jacobson said he’ll have to update the projection room – now filled with original 1950s equipment, rolls of film and broken speakers – to accommodate.

“You can basically understand how motion picture film gets projected,” Vogel said. “[Digital projection] is a more complicated thing. It’s an expensive projector and it has to be kept in an environment that’s constant.”

Burgess said the movie studios offer rebates to bigger theaters if they convert to digital projection, but as a small outdoor theater, he can’t get in on the game.

“I am paying for the whole thing myself, and I’m getting no help from the studios – that’s just the way it is,” Burgess said. “The little guy is getting screwed on this one.”

Once big conglomerate theater companies, like AMC, convert to digital, it will be easier for studios to quit making film.

It’s not all bad news, though. Vogel said the initial image of film projection is better than a digital one, but after a few runs the film starts to wear down and the quality drops. Burgess disagreed and prefers the look of digital projection every time. Either way, digital movies can be run hundreds or thousands of times and still look good.

Despite a more consistent visual, Burgess and Jacobson said customers don’t go to drive-in theaters for the picture quality. It’s the atmosphere and experience that brings them in.

“People talk about how they haven’t been to a drive-in since they were kids,” Jacobson said.

Soon, getting a chance to catch a drive-in flick might become a rarity. There are currently nine drive-in theaters in Wisconsin, and 366 in the country, according to the UDITOA.

“I would predict in the next five years about half the drive-ins are going out of business,” said Burgess, who is afraid that if enough drive-ins close, people will forget about them. He believes there is a threshold, and if the number of outdoor theaters falls below it, his business will suffer.

“There really needs to be a critical number of drive-ins so people know they exist,” Burgess said.