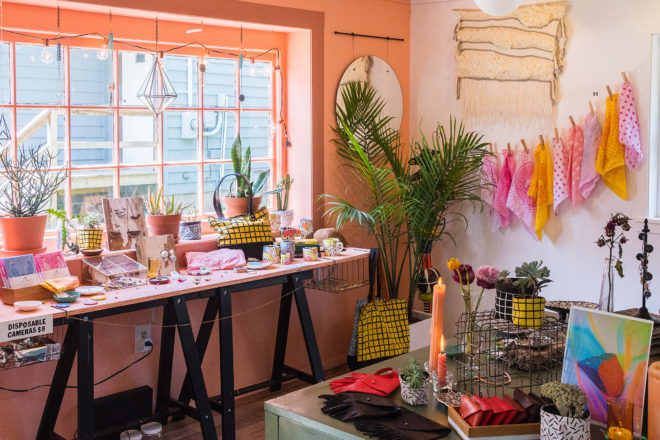 A display of featured artwork under front window. Photo by Len Villano.

Walking into The Lightbox is like stepping right into a bubble of sunshine and color. It’s also like walking into the mind of soon-to-be 24-year-old Lucy Hodkiewicz, the owner of the new art shop and printmaking studio in the Shorewood Village of Ephraim.

Hodkiewicz is pretty much identical to her shop – sunny and warm and super cute.

The shop, officially open since May 29, is full of handmade artwork and textiles, antiques, books and plants. The artwork includes anything from pottery and jewelry to prints and bandanas, and not all made by Hodkiewicz. She’s made a conscious effort to show off the talents of other artists.

So, where did her story even start? In Green Bay, where she’s from. Hodkiewicz was always the “art kid.” When the time came, she headed to the University of Wisconsin-Madison to pursue an art degree. She tried all kinds, from pottery to woodshop, but screen printing proved to be her favorite. She graduated in December of the 2016-2017 school year, and since then has spent her time back on the peninsula where she’s spent many summers. 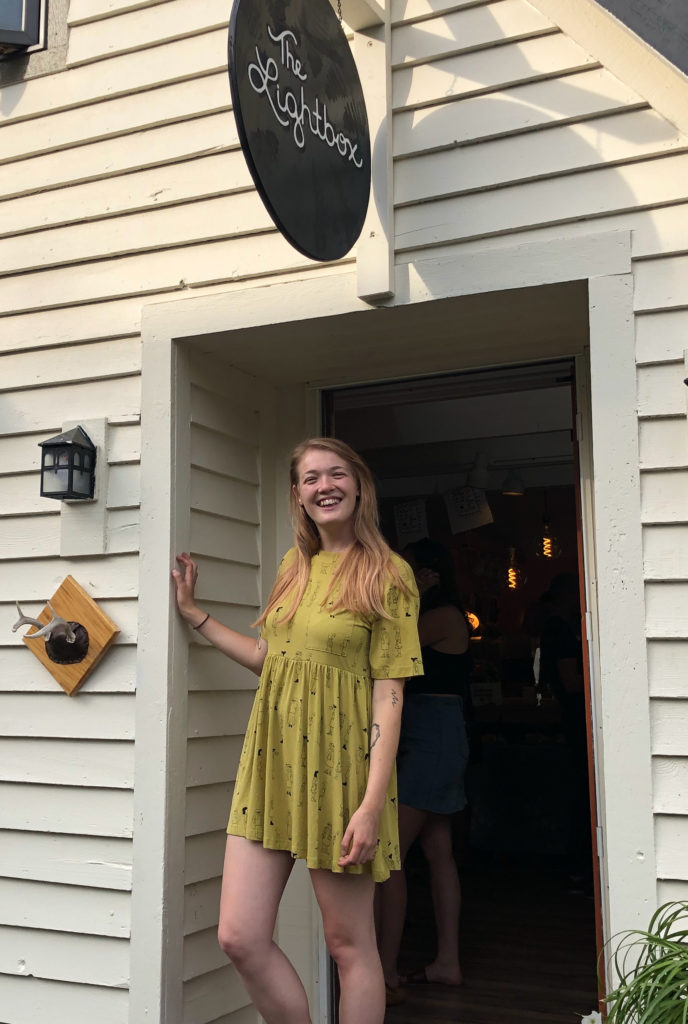 She didn’t have a set plan after graduating (though it was looking like wedding photography) and opening a business was never part of it, she said. She was watching a house-flipping show on HGTV one day, and joked with her mom about how cool it would be to “flip an old, ugly house.”

It was then that she began to seriously think about finding a place. Her mom hopped on Craigslist and they found an affordable one listed just that day. All of a sudden she had a shop in Ephraim and a mortgage to go with it.

“It doesn’t hurt to put your money towards something that will gain value, and I think Ephraim is … becoming a ‘spot,’” Hodkiewicz said.

That winter, she began gutting the place to fix it up. She couldn’t live in the shop due to lack of insulation, so instead she stayed at a little cabin in Northport and spent the winter feeding logs into a wood stove to keep warm. It was long and lonely for her, she said, and she racked up hours working on the shop in the cold.

Her family has been very supportive of her endeavor and have helped a lot with the handiwork. She didn’t have to pay any labor on the building, she said. Her friends have been helpful, too. They’ve all donated items and often stop by the shop now to hang out and bring her food.

Already, she’s been getting lots of customers at the shop, whether it be friends or people from the community that have specifically sought her out. Connecting with the community is something Hodkiewicz is sure to be good at, too. She’s an extrovert, she said, plus being a bartender at Trixie’s has made her that much more personable.

She hopes to work with the community not only through interacting with customers, but also through hosting screen printing workshops. She’s already done two with a group of high school kids and a family. She’s open to having other artists lead classes too, for things like embroidery or sewing.

Including other artists is crucial for this project. She said she realized she couldn’t create all of the art on her own, plus showing off other talents is important to her. Currently, a great set of female artists are featured at the shop:  Ashley Cramer, Selia Salzsieder, Diana Morgan, Jewel Millard, Sage Conrad, Sarah Boge, Abbey Boge, Rachel Schneider and Jennifer Dahl.

“I wanted to support them and show the world their talent, and also show them their worth,” Hodkiewicz said.

Though it’s fun to say she’s featuring only female artists right now, she said, she doesn’t plan on keeping it that way. She has male artists in mind too for future collabs.

So now Hodkiewicz has flipped a shop, turned it into her art studio and is already having a busy start to her summer. It’s safe to say she’s doing quite well as business owner. For her, it’s an awesome feeling to have accomplished this project at a young age.

Ultimately, to be in Door County specifically is even more special. As a place where people work really hard for their trade and where the arts are highly supported, it’s awesome for her to be a part of it, she said.

What’s next? She’s hasn’t done a lot of her own printing yet, so that’s first on her list aside from continuing to connect with other artists. When prompted about long-term goals, she found it harder to put into words since it’s still a day-by-day operation.

“I hope it organically grows into a thing that contributes positively to people’s days,” Hodkiewicz said. “I want to see gatherings of good people flexing creative muscles.”

Say hi to Hodkiewicz and check out the art at The Lightbox, 9922 Water Street, Ephraim. Hours are 10 am to 3 pm, Thursday through Sunday.