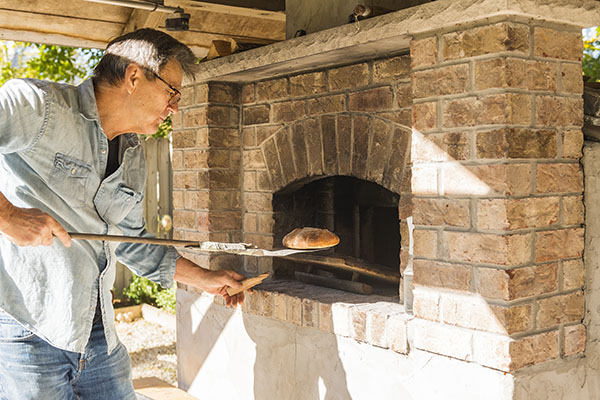 Potter Larry “Thor” Thoreson pulls a fresh loaf of artisan bread from the brick oven he built behind his Ellison Bay studio ten years ago. Photo by Len Villano.

Larry “Thor” Thoreson, has a unique way of cooking things up in Ellison Bay. While he and his wife, Judy, have devoted 39 years to Gills Rock Pottery, Thor has spent the better part of the last decade learning a different set of skills — cooking in a wood-fired brick oven.

Since 1989, the Thoresons’ home, studio and gallery have sat in Ellison Bay. In their backyard, Thor is found cooking chicken or slow-roasting vegetables and pork shoulder in his wood-fired brick oven. During the Ellison Bay Fall Art Crawl, he cooks up turkey sandwiches on homemade bread for attendees.

“The oven is very much like a ceramic kiln,” Thoreson said. “Many think I just have a backyard kiln because I am a potter. It has nothing to do with pots. It’s all about food.”

Cooking in a wood-fired brick oven can be a complex process.

Thoreson recalls cooking pizza on his charcoal grill while lining it with brick to get an even heat, simulating the effect of a true wood-fired brick oven. This sparked his determination to have an outdoor brick oven of his own.

“A mutual friend knew a guy who built his own oven out in Iowa,” Thoreson said. “He said, ‘If you go to build one, build a bigger one.’ I took that under advisement and I started reading about wood-fired brick ovens. It’s basically a big brick envelope that you build a fire in and store the heat in the brick. You use the residual heat to cook.”

It was a two-year project for Thoreson, who opted to build a French design from plans he found in a book. In the first year he built the structure around the oven, including the cement slab and roof to allow for cooking in the rain. He built the oven in the second year. 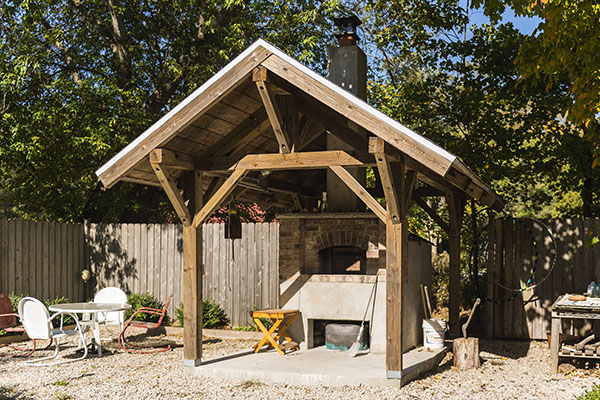 “I have a wonderful neighbor, Steve Shumway, who is an incredible mason,” Thoreson said. “We built it in about two weeks. Then it was a matter of letting the masonry dry out and cure it with small fires.”

The oven consists of fire brick, a dense, high temperature brick that stores heat. Building the oven was a project, while cooking in it is an art form.

“I had to learn the whole craft,” Thoreson said. “It involved a lot of trial and error. I was teaching myself the craft of breadmaking. I knew which way to go and what kind of bread I was interested in making.”

“No two times are ever exactly the same,” he said. “That’s one thing I really like about it. It’s very intuitive and interactive. It’s much like firing a kiln.”

He says there are two primary ways he uses it to cook, the first being the way you would bake bread.

Using an infrared thermometer or by feeling the heat by hand through 14 inches of the oven wall, Thoreson is able to make a beautiful crusty loaf of artisan bread in a matter of 35 to 40 minutes. 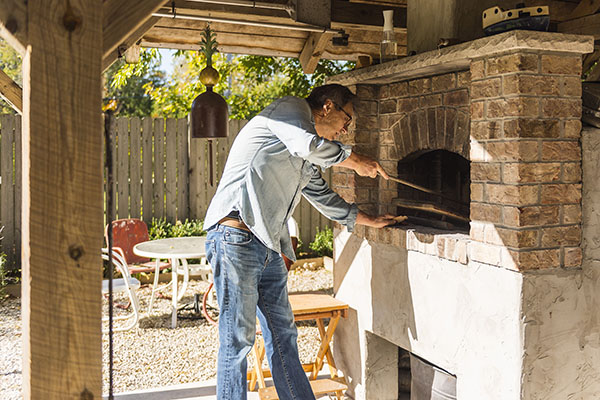 Potter Larry “Thor” Thoreson pulls a fresh loaf of artisan bread from the brick oven he built behind his Ellison Bay studio ten years ago. Photo by Len Villano.

“The second way is as you see in a pizza place,” Thoreson said. “You build a live fire, leave the fire and bank it to the rear of the oven. The internal temperature is around 700 – 750 degrees. You can go from uncooked to cooked in three to four minutes. It’s fun because it is so immediate and offers instant gratification.”

In the fall during the Ellison Bay Art Crawl, Thoreson’s turkey sandwich tradition reminds him of his childhood hometown in Iowa.

“I grew up on a turkey farm in Iowa,” he said. “There was something called ‘Turkey Day.’ They would sell turkey sandwiches on the corner. I do my version of that here. I bake about 20 loaves of bread and roast three turkeys in the oven. That’s my little homage to my hometown.” 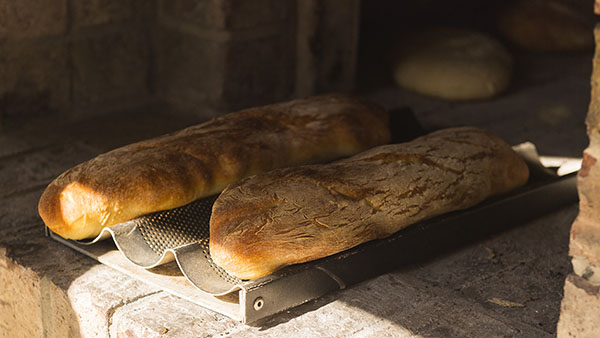 Using an infrared thermometer or by feeling the heat by hand through 14 inches of the oven wall, Thoreson is able to make a beautiful crusty loaf of artisan bread in a matter of 35 to 40 minutes. Photo by Len Villano.