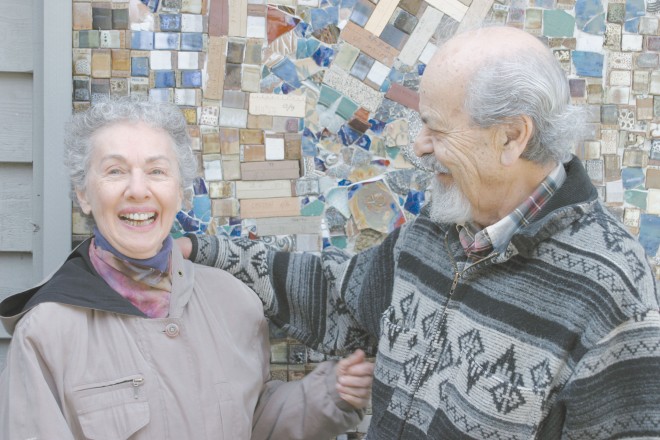 Abe and Ginka Cohn, the originators of the Door County Pottery scene. Photo by Dan Eggert.

Ask anyone who’s been to a pottery studio in Door County and they will probably tell you two things about their experience.

First, they’ll tell you that making pottery is more complicated than one might think. It requires dexterity, skill, and an intimate knowledge of clay and glaze combinations, firing techniques, science and art.

The second thing they’ll tell you is that pottery is beautiful. In looking at the objects, the inherent balance between opposites emerges: expression is combined with function, tradition meets imagination, and artistic flair is tempered by patience for the medium.

What they may not tell you, unless they’ve taken a tour of the many galleries in the county, is that the potters of the peninsula are a dedicated, humble, and fascinating bunch. Like many places where a cluster of artists has gathered, the group shares a certain camaraderie — in this case a camaraderie defined by the common appreciation for diversity. Not only do the potters themselves come from far and wide, but their training also draws on influences from the world over – from the southwestern United States, and parts of the Midwest and Canada, to Europe and Asia. The Door County potters are a microcosm, of sorts, representing and celebrating the broader world of pottery.

The Tradition of Pottery in Door County

By all accounts the tradition of pottery in Door County begins with Abe and Ginka Cohn. Abe and Ginka arrived in Door County in 1956 and rented a place in the heart of Fish Creek where Abe began giving demonstrations of “throwing pots,” or using a slowly spinning horizontal wheel to form lumps of clay into smooth, rounded shapes. In 1957, the Cohns purchased their current gallery and studio, The Potter’s Wheel, also in Fish Creek. The Potter’s Wheel quickly became a nexus for the county’s pottery and is where the first spark of interest ignited for many of today’s established potters.

Mentioning Abe among potters elicits immediate gestures of reverence as they offer enthusiastic testimonials to the positive example he has set. Potter Prisca Benson says, “He’s highly respected both as a potter and as a person who has brought the other potters together.”

Brian Fitzgerald of Sister Bay Pottery seconds the sentiment by saying, “At 11 years of age I was enraptured watching Abe on demo day at the Potter’s Wheel studio. Now that I’m older I can see that I was able to start up here because other potters like Abe paved the way.”

Abe’s pottery, like all of the pottery in Door County, is very individual. He has built a reputation for his glazes, but of his own work says, “There is variety in what I do. Function is a basic concept, but I enjoy the pure fun of decorating.”

Ginka also adds, “The surface images on Abe’s pottery are full of abstracted images, which is part of what makes the pottery uniquely his.”

Also among the canon of potters who have lived on the peninsula for two or more decades are David and Jeanne Aurelius of Clay Bay Pottery, John Dietrich of Ellison Bay Pottery, and Larry and Judy Thoreson of Gills Rock Stoneware. This group, together with Abe, laid out the theme of variety in Door County pottery.

David and Jeanne Aurelius, who moved to Door County in 1976 after studying at Luther College in Decorah, Iowa and spending five summers with world-renowned potter Marguerite Wildenhain, represent one way in which pottery styles vary from gallery to gallery. Their pottery, perhaps more so than that of other potters in the area, reflects the environment of Door County itself. Landscapes, water scenes, floral motifs, woodland scenes, birds, and sky often adorn their pieces, and the blues, greens, grays, and browns of the natural setting are consistent throughout. David Aurelius further explains that they gravitate toward classical forms “from training in part, but also due to [his] own sense of style.” The pottery forms are “blown out from the inside,” says David, while Jeanne notes, “Our pottery is influenced by nature and the things around us – the things in our hearts and minds.”

By contrast, John Dietrich’s work could be considered less traditional than others. He uses a “more painterly approach,” with “a warm palette of colors, colored clay slips, and abstract forms.”

Prisca Benson, also a Luther College graduate who opened a studio in Door County more recently, brings yet another style to the table. Prisca spent a year apprenticing in Japan and later spent two years apprenticing with Mark Skudlarek, a potter in the Madison area. With a quick glance around her studio, it’s easy to see that her pottery is a hybrid of both Asian and traditional European and American influences.

In 1976 several potters formed the Potters Guild, at that time a group of five studios organized for the purpose of exchanging information, ordering supplies and advertising together, establishing pottery as an important part of the arts community, and, most importantly, getting to know one another. Currently, the Potters Guild has eight members (The Potter’s Wheel, Stoneware by Prisca, Sister Bay Pottery, Clay Bay Pottery, Ellison Bay Pottery, Gills Rock Stoneware, and new members TR Pottery and Zachariasen Studio).

Prisca, the current president of the Potters Guild, remarks, “The Potters Guild is great for everyone – it’s a place to share ideas and help solve problems you run into with the art. Potters are not at all secretive about techniques. They’re very helpful.”

Although there are many other potters in the county, some with studios and some that work and sell independently, it seems that the Potters Guild is a significant mainstay of this particular art. In one regard, the mere existence of the guild establishes Door County as a home for potters. It is home that does not necessarily seek to pigeon-hole the potters as craftsmen and women of a particular breed, but rather appreciates the many influences and styles in the area as a homage to the art itself.

The Art of Pottery

As for the production of pottery, the word “variables” describes it all. Of first concern is the clay. Generally, clay falls into one of three categories based on its compositional qualities: earthenware clays, stoneware clays, and porcelain clays. Earthenware clays, which are eventually fired at the lowest temperature on the spectrum, are somewhat porous and usually red or orange in color. Stoneware clays are somewhat darker and coarser, while porcelain clays are very smooth, often white, and are fired at the hottest temperatures (up to 2400 degrees Fahrenheit, give or take). The clay a potter uses depends on the desired look and feel of the pottery. In days past, the clay choice depended mainly on the natural clay deposits of the region. Ironically, Door County has virtually no usable clay deposits – unless, as Abe jokes, “you want to make limestone bricks.”

The next step in the process is the formation of the clay to create, in potter lexicon, “clay bodies” or, more simply, “pots.” The clay bodies, which are lumps of clay fashioned into anything from mugs and plates to large jugs, are the first point of artistic expression for the potter. Tony Gebauer of TR Pottery in Fish Creek explains that pots can be “thrown, pinched into shape, rolled into a coil like a rope and wound around itself, rolled into large slabs…there are lots of ways to make pots.”

Independent of the clay formation is an equally important element of the process: glaze mixture. Glazes are made with a combination of minerals, including a glass former, like sand; oxides and other minerals to act as a “flexing agent”; minerals, like alumina, to control the glaze during melting; and coloring agents, with minerals like iron and cobalt. Tony says, “You put the minerals together, just like a cake recipe, add water, and mix.” Again, the artist’s vision matters greatly; the number of colors and finishes are infinitesimal.

Next is the first of two or more firings, called “bisque firing.” Bisque firing makes the clay stronger, burns out the impurities, and releases vapor gas from the object. When the object has cooled, the glaze is applied and the second “glaze firing” takes place — this time at a higher temperature (upwards of 900 degrees Fahrenheit). The water in the glaze mix evaporates, leaving behind the minerals that color and seal the object.

The firing stage, too, is an important window of time for the potter to express his or her artistry. During the firing, the potter can control the oxidation (which means letting air into the kiln, often resulting in brighter colors) and reduction (which means closing air off from the kiln, often resulting in darkened clay bodies). Firing temperature and duration have a large effect on the final product, but the type of kiln can also make a difference. Most potters use gas or electric kilns, but others, like John Dietrich, “pit fire,” which is a more primitive method.

Fish Creek is also home to a recently constructed wood fire kiln. In the wood kiln, which is owned by avocational potter Tad Gilster who fires with fellow potters Tony Gebauer, Rich Higdon, and Brian Fitzgerald, ash adheres to the surface of the pots creating unpredictable patterns and effects.

Still another form of firing is Raku, something Brian Fitzgerald spends a lot of time with. “Raku,” he says, “is a Japanese-style firing with an American twist. It’s named for a Japanese family, but the technique was actually introduced by Paul Soldner in the 60s.” When the pots are lifted out of the kiln, they are immediately placed in a canister or container with combustibles. As the combustibles burn, they leave a random pattern of “flashes on the surface” and sometimes leave “a primitive look with crackle glazes.”

Creating pottery clearly requires the precision that comes in the hours spent mixing, shaping, selecting, firing, and calculating, but an element of unpredictability always remains. The unpredictability comes when the unfinished pieces are placed in the kiln that will then render them products of the countless reactions between the clay, glaze, and firing methods. Among potters, however, one finds a respectful and happy surrender to this unpredictability. Brian Fitzgerald, for example, says, “I feel like a kid on Christmas morning when I lift the lid off of the kiln. I enjoy the surprise.”

Finally, the finished object is in someone’s hands. The weight, texture, color, and shape are all extensions of the artist’s eye. Some pieces, notes Prisca, “enter someone’s home and become a part of it and part of their daily rituals.” Others pieces make their way to a serene shelf where they will be marveled at, perhaps eventually to be absorbed into the region’s historical record. All of them will be appreciated for their individual qualities, much like the potters themselves.

When asked why the peninsula has been a gathering place for potters, most potters take a moment to respond. The answers range from an appreciation of Door County as a place where art can be a lifestyle, to this group of potters’ distinct spirit of diversity, to the warm reception the community has given them. Whatever the reason, the potters of Door County have made an indelible mark on the arts community and are well worth a visit.