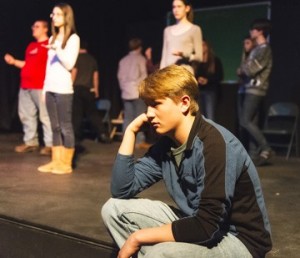 “Do you remember the Columbine shootings?” Director Robert Boles asked 11 Door County high school students gathered for their first rehearsal of columbinus – a play that examines the day in the life of archetypal high school students and what happened on April 20, 1999, when two students opened fire in Columbine High School.

The students shook their heads – some hadn’t even been born yet.

“I told them,” recalls Boles, “‘When I was your age, I couldn’t count on my hand the number of school shootings.’ Then I asked them, ‘How many can you think of?’ And they started rattling off shootings. It is a part of their growing up.”

The anxieties and pressures presented by each archetype – Freak, Perfect, Jock, Prep, Faith, Loner, AP and Rebel – are also a part of the student’s reality.

“More than half of the play is not about Columbine at all. It’s about a typical day in the life of eight high school students. We see how they are treated on a day-to-day basis in class and we hear what is going on in their heads,” explains Boles. “All the dialogue is taken from interviews with high school students all over the country. Nothing is invented. The only thing invented is the structure.”

When asked if they could relate to the characters they were playing, the cast responded with a resounding, “Yes!” 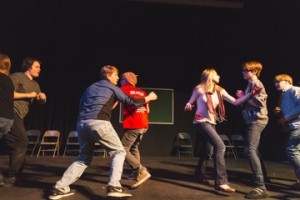 ‘columbinus’ takes audience members through a day in the life of eight archetype high school students. Photo by Len Villano.

By the end of the first act, the audience has met each character, witnessed what they experience daily. “Then these two emerge and become the Columbine killers,” says Boles, “but there is nothing unusual about them, any more so than anyone else.”

“You look at people and wonder, ‘Is that going to be them if [a school shooting] happened?’” says Hadley Takashi, who plays Perfect.

“The thing about Door County is it’s a wonderful place, but this type of tragedy happens anywhere, you have no idea of predicting where it will happen,” says Isaiah Spetz, who plays Freak.

“It shows that you don’t know what other people are going through,” adds Michaela Kraft, who plays Faith.

The second act “is all about Columbine,” says Boles, “from eye-witness accounts, video and audio from the day, psychologist transcripts, 911 transcripts.”

“To play the shooters feels scary at times,” admits DiCarlo. “Some of the stuff we are saying is really out there, like I never heard anyone talking like this or feeling these things but in some ways I can see where they are coming from.” 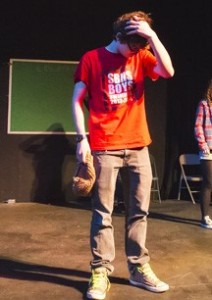 “I saw their [Dylan Klebold and Eric Harris] home videos and some parts of it look so normal, they are just normal kids,” adds DiCarlo. “But then other parts I could see it actually come out, like they scream into the camera, ‘I’m gonna rip off your head and shove it so far up your a** you’ll be coughing dandruff for a year.’”

“It’s like a movie where you wonder, ‘How did the writer come up with this crazy stuff?’” says Samantha Spohn, who plays Rebel.

“We picture ourselves in Tarantino films,” laughs Jacob Barbercheck, who plays AP.

But the “stuff” is real and happening every day.

“The play presents whatever anxieties or stresses or angers they are going through,” says Boles. “The Columbine stuff really becomes the worst-case scenario if we allow all of this behavior to continue, then this is what could happen…and did.”

“It’s a very powerful play, very important for a lot of kids around this area to see because bullying is a huge problem in our county,” says Josh Augustson, who plays Jock.

Many of the students participating in the play have experienced or witnessed various forms of bullying, primarily cyber-bullying. “We had a huge fiasco with a Facebook page that happened at our school not long ago,” says Augustson.

“Each generation has its own pressures and its own thing. You have to stop and listen,” says Boles, who directed the play once before at the University of New Haven in Connecticut. “The first time I did this I was the wise professor and director and I learned very quickly they knew more about this than I did.”

“It’s what they are going through every day,” adds Educational Director Ryan Patrick Shaw, who acts as stage manager for this production.

The play also employs language the students hear regularly – a lot of swear words. “The language is tough,” admits Boles. “I talk to the kids and remind them why we are doing this. We’re not just trying to shock people with a bunch of four-letter words. We’re telling a story, your story.”

“If you took the show and rewrote it [without the swear words], it wouldn’t be the same,” says Spetz.

“The show is not meant to hold back punches,” adds Barbercheck.

“It’s not exploitive,” says Boles. “It’s raw. It’s a powerful piece of theater. The goal is that we are doing something relevant and in a way needed to just get it out there and show this is what’s going on and this is what’s happening. And what are we doing about it?” 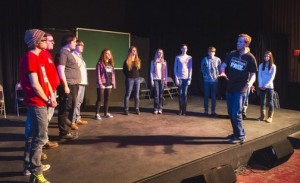