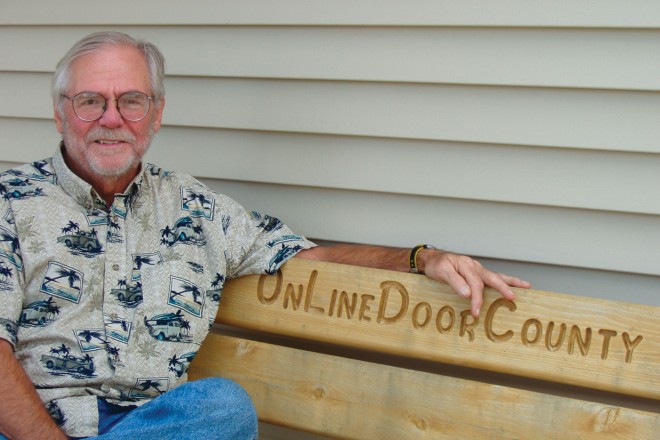 As the “wizard” behind Door County Computer (affectionately known as “Ricknet”), Rick Gordon will most likely never be able to retire. If he continues to follow his natural tendencies, he’ll simply allow himself to intuitively gravitate toward whatever attracts and keeps his interest. Gordon admits he doesn’t function well if he does the same thing year after year. Fortunately, technology is changing rapidly.

When Gordon was a child in the 1940s, he remembers being able to sled down one of Fish Creek’s hills, and if the snow conditions were right, right across Highway 42 and into what is no longer an open field. “There were never any cars coming. Back then, Door County was pretty bleak during the winter. .. but when you’re a kid, you don’t mind.” Gordon recalls that he and his friends didn’t have much in the way of toys, so they made their own. Drawn to blasting sites, the young boys would gather bits of wire from the debris, and if they were lucky, they might even find blasting caps. Gordon’s fascination with electricity began early – as early as the age of five – when he says he experimented with sticking all sorts of things into the electrical outlets throughout his childhood home, much to the dismay of his mother.

During his childhood, Gordon’s family (descendents of Door County’s first settler, Increase Claflin) moved from Door County to the Waukesha area, and relocated throughout the Milwaukee area several times during his adolescence. After leaving home, Gordon served four years in the U.S. Air Force specializing in aircraft communications, worked for an electronics repair shop, took a job at Delco building computer systems, and eventually progressed into building guidance systems for space exploration. That career path led him to involvement in the development of such systems for all of the Apollo shots, the lunar excursion module, and the manned orbital laboratory.

Once the space program started to wind down, Gordon decided he needed something new. About this time, he met his wife, Joan, and following a suggestion from her father, became a field service engineer for Allen Bradley. Gordon spent most of the 1970s with Allen Bradley. Eventually, he tired of the demanding hours and constant traveling, and started working as a freelance consultant.

In the late 1980s, Gordon returned to Door County and, as he tells it, a simple series of events led him to where he is today. “Joan and I decided to come up here and kind of retire. The next thing I knew, I was doing a lot of computer work out of the house – people needed the help. We started Door County Computer in 1991. Then, in 1994, some people decided they needed Internet service up here … so I was talked into setting it up. There were only 13 users in the beginning, and we were pretty loose about billing. People got on for free, and people subscribed and never had to pay. We finally got serious, and this is the end result. Joan is the president of the company. I just watch and make decisions once in awhile.”

Today, Door County Computer offers both dial-up and wireless broadband Internet service to Door County, in addition to website hosting, email hosting services and computer technical help. As the company installs new transmitters on existing towers, affordable high-speed Internet service is now available to virtually everyone on the peninsula. “Once people realize they can get wireless for the same price as cable, and that it is more reliable and reaches places that cable simply never will, more people will switch,” predicts Gordon.

What about retirement? Gordon seems satisfied with the way things have panned out. “As a kid, I guess I always thought I’d get into Astronomy or Physics. At some point between childhood and adulthood girls became very interesting to me, and I guess other things got in my way. My life is totally unplanned. I just kind of ended up here, and I have no idea why. I don’t plan too far into the future with much of anything. Maybe someday, if I ever grow up, I’ll start planning and pick a direction. It just hasn’t happened yet.”