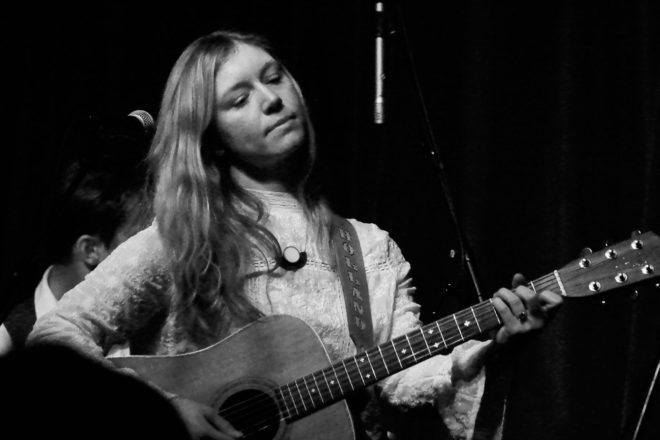 Band: I mostly play in a duo called Deathfolk with Nick Hoover. I’ve played with other bands, but none have been as consistent or easy. I also play solo.

Type of music: Folk. Although sometimes in the duo we call it Americana when we want to sound really cool.

Most recent Door County performance date and location: On Leap Day [February 29] of this year, I played a show in the round with Katie Dahl, Jeanne Kuhns and Jenny Bienemann at TAP. That was super fun and inspiring.

I really did not play or sing anything for months during the pandemic, which is very strange. But I had no urge to play at all. I just wanted to read as many books as possible.

What or who first got you into music?

I grew up in a household that was constantly filled with music. My parents had band practice in the living room every Wednesday night, and my dad collected neighborhood kids to start bands with my brother and me. We had every instrument at our disposal because my dad was an instrument repairman, and my mom was an early-childhood music teacher. I may have missed the opportunity to be a master at any one or two instruments because it was so easy to flit from one to another growing up. It was great. And since my parents moved to Door County, my dad has started changing my guitar strings again, and he makes sure I always have extra nine-volt batteries for my gear.

How would you describe the music that you typically create?

It’s all pretty folky and centered around feelings of home or love or loss. I mean, what else is there? I usually compose songs on the guitar. Even when I start something new on the banjo or keyboard, I return to the guitar because it’s my most comfortable tool. The songs that I appreciate most from others have straightforward messages conveyed through thoughtful lyrics, and I aspire to craft lyrics that anyone could relate to but aren’t dull.

If you could open a show or play for any artist, who would it be?

Gillian Welch. There are so many musicians that I love, but she’s really “it” for me.

When you’re not making music, what’s your day job?

I am a social worker by day. Both music and social work keep life in perspective.

What have you missed the most about the lack of gigs in 2020?

My friends! And the meditation that comes with playing with and in front of others. It’s really hard to play a song well and worry about everything that has to be done or everything wrong with the world. There is something inherently hopeful about playing music for others. It’s a source of connection. I’d really love some musical connection right now.