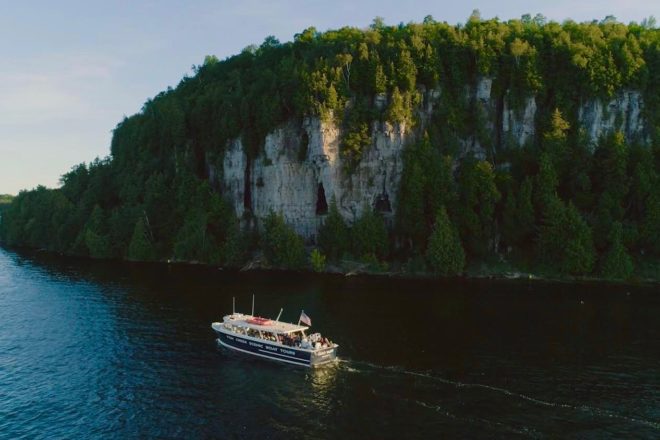 The Quo Vadis moves through the water with great dignity — unhurried, unfazed, unperturbed — and the heft of the boat’s sturdy, steel-framed construction makes for a smooth ride. Having carried passengers through the waters surrounding Fish Creek since its construction in 1962, it’s as if the boat has earned the right to such composure.

Every day, the Quo Vadis departs from Fish Creek on four different tours designed to illuminate the natural beauty and local history of the area. On the Millionaire’s Row and West Islands Cruise, the boat begins by heading south, following the part of the shoreline where stately, historical properties along Fish Creek’s Cottage Row — or “Millionaire’s Row” — stand. In addition to being the location of some of the most expensive properties in Door County, Cottage Row is also rich in history.

In 1896, businessperson George Clark was looking for a place to spend his summers away from Chicago. Finding no available property in Ephraim, his first destination, Clark eventually purchased one mile of shoreline in Fish Creek.

After overseeing the construction of his own home, he subdivided his remaining land into 26 lots. The homes that line Cottage Row today — many of them nearly 100 years old — retain the elegant style established in the early 1900s by wealthy Midwesterners such as Clark.

Arguably more impressive than the luxury of Cottage Row is the natural beauty of the landscape. As the tour continues, the Quo Vadis turns west and moves out into open waters. It maneuvers around the Strawberry Islands as white pelicans float overhead in groups called squadrons. In the distance, about six miles from Fish Creek, passengers can spot Chambers Island. After Washington Island, Chambers Island is the second-largest island in Door County — approximately 3,000 acres.

Native American burial mounds, decorated pottery and copper knives have been found on the island, suggesting a native presence there as early as 800 A.D. In more recent history, Chambers Island has been home to a lumber business, a thriving village and a Catholic retreat center.

When the Diocese of Green Bay owned the Quo Vadis, the boat completed the trip to and from Chambers Island regularly. One of its current narrators, Betsy Blahnik-Kuhn, remembers being aboard back when the boat’s primary purpose was not to run tours, but to shuttle Catholic retreatants to and from Holy Name Retreat House, then located on the island.

Blahnik-Kuhn’s father, Joel Blahnik, began captaining the Quo Vadis in 1975 and continued to do so for the next 30 years. In July 2019, current owner Cody Bolton purchased the boat.

“Each day [when] I hop aboard to narrate, my heart swells with pride to see how good she looks, how well she runs and how many people enjoy her calm carriage across the water,” Blahnik-Kuhn said.

Today, Blahnik-Kuhn’s rich experience aboard the boat and knowledge of the area inform her narration. She has innumerable stories to tell about the Quo Vadis and her time spent on board — stories of frightening moments in rough waters, unusual passengers and even a rescue mission. One anecdote in particular stands out to her.

“[The Quo Vadis] was so often used for hauling anything the islanders needed. The benches could all be unbolted from the deck, and vehicles could be loaded on — also tractors, firewood, lumber, huge fuel wagons to run the … generators and hundreds of propane tanks,” Blahnik-Kuhn said. “My favorite memory was when we tried to load a Volkswagen bus that would not fit until we realized we just needed to let the air out of the tires.”

Heading back east, away from Chambers Island, the Quo Vadis threads the needle between Adventure Island and the Little Strawberry Islands. If you keep a careful watch, you might be able to spot a bald eagle or two on Adventure Island.

Then the boat stops just off the shore of Peninsula State Park to give visitors an up-close-and-personal view of the Eagle Bluff Lighthouse. From the water, you can see the structure not only as a beautiful and historic landmark, but also as a once-functional, lifesaving navigational tool that sailors counted on.

In Latin, “Quo vadis” means “Where are you going?” As the boat makes its leisurely, steady way back to port, you may not know exactly where you’re going next, but you certainly know a lot about where you’ve been.