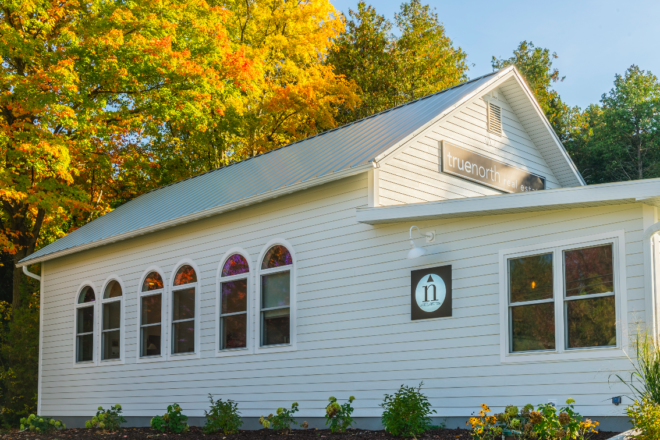 True North Real Estate moved into its new offices in Fish Creek in 2017, but only after an extensive remodel that paid homage to its former life as the Seventh Day Adventist Church. Photo by Len Villano.

By the time the Seventh-day Adventist Church finally closed its doors in Fish Creek in 2015, member Polly Kuehn knew it was time to move on.

The church was built by the congregation’s 64 members in 1892 on a plot below the bluff donated by Fish Creek founder Asa Thorp. By 2015 the congregation claimed just three members. Seeing the writing on the wall, the congregants transferred to the Sturgeon Bay branch and put the church up for sale. With a prime location, it appeared likely that the aging building would join the ranks of surrounding properties as a seasonal home or condo.

But the partners at True North Real Estate were searching for a new location for their offices, a search spearheaded by a woman with a renovator’s eye, a soft spot for local history, and a love of projects. For Jacinda Duffin, the church was a perfect match.

“One of the best things about working in Door County real estate is the history that’s all around us,” Duffin said. “We had been renting office space very close by, and I’d admired this building’s character for a long time. So we thought it was cool for us, a Door County real estate company that is always working with both old and new spaces, to take on the project of modernizing this classic building.” 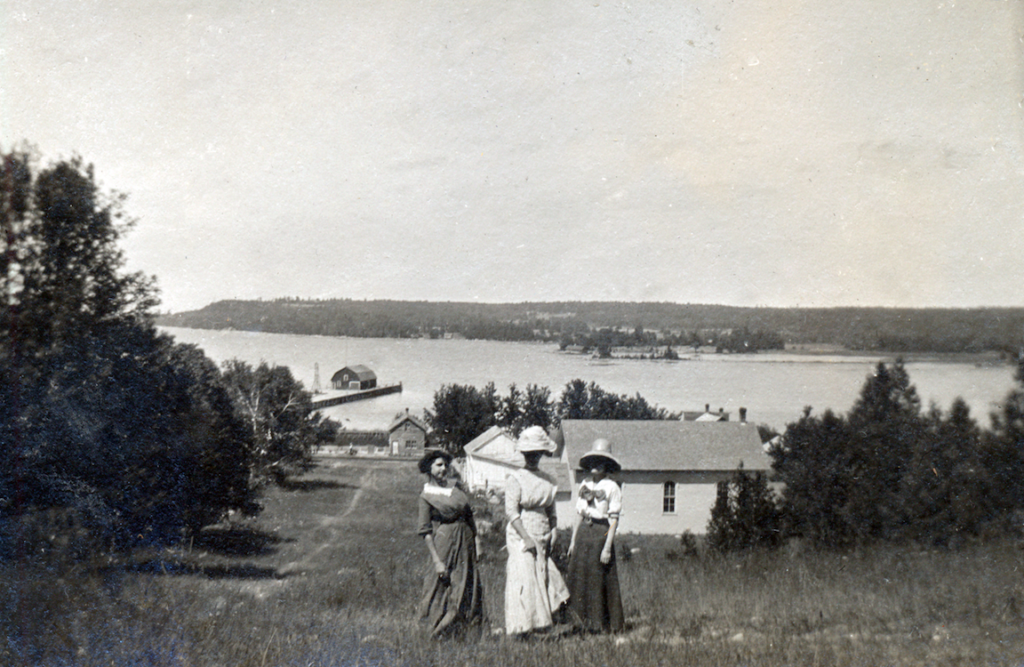 The church building (at right) as seen in 1910 from the bluff looking into Fish Creek Harbor. Photo by Mabel Weise.

Barb McKesson, president of the Gibraltar Historical Association (GHA), said the GHA wanted to buy it but couldn’t afford it.

“This was the next best thing that could have happened,” she said. “I was very happy to know a group would pick it up and do something with it.”

The partners loved the idea of repurposing a historical space into a commercial space, keeping their nine-person staff in downtown Fish Creek where they grab lunches, happy hour drinks, and host clients. That contributes to the vibrancy of the community, but it also offers the community a door to its history.

“If this were renovated into a private home, the community wouldn’t have access to it,” Duffin said. “As a living, breathing, working space that’s open to the public, they do.”

“It was definitely bittersweet,” Kuehn said. “I’ll always love the Fish Creek church, but I’m a realist. The building had significant issues. The floor was rotting, the walls weren’t in great shape, and it wasn’t winterized.”

Bryan Neubauer and his Ahnapee Construction crew took the building down to its bones, where they found runoff from the bluff behind the church had been wearing away at the structure since the day it opened its doors. They rebuilt it as a fully winterized, high-efficiency office. 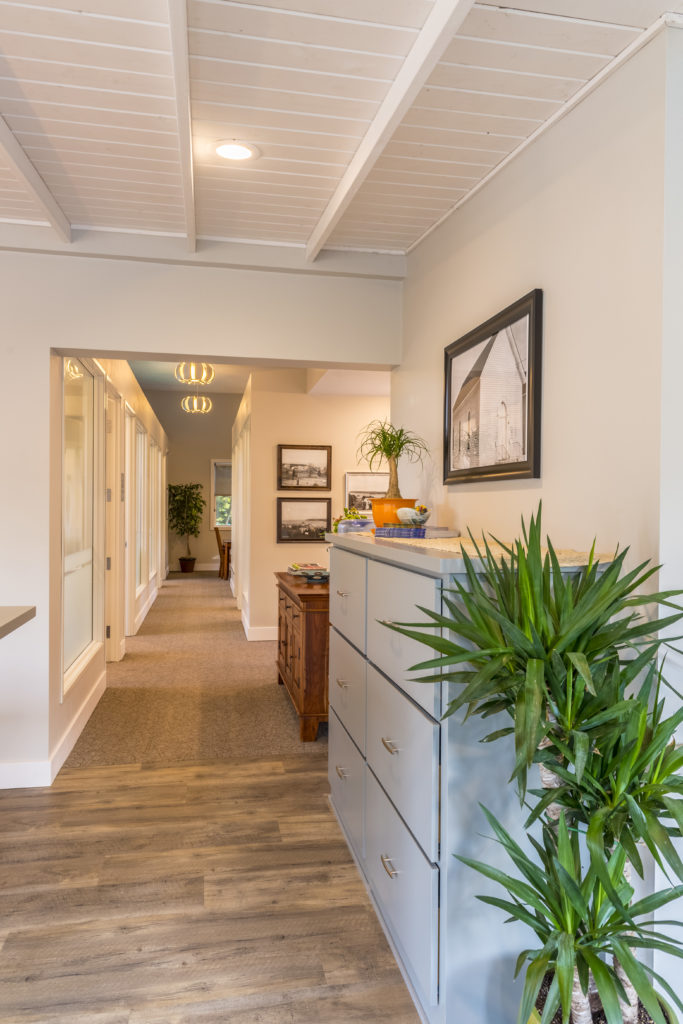 A look down the middle of the office reveals natural light shining through windowed offices into the mail hallway. Photo by Len Villano.

The parking lot was redesigned to squeeze in required parking but also to guide stormwater runoff away from the building’s foundation.

The church was never flashy and didn’t feature a grand entrance or towering steeple. The congregation was understated, and the building reflected that. The arched windows were a defining characteristic, Kuehn said, and Duffin made a point of keeping them.

“We did our best to keep it looking like a modest, white church,” Duffin said. “We tried to be mindful of the congregation that came before us.”

Inside there wasn’t much to save, but to maintain the spacious feel of the church they chose not to install a drop ceiling. Office walls stop at the base of the roofline, adding a feel of airiness to the otherwise cozy space. That feeling is enhanced by the addition of three more arched windows on the north wall and glass doors that give an open office feel while allowing partners privacy for delicate conversations.

“We wanted to be able to close doors, but retain interaction,” Duffin said.

A poured concrete floor enabled Neubauer to construct the offices in a modular fashion, something Duffin is particularly proud of. 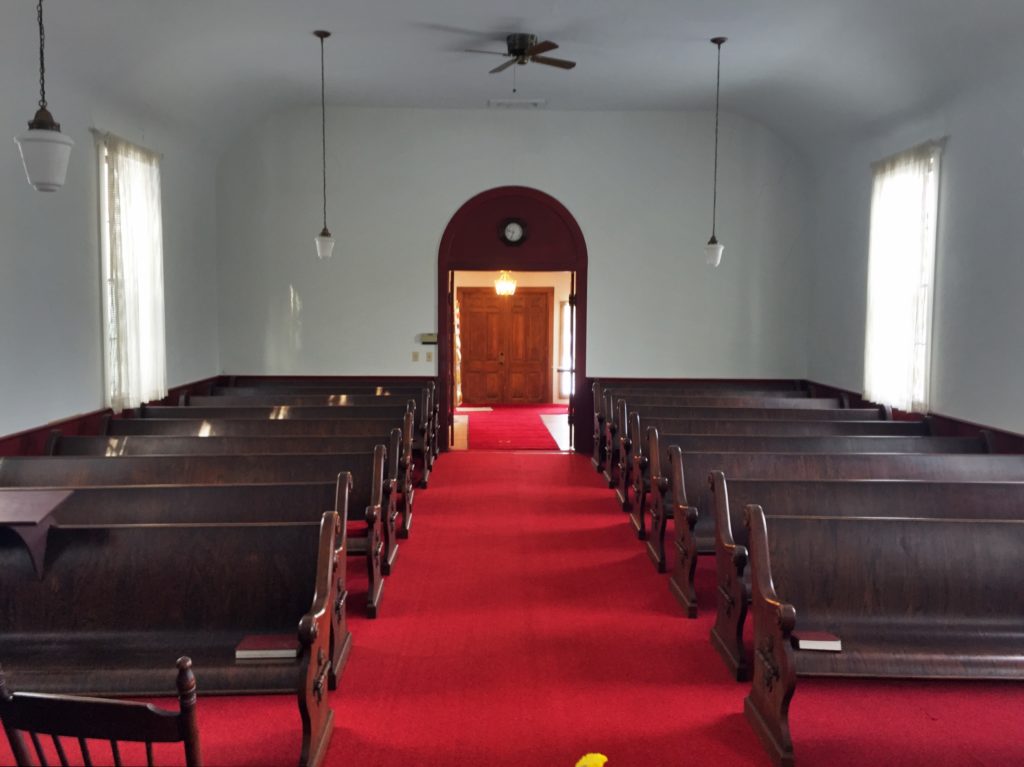 The interior of the building as it looked when it was still used by the Seventh-day Adventist Church. Submitted.

“This building is sound now for another 150 years, and can easily be repurposed for a completely different future use,” she said.

“When you learn about history, you really learn that you don’t ever really own anything, you’re just a steward,” she said. “It’s especially true when you buy a historic property. It means something to people in this community.”

“These historic buildings tell the story of Fish Creek as well as anything,” McKesson said. “It keeps Fish Creek viable by keeping a sense of tradition and a sense of place. They’ve done a nice job of keeping it in character. The pictures of the old church and village in the foyer tell the story for people.”

For Kuehn, it’s comforting to know the passion of her congregation is carried on by the new stewards.
“I feel wonderful about what has been done with it,” Kuehn said. “I know it was a labor of love for Jacinda.” 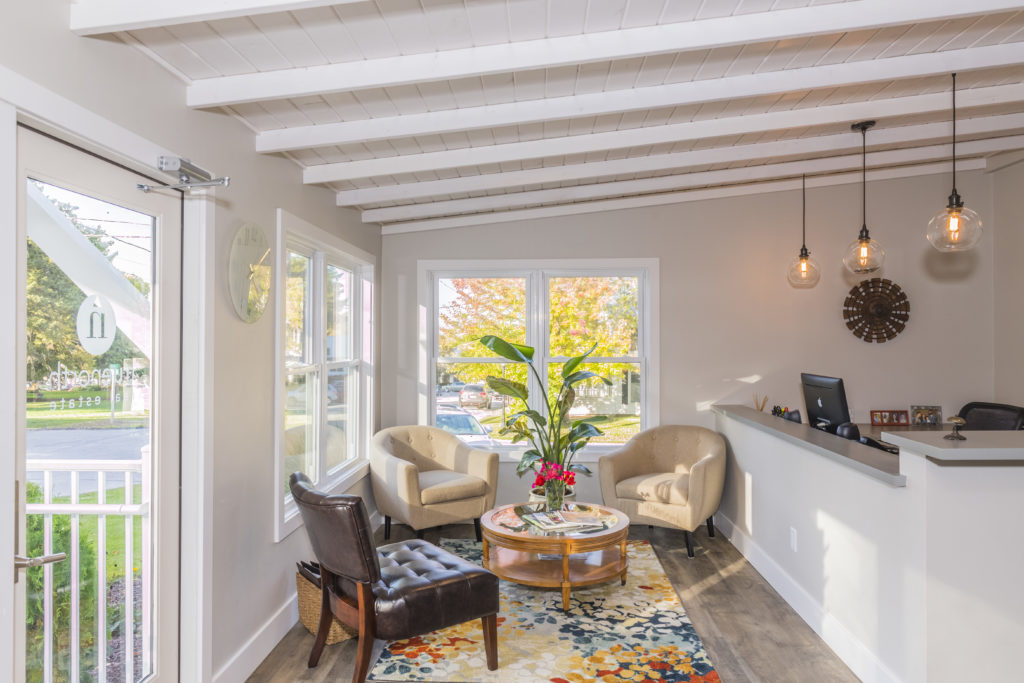 Sunlight fills the lobby of the True North offices, which features trendy touches like Edison bulbs hanging over the receptionist desk. Photo by Len Villano.