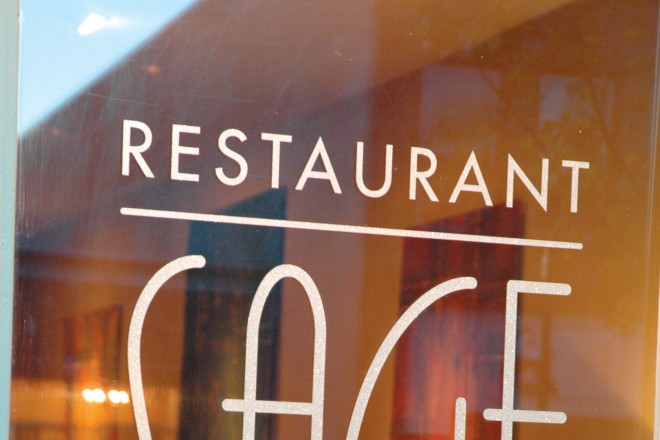 A sage is defined as “one venerated for experience, judgment and wisdom.” Mitch Wise, chef and owner of Sage Restaurant & Wine Bar in downtown Sturgeon Bay, despite the obvious pun on his own last name, is a restaurateur who certainly isn’t lacking in any one of those characteristics.

Sage, which opened in 1998, is the only intimate, urban-style restaurant in Door County’s only city. Located in the heart of Sturgeon Bay’s busy Third Avenue downtown shopping district, the restaurant occupies the former home of the Ace record shop. Wise says he was attracted to the building for two reasons: “the location and the floor.” The funky linoleum was all that Wise retained before designing and creating his intimate dining room and bar area.

“When I first opened, there were people who said I was crazy for trying to do fine dining in Sturgeon Bay, and said I wouldn’t last a year.” Wise is pleased to have bucked the predictions of the naysayers and survived to continually offer his patrons a unique dining experience in Sturgeon Bay for more than eight years.

Mitch Wise is a DePere native who owned a Green Bay restaurant, La Bonne Femme on Washington Street, for six years before moving to Sturgeon Bay and opening Sage. His restaurant experience goes even farther back: “I’ve been a dishwasher in some form or another since I was fifteen,” he says. Although the food business was in his blood from an early age, Wise was a pre-med undergraduate student, studying biology and chemistry at St. Norbert College. Still, he says he knew that being involved in the restaurant business is what he always wanted to do.

The dining experience Wise created in Sturgeon Bay is one of casual elegance. The small dining room seats 55, and the bustle and traffic of Third Avenue is buffered from the tables by a bar area dominated by a piano in the front window and a generous seating area. The Asian-influenced décor sets a simple yet modern, sophisticated mood. Wise is quick to point out that the dining room can be reserved for private functions and has even hosted intimate weddings and other small events.

The menu at Sage changes with the seasons, and has changed considerably since the opening in 1998. “When we first opened, the menu was more California-style cuisine,” what Wise describes as “cleaner foods” with less fat. He says the menu now reflects the changes that have taken place in American eating habits over the past few years, and labels his menu contemporary American–style cuisine.

Wise says the current menu reflects his many diverse influences, and combines French and Californian styles with a healthy touch of other ethnic foods. Following the trend of many fine dining restaurants worldwide, Wise endeavors to use as many local sources as possible for his kitchen, especially seeking out local produce during the summer months.

Appetizers, known as ?First Flavors,? can include a chicken liver moose paté with cognac smoked salmon ravioli with a lemon, caper and dill sauce; a smoked duck and brie quesadilla with pineapple/fig salsa; and crab cakes with cucumber relish and spicy avocado mayonnaise, which Wise says is a particularly popular dish that can always be found on the menu.

Sage also features an assortment of gourmet pizzas, including portabella mushroom with caramelized onion and goat cheese; a seafood white pizza with shrimp, scallops, asparagus, tomato and red onion in a gorgonzola cream sauce; and a Mediterranean-style pizza that combines olive tapenade, pesto, artichokes, tomato, capers and Greek gyro meat to eloquently capture many of the region’s flavors all at once.

The wine list at Sage is updated yearly and features an eclectic mix of California, Oregon and European wines. The offerings highlight a number of mostly smaller wineries, and are  not dominated by any one winemaking area, a fact that Wise cites with pride. Sage also features ten different bottles from the local Stone’s Throw Winery, which earns its own entire page of the list.

Sage features more than twenty wines available to sample by the glass, which is a fairly large number for any type of restaurant. Wise says the single glass option is based on his perception that drinking habits have changed over the years, along with eating preferences. He notes that his patrons now choose to try different wines throughout an evening, rather than purchasing one bottle for an entire meal. He also says that diners are simply not drinking as much.

One issue Wise is struggling to overcome is the misperception that Sage is too formal for Sturgeon Bay. He suggests that patrons can come to the restaurant in blue jeans, hang out on the overstuffed couch and enjoy an appetizer and a glass of wine. He insists that his restaurant is not stuffy: “A visit to Sage does not need to be an event,” he says.

Wise notes that Sturgeon Bay is a very different market than Northern Door County. For one thing, Sage is open six days a week year round, seven days a week during the summer season. He says his establishment couldn’t close in winter, as some Northern Door restaurants do, because Sage doesn’t get the seasonal influx of business in summer. He insists that he likes the year round pace of Sturgeon Bay; he says he wouldn’t want to be so dependent on seasonal traffic.

One advantage to his year round schedule is his ability to provide continuous employment for his professional staff (“no college kids”), which numbers ten during the summer and drops down to eight during winter. While Wise prefers to spend most of his time in the kitchen, he is able to leave the front-of-house operations to the rest of his team. “I‘ve got a great staff,” he brags.

Wise especially enjoys the downtown location of his restaurant, and appreciates the diversity of other dining establishments nearby. “Everyone fills a niche along the street,” he says, describing his fellow Third Avenue restaurants. “We’re fine dining. The Inn at Cedar Crossing and Dal Santos are more family places.” Without Mitch Wise and Sage, the Sturgeon Bay restaurant scene would be missing a key element.

Menus and more information about Sage Restaurant & Wine Bar can be found online at www.SageDoorCounty.com.