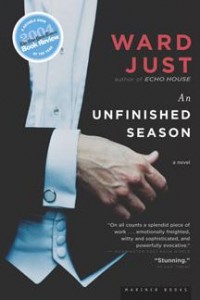 Ward Just provides a rich portrait of life on the North Shore of Chicago during the 1950s. This novel features finely crafted writing and dialogue. It is one of those rare instances where I was hooked by his very first words, which begin as, “The winter of the year my father carried a gun for his own protection was the coldest on record for Chicago.” Nor does the tempo or the beat of the novel falter for a moment thereafter. Needless to say, it is truly a pleasure to read a book like this.

The story portrays the socially prominent Ravan family while centering on Wils, their 19-year-old son. Much of the first part of the book vividly details suburban family life before suburban sprawl when the older suburbs were still surrounded by farms. After the family landscape has been beautifully laid out, the story then follows young Wils Ravan through his eventful senior year at high school and on to a summer filled with work and play; especially play at the numerous debutante parties for the daughters of privilege who grew up in the mansions of Lake Forest and Winnetka.

This is not, however, a paean to the high society of those times, since Wils is more of an observer than a participant in the follies and foibles of the young. That summer season of debutante parties is only briefly covered as a segue into his first love affair and perhaps the most meaningful relationship of his life. Even the parties themselves are viewed with somewhat of a jaundiced eye by Wils, since he lives on a former farm in Quarterday (as opposed to Half Day) rather distant from the exclusive enclaves situated on the North Shore.

Along the way the author also provides a remarkable sense of the zeitgeist of that era. While we remember the Eisenhower years as being placid and tranquil, they were anything but for the corporate heads that had to deal with the growing power of labor unions who were filled with members tired of years of restraint after the Depression and the sacrifices made because of World War II. Wils’ father is the president of a Chicago printing company whose unions went out on strike. The confrontation turned bitter and involved the importation of strikebreakers with violence being committed by both sides.

This is also a rather heartfelt portrait of family life in the 1950s with Teddy Ravan as a domineering father accustomed to being in command, but with a wife who has the intelligence to work on him in her subtle way to achieve her own ends. Think “Father Knows Best” when we all know that nowadays it is usually the wife who knows best. The quiet family scenes in this book are portrayed with great sensitivity and insight.

Teddy Ravan is the rough and tumble son of a farmer who had been sponsored by a Lake Forest industrialist for his four years at Dartmouth, where he excelled at hockey and became a star player. He later went on to earn a law degree and marry a socially prominent woman from Connecticut. Her father is an old school maritime lawyer who practices in New York City, but their similar legal backgrounds fail to mask the fact that they have nothing else in common and barely tolerate each other.

Teddy Ravan’s move back to Chicago to work as the lawyer for two Jewish political operatives in an era of rampant anti-Semitism only further added to the disappointment of his father-in-law. It all worked out well for Ravan, however, when the owner of a printing company brought him aboard after he had provided valuable service. The printing company was later renamed Carillo & Ravan, and eventually Teddy took it over after the retirement of his mentor. His growing financial success allowed him to expand his family home in Quarterday. (In spite of living near Chicago for almost 40 years, I have no idea where Quarterday used to be or even if it actually existed. Probably somewhere near Niles, since Half Day is located due west of Highland Park and is still known by that name.)

Wils lost a year in school because of a severe illness that had left him bedridden, so he finished high school a year older than his classmates. Much to his father’s disappointment and to his mother’s pride, Wils turned into a voracious reader during this period. He never did achieve the physique or the temperament necessary to become a sportsman like his dad. His illness and his father’s predilections also kept him at a school in Illinois when many of his former grade school classmates went out east to schools like Hotchkiss.

There is nothing like that heady summer spent as a high school graduate with college and the whole world opening up before him. Wils spends his days working for a newspaper company and his nights going to a jazz club on Bryn Mawr or dressing up in black tie to attend one of the many debutante parties. It is at one of these soirées where he meets and falls in love for the first time in his life with a mysterious and sophisticated young lady from Chicago. She turns out to be Aurora Brune, the daughter of an enigmatic but socially prominent psychiatrist.

The intelligent and wonderfully conceived dialogue between Wils and Aurora is another feature of this novel. This novel is a lush portrait of those times with the bittersweet relationship of Wils and Aurora a decided highlight.