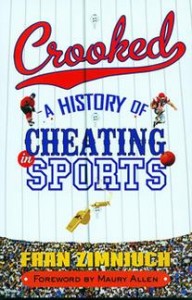 Crooked:  A History of Cheating in Sports

You probably heard your father say it when you were a babe in arms. Your coach told you these things the moment you flubbed a catch. Together, they’re Sportsmanship 101:  “It not whether you win or lose, it’s how you play the game.” Also:  “Cheaters never win and winners never cheat.”

You can’t, that’s how. But in the new book Crooked:  A History of Cheating in Sports by Fran Zimniuch, you’ll learn that cheating in sports is nothing new.

Innocently or not, we’ve all seized opportunity to make life better for ourselves at the sake of others. Fran Zimniuch says that cheating in sports is opportunity plus willful dishonesty and ignoring rules to gain unfair advantage. But, since it’s human nature to fudge a little, where do we draw the line?

Surely the line was first crossed during the so-called Black Sox scandal that’s still debated almost a century after it happened. Then again, maybe not. Zimniuch writes of cheating in baseball several decades before the Sox scandal in 1919.

College basketball was “nearly destroyed” by a points-shaving scandal in 1951. Thirty players from City College of New York and six other schools were charged with accepting money to fix games. It may seem insignificant now and there have been many NCAA scandals since then, but the events of 1951 hurt the reputation of several players and cast doubt on the legacy of a talented coach.

Can ball or equipment altering be considered as cheating? Are lip reading and secret videotaping talents or tricks? Can a fight – something fans often expect – a sneaky way to give your team an advantage? Are officials and umpires trustworthy? Is it unethical for a player to get a “needle in the butt” or should the use of drugs – a nasty little sports secret for well over 200 years – be allowed as a boost-up in the game?

Any way you look at it, says Zimniuch, it all depends on one thing:  point of view. If your team is taking advantage of opportunity, it’s all good. If it’s the opposing team, they are most definitely cheating.

Crooked:  A History of Cheating in Sports is a nice little surprise of a book. Using psychology, history, sociology, and a fan’s love of the game, author Fran Zimnuich takes a hard look at duplicity in sports, both pro and amateur. His manner is folksy and fan-friendly as he examines dozens of unsavory scandals. Interestingly enough, he’s also careful to remind readers that the vast majority of athletes “do not cheat, do not use steroids, and do not cross that invisible line…”

I liked that balance, and I liked this book.

If you’ve been shaking your head about the plethora of sports scandals in the news lately, then grab this perspective-giving book. For you, Crooked:  A History of Cheating in Sports is a good bet.