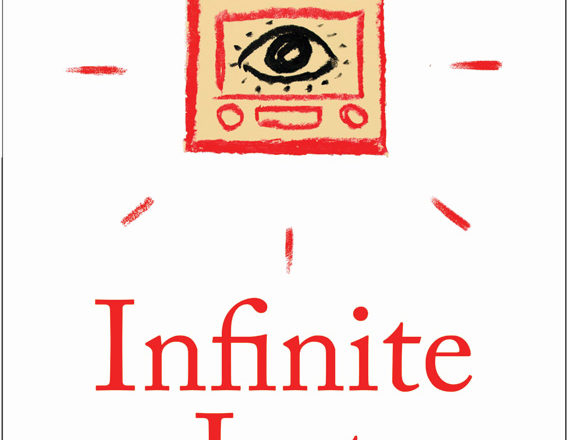 In the weeks since I finished David Foster Wallace’s canonized Infinite Jest, other books I read feel as though they’ve been run through a thesaurus machine with the dial turned way down. Perhaps that is why I asked our editorial team if I could write something about my experience reading the 1,000-page text.

But even as I asked, I wasn’t quite sure what I would write. A review? That seemed odd, given that the book was published in 1996 and its relevance only seems to be resurging in my one-person book club, which typically meets at the Bayside Tavern over a shot of bitters on the nights I work late in Fish Creek.

Still, the text continues to reverberate in my life and in the world around me. The book is set in the future, which, at the time of Wallace’s writing, means about 2010. Society has become so obsessed with entertainment and commercialism, even the years are subsidized by private companies (most of the novel takes place in the Year of the Depend Adult Undergarment).

There is a movie, Infinite Jest, that is so entertaining anyone who watches it loses the will to do anything else, succumbing to a vegetative state of desire and continuing to watch the film over and over again. There is an eccentric halfway house, where the theme of addiction is linear. There is an elite tennis academy up the hill from the halfway house, where world class athletes recreate with drugs in an attempt to fill a void left by their achievement (a less linear take on the theme), like a dog in a racetrack who catches the rabbit and looks up, unsure of what to do now.

Perhaps most prescient, given Wallace was writing in the early 1990s, is the short but poignant character development of Johnny Gentle, who is the President of the Organization of North American Nations comprised of the United States, Mexico and Canada.

Gentle is a celebrity vocalist who makes a surprise run for President with support from a “pissed-off American electorate,” whose win causes, “Libertarians [to] chew their hands in envy as the Dems and G.O.P.s stood on either side watching dumbly, like doubles partners who each think the other’s surely got it.”

Gentle was the first President to swear in his inaugural address, spinning the microphone by the cord like his days as a crooner.

Love or hate Donald Trump, the comparisons are humorously striking. Most critical reviews point to Wallace’s humor and wit, but the author maintains the novel is essentially a sad story about how unwilling or unable we are to put the work in to improve the soul’s estate, choosing empty-calorie entertainment instead.

In a layered onion-like way, the structure of the text alludes to this broad theme. The 100-plus pages of footnotes require the reader to literally break the action and flip to the back of the book. Portions of the text seem impassable, such as the five-plus-page footnote of the filmography of a fictional director, or a single sentence that can run on for three pages, or a list of all the exotic facts you learn in a halfway house, including, “That it is possible to make rather tasty poached eggs in a microwave oven.”

Wallace himself said there are many sections of the book that you finish and need to go out and have a cigarette, which was increasingly difficult for me as a non-smoker.

I found motivation in knowing the difficulty was intentional. With the theme of the book being that society wants to be passively spoonfed its entertainment without having to do any thoughtful work, a reader who puts Infinite Jest down because it was difficult has proved Wallace’s point. Only by completing the book do you defy Wallace’s theory of society, which is meta enough to fill many literary journals of scholarly critiques.

Here’s more meta for you:  Wallace himself, upon achieving the skyrocketing success of Infinite Jest and being hailed as the defibrillator of literary fiction and cementing his place in a nonfatal Darwinian-like genus of contemporary authors that excel through sheer effort and force of will, struggled with an empty feeling. As a budding author who wanted nothing more than publication, he realized that once you achieve an end goal, you remarkably end up feeling much the same as you did before. Or, as a halfway house would teach you, “That, perversely, it is often more fun to want something than to have it.” A dog that catches the rabbit.

That idea is not just a theme of the book, but it is the practice of reading the book itself. The dense, 1,000-page text takes months for most to finish. It often requires a frustrating level of attention and backtracking for clarification. The size of the book itself compels people to ask what you are reading, forcing you to regularly distill the text in a way that can be understood by tavern goers after two or three Miller Lites.

Wallace committed suicide in 2008 and it’s hard not to think of his depression exacerbated by watching society head in the direction he feared. In writing Infinite Jest, I imagine he wanted to share his sadness, but, paradoxically, through a wildly entertaining, humorous and difficult text. For me at least, he achieved what he set out to do.

Upon finishing Infinite Jest, I accomplished something I set out to do since my first creative writing professor in college spoke of “DFW” with indoctrinated zeal. Over the years, I warmed up with Wallace’s A Supposedly Fun Thing I’ll Never Do Again, interviews both with him and about him, and commentaries on his work and legacy. I regularly checked in with Peter Sloma at the Peninsula Bookman, who sold me my copy of Infinite Jest, about my progress. I taped the binding of the overused book and watched as its cover turned coffee-stain brown. I can still feel the weight of the book and the way it bulged into my hip in my bag.

I finished the last few pages of Infinite Jest at the Bayside Tavern and I felt approximately the same as I did before, the thought of which made me a little bit sad. I took another shot of bitters.

Once again, Wallace was right. And that thought made me a little bit happy.