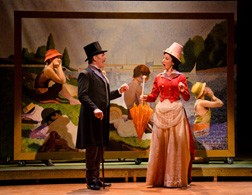 George Seruat’s paintings come to life on the Peninsula Players’ stage, pictured are James Rank and McKinley Carter as Jules, a fellow artist, and his wife as they comment on Seurat’s “Bathers at Asnieres.” Actors Amanda Hartley and Brent LeBlanc help to bring the painting to life. Photo by Bruce Mielke.

The Peninsula Players’ current production is, figuratively speaking, anything but a walk in the park. The Sondheim musical features a huge cast and the formidable task of recreating the genesis and execution of Georges Seurat’s iconic painting “A Sunday Afternoon on the Island of La Grande Jatte” – all on the Players’ stage.

While the sophisticated music and lyrics of Stephen Sondheim are a delight, and the singing in this production is certainly fine, the star of Sunday in the Park with George is the visual aspect of the production. The painting, a seven by ten foot masterpiece in the permanent collection of the Art Institute of Chicago, comes to life on stage, as cutouts of trees and boats, people and dogs, are flown and glided into place to supplement the human subjects in the painting who are in turn portrayed by actors authentically costumed to represent their counterparts.

Sean Fortunato ably portrays Seurat’s obsession with his work, to the exclusion of emotionally satisfying his mistress Dot, aptly played by Cassie Slater. The setting alternates between the park and artist’s studio as theatergoers are offered brief but entertaining explanations of pointillism Seurat’s (impressionistic painting technique) and his theory of color. Those familiar with the his work know that rather than using brush stokes, he applies tiny dots of color that, as the viewer moves back from the painting, are connected by the eye of the beholder, adjacent dots of two colors becoming yet a third, and the process itself, a potential metaphor.

The Pulitzer Prize winning musical no doubt earned the honor as much from its conception as from its composition. The human subjects of the painting represent characters from various walks of life brought together on a pleasant summer Sunday afternoon in a park; the fictional characters have distinct personalities – another painter, the artist’s mother, servants, American visitors, a baker, a boatman, shop girls – all of whom are observed by and in some way interact with the artist.

Act one concludes with a scene that is stunning not only visually but musically, an emotionally engaging theatrical experience as at last, the painting is complete.

The book takes liberties with Seurat’s biography, but the play is a musical, not a documentary. Act two discovers through the conversation of the painting’s subjects that Seurat has become a father, that his mistress has left for America with another man and her child, and that the artist has died at age 31.

Then the plot careens from the Paris of the 1880s to the America of the 1980s, and to another George (also played by Fortunato), a sculptor who creates modernistic abstract industrial pieces that incorporate sound and light. On display in a gallery is his take on the famous Seurat “Sunday Afternoon” painting, the esoteric connection amusingly lost on viewers.

George the sculptor shares a speaking platform with his grandmother (played by Slater) to talk about his work and the fact that he has been invited to display his “Sunday Afternoon” sculpture on the Island of La Grande Jatte in Paris. Grandma insists that she is the daughter brought to America by Seurat’s mistress Dot, and that her grandson is subsequently the great-grandson of none other than Georges Seurat.

(In reality, after Seurat’s death, his infant son by his mistress died two weeks later from the same disease.)

At a reception following George the sculptor’s talk, actors who portrayed characters in the painting are now attendees at the fete, amusing the audience with their transformations into art connoisseurs and critics; one is the younger George’s former wife.

The plot leaps back across the pond, discovering George the sculptor on the famous island which has now lost its nineteenth-century splendor, just as the sculptor seems to have run his course with his repetitive pieces.

Magical realism brings back to the park Seurat’s mistress who mistakes him for the historic artist. She offers the wisdom that only family and art matter, as they alone are passed through subsequent generations. And then Seurat’s mother, along with the entire cast of characters that comprise the “Sunday Afternoon” painting, appears, the spectacle that ended Act One reprised, concluding with the younger George realizing that as an artist, he has a blank canvas before him, and the opportunity not only to redeem himself, but in a sense, offer vicarious redemption to his famous great-grandpa.

The production builds momentum ultimately leaving theatergoers with the sense of having been engulfed by the totality of an experience.

Sunday in the Park with George, music and lyrics by Stephen Sondheim, book by James Lapine, runs through August 11 at the Peninsula Players Theater, Fish Creek. For information call 920.868. 3287 or visit http://www.PensinsulaPlayers.com.