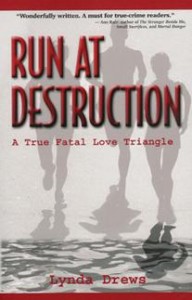 Green Bay author Lynda Drews has authored an intriguing entry into the active field of True Crime writing with Run at Destruction. Making the work remarkable, and therefore of high interest is Drews’ intimate and personal knowledge of the details of the true story of a questionable death in Green Bay.

Deftly Ms. Drews draws the reader into the story by describing the sport in which she and her best friend, Pam Bulik, are scheduled to participate on a Saturday morning in April. They planned to attend a run sponsored by Joggers Joint, a local running-gear store, but without prior notification, Pam fails to appear and the reason for her absence becomes the core of the book. As we follow the police investigation and their deepening involvement, after Pam’s husband reports his discovery of his wife’s dead body in their sunken tub, the reader slowly realizes a crime may have been committed.

Adding to the story’s suspense is the fact that the dead woman may actually be a murder victim, and the most likely suspect may be her husband, Bob. Not surprisingly, he proclaims his innocence. The trouble is, it soon turns out he’s been having an affair with another woman, and as Lynda’s story further unfolds, we are told Pam learned about Bob’s extra-marital activity some months before her death. The married couple even attended several sessions with a marriage counselor trying to resolve the problems in their relationship. At one session, Bob promised to be faithful. To no avail.

Living in a relatively small community, it is not long before Pam and Bob’s friends and neighbors became aware of the couple’s difficulties. Some are not as surprised as one might think because they considered Bob a loner, somewhat conceited and not open to talking about himself. Although not stated explicitly by the author, Bob, it seems, is not well liked.

Being a main character who is directly involved in a real story, the author has the advantage of knowing…before she begins writing…virtually everything gathered by the police and later used in court by the prosecution and the defense in the trial of Bob Bulik. In fact, Ms Drews either has an extraordinary memory for storing details and/or has taken the advice “to journal your life” which she has given to others. For no fact or feature of the story seems to be absent. As an example, even the color of the accused and the attorneys’ ties, shirts and suits each day in court is reported.

The author’s intimate physical and emotional involvement is, however, also a potential disadvantage. For example, she is not always unbiased in her attitude toward the accused. Nor does she always see in a balanced light, someone she considers an adversary. Fortunately, this bias surfaces rarely.

Another disadvantage in being a direct participant in a tragedy one is reporting as a writer is the inability to construct, develop and manipulate the plot of the story. She must only consider what is known, not what she imagines. Again, Ms Drews overcomes this potential handicap admirably. One way she accomplishes this is by introducing the sport of jogging and marathon running from time to time wherein she is on solid ground. This feature provides breathing space in what might otherwise be a rather grim narrative. It also establishes the social bonds that exist between the Buliks and their friends and neighbors who people the story and provide a high degree of human interest. In 1985, when the story takes place, running as a sport was just coming into its own, and as the story progresses, we get a sense of its growth.

It would be unfair to the author of such a challenging story to give too much information away and thus spoil opportunities for readers to relish the story and make discoveries.

Suffice it to say, Ms Drews handles the lengthy trial of Bob Bulik with skill and sound judgment. Drawing on her own experience and numerous court records, she paints a vivid picture of each succeeding day, from the selection of the jury to the competent judge down to the vocal spectators and final verdict.

For those who like stories of true-crime or a convoluted mystery surrounding a questionable death, Run at Destruction: A True Fatal Love Triangle will exercise high appeal.

Fred E. Schwartz formerly owned and operated Baybury Books in Ephraim. He has written four books of essays, including Seasons on the Peninsula, on Door County. Fred was the editor of the Baybury Review for six years, and also wrote numerous book reviews and columns for other publications in the area.