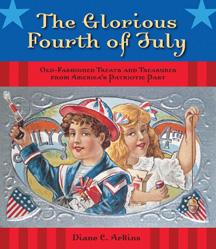 The Glorious Fourth of July

Presents won’t be necessary, but your presence is appreciated.

At this birthday celebration, there won’t be many goodie bags, pony rides, magicians, or party favors. Ice cream might be nice, especially if you’re having the party outdoors, and you’ll want plenty of cold drinks on hand. Birthday cake won’t be necessary, but you’ll definitely want candles of the Roman kind.

Before you get that party started, though, read the new book The Glorious Fourth of July by Diane C. Arkins, and find out how to have an old-fashioned red, white, and blue holiday celebration.

When we think about celebrating Independence Day, Arkins says, many of us automatically think about parades, picnics, and fireworks. While there are similarities, the Fourth of July 100 to 150 years ago was actually quite different than our modern celebrations.

First and possibly most importantly, fireworks are more regulated. Public displays of fireworks were an important part of the celebration then, but private stashes – loud, obnoxious, and dangerous firecrackers – were just as popular, which created controversy as well as injury. “We all dread the coming of the Fourth of July now,” said a commentator in 1854, referring to adults and firecrackers. Safe and Sane organizations were created in many cities in the early 1900s, and fireworks’ use became more sensible.

Fourth of July in the 19th and early-20th centuries almost always meant parades and community programs. Costumes were de rigueur, and no lady was seen without her crepe paper outfit, particularly if she was having a party. And if she’d planned a little get-together, decorations and party favors were important (including the Jack Horner pie filled with candy and trinkets). Arkins includes recipes in this book, because celebrants expected nothing less than festively patriotic foods.

As for enjoying the Fourth, the New York Times had these wonderful (and still appropriate) suggestions in 1893:  Don’t apply hot and rebellious liquors to your blood, don’t make bathing suit jokes, and don’t hurry. You can do that any day.

And the Birthday Girl at this little party we’re having soon? She’ll be 233 years old this July 4th, so be sure to wave red, white, and blue when you wish her a Happy Birthday.

Jam-packed with old-time pictures, and postcard and memorabilia replications, The Glorious Fourth of July is one of those unique books that you can’t stop paging through, especially if you like entertaining or pop-culture history. Interspersed with the colorful pictures, author Diane C. Arkins offers explanations of the times and authentic articles, notes, and quotations from the past. Arkins says that it’s too bad, in this age of high-technology, that ephemera (postcards, menus, invitations, and so on) aren’t kept and passed down to other generations. As you savor the reproductions in this book, you’ll agree.

Lovers of this most American of celebrations will enjoy this book, as will anyone who wants a patriotic look at social history. If Independence Day brings out the kid in you, pick up The Glorious Fourth of July. It’s a bang-up good read.