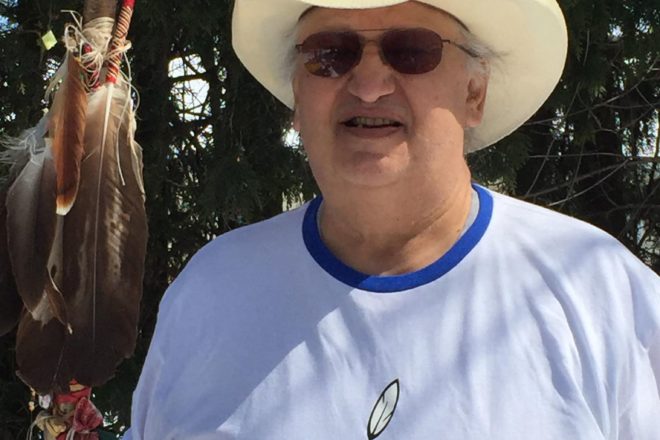 “Its ragged, ominous chords, overdriven and dragged to a crawl, sounded like an invitation to a knife fight.”

“Rumble” was a sound heard around the world. Who guitarist Pete Townshend is one of many guitarists from a certain era who claim they would never have picked up a guitar if they had not heard Link Wray’s fierce power chord attack on “Rumble.”

In addition to being an inspiration to many great guitarists, “Rumble” also has the distinction of being the only instrumental ever banned from radio airplay. The record was banned not so much for its ominous sound as for its title, the word “rumble” having taken on greater significance during the birth and formative years of a new class in American society — the teenager (but all that is for another story). Not wanting to incite juvenile delinquents into gang fights — or rumbles — some radio stations refused to play “Rumble,” which only helped propel the record to hit status. 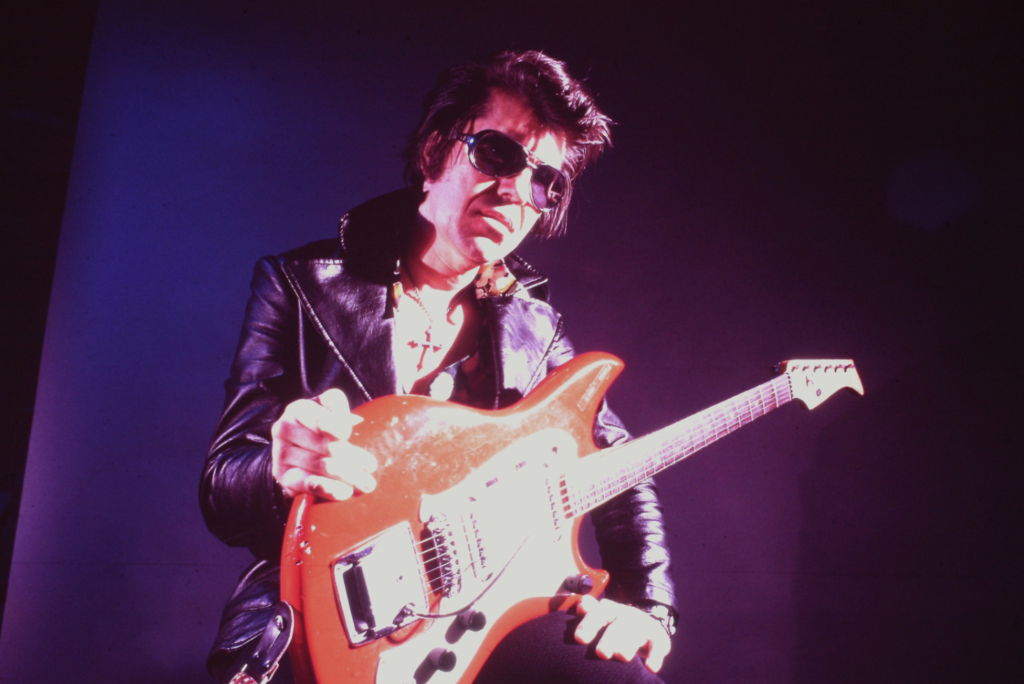 The song was created by accident in 1957 when guitarist Link Wray and his band, the Raymen, were asked to play an instrumental hit of the time called “The Stroll.” Wray didn’t know the chords to that tune, so came up with the “Rumble” stroll. When dancers kept asking Wray and the band to “play the weird song again,” they added the song to their repertoire with the title “Oddball” and prepared to record it. However, once in the studio, Wray wasn’t getting the sound he wanted, so he used a technique that has become legend and still has guitar players asking, can I really do that?

This is how Wray explained it once to Guitar magazine: “I got a pen and started punchin’ holes in the tweeters. I didn’t mess with the big speaker. So I started playing and got that distorted sound, plus I had a tremolo. I used a combination of that at the end.”

For that, Wray, who died in November 2005 at the age of 76, is considered the father of the power chord, the missing link between early blues guitar and electric rock. He also offered the way ahead for punk, thrash and heavy metal. 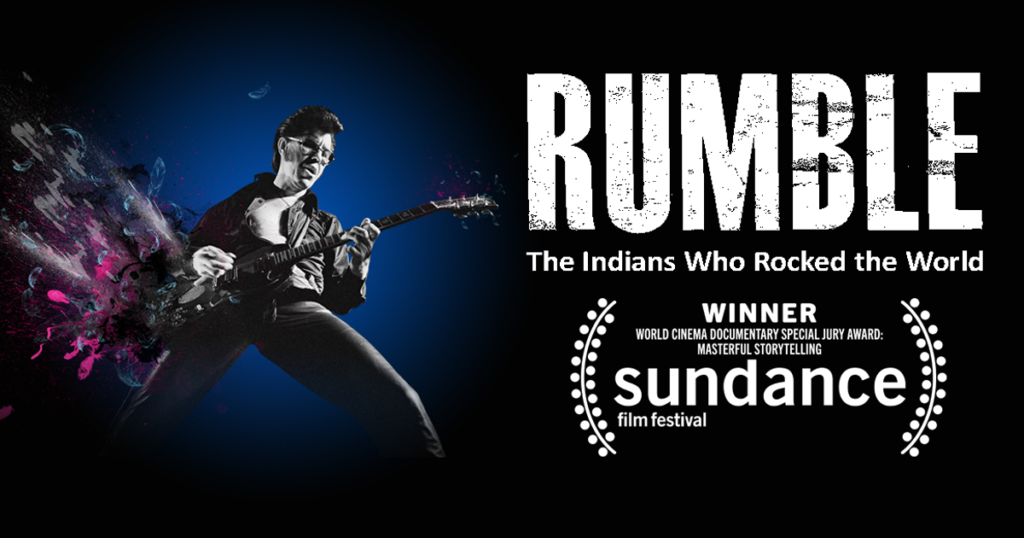 Fred Lincoln Wray Jr. was also three-quarter Shawnee Indian, which is why he and his song headline the award-winning musical documentary Rumble: The Indians Who Rocked the World, which the Peninsula Pulse is presenting at the Kress Pavilion on Friday, Nov. 23, at 6 pm, in honor of Native American Heritage Day.

“The gentleman that the movie is about, I’d never heard of him. I’d heard the music, but I never heard of him,” said Richie Plass, a musician and member of the Menominee and Stockbridge/Munsee, who will introduce the film.

In July Plass presented the film in Oneida, and he promises a lot of eye-opening music and revelations about the people who make it.

“There are some surprises in there,” he said, mentioning that it was always common knowledge among Indians that Robbie Robertson of The Band is Seneca, “but I bet a lot of non-native listeners did not know that.”

Plass said he always had music in his soul, but it took him awhile to find the right instrument.

“In third and fourth grade, I took piano lessons at St. Joseph Catholic Indian School in Keshena, from Sister Katherine Edward. To this day I know there’s something they call middle C,” he said. “As I got older, Elvis came around. Then I wanted to play guitar. My Dad got me an old guitar and showed me some chords, but I could not coordinate between my brain and fingers and everything else. When The Beatles came, the thing I liked about Ringo, he’d be sitting there, shaking his head, smiling. I thought, that looks like fun. I think I can do that.”

While he had the will to play drums, he didn’t have the means.

“I started playing what today they call air drums. I’d sit on the clothes hamper with a ruler in one hand and a pencil in the other and I’d drum along. I did that forever,” he said.

Back in the 1960s local bands would play dances at the Legion Hall in downtown Keshena. One Friday night 14-year-old Richie Plass is there when the band’s drummer gets sick and the band needs someone to fill in. When the band leader asked him to play, even though he had never sat at a real drum set before, Plass did not hesitate to say yes.

“All I had been doing was watching all these drummers. I knew how to hold the sticks, but I had never played,” he said.

The next day his dad asked how the band was. Richie told him he had drummed and had a great time. A few days later Plass gets home from school and his Dad asks him to take a ride to a friend’s house. They go into the guy’s attic, where there is a drum set. They bought it for $30.

“We take them in the basement and my dad sets them up and he sits down and starts to drum. I’m standing there, 14 years old, what the hell? I didn’t know he was a drummer,” Plass said.

His Dad gave him a stack of 45s and said, “If you can learn all of those songs, maybe someday you’ll be a drummer.” “An hour later, I went upstairs and said, come and check me out,” Plass said. “After that my mom and dad would take me to all these other bands and performances, and I would stand there and watch the drummer. That’s how I got into it. I’m always remembering what my dad told me when I started drumming: ‘Remember now, there’s always going to be somebody better and always somebody starting out. So do what you do and have a good time. We only need two things in life. We need music and a smile. If you can play a song and make someone feel good, that’s it.’ That’s true.”

Plass has been a member of and led a number of bands through the years, most recently The Flying Feather Band. He considers a 2007 show with that band to be his ultimate performance experience.

“We were part of an all Native American show in Nashville at the Ryman [aka the Grand Ole Opry]. I kept telling the guys it was just another gig,” Plass said.

The Flying Feather Band was scheduled to play backup for a singer from Iowa, and then a couple of their own songs. During dress rehearsal, the woman in charge introduced the band to Nokie Edwards, guitarist for the band The Ventures and a Cherokee.

“We take a little break and he comes over and says, ‘Hey, gentlemen, mind if I sit in?’ He sat in with us the rest of the day and it was amazing,” Plass said.

A little later Plass was summoned to Edwards’ dressing room, where he was asked if his band would back him up for his set, which he said would include he and the band doing the surf instrumental “Pipeline” and then Nokie doing a solo of Clapton’s “Tears in Heaven.”

“I told him when we got done with ‘Pipeline,’ we’d walk off the stage,” Plass said. “He said, ‘No, you boys stay on stage.’ So we do the ‘Pipeline’ thing and they announce he will do ‘Tears in Heaven.’ He walks out in front of the Grand Ole Opry. All the lights go out except three spotlights on him. All of a sudden it hit me, ‘We’re at the Grand Ole Opry! That’s where Hank sang. That’s where Patsy Cline stood.’ I got all choked up. At the end of the night he came over and shook all of our hands and he said, ‘You young men, thank you. It’s so good to meet another band from the rez.’ That’s amazing to me.”

“To me,” Plass said, “Rumble ties all that stuff up when I watch it. Holy smokes, man, even though our little band and other little bands on reservations all over the country are not up there, we’re a part of that, and that’s what’s cool.”

A screening of Rumble: The Indians Who Rocked the World will be held Nov. 23, 6 pm at the Kress Pavilion in Egg Harbor. The screening is free and open to the public.

Richie Plass is the perfect person to introduce the Pulse presentation of Rumble: The Indians Who Rocked the World.

Plass, 67, is a musician (drummer), author, poet and first recipient of the Lifetime Achievement Award from the Indian Summer Music Awards.

He is also former co-host of the Wisconsin Public Radio show Kalihweyo’se. He lost that job in 2014, a story the Pulse covered at the time (doorcountypulse.com/too-indian-for-an-indian-radio-show).

Since 2006 he has taken to the lecture circuit with his exhibit Bittersweet Winds, which explores racism, stereotyping and growing up Indian in America.

Representatives with Join the River Coalition, the group that filed a federal lawsuit last week to stop the Back Forty Mine on the Menominee River in the Upper Peninsula, will also attend the event with information for anyone interested in that topic.