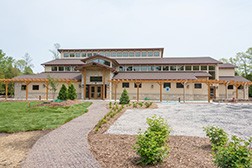 Imagine you’re standing at the intersection of Hwy. 57 and Ridges Road in Baileys Harbor. The view, as you look north, is an 81-year-old trailer park. Unbelievable? It could have, almost did happen. In 1934, the Door County Park Board approved having the area leveled for that purpose.

Emma Toft and Frank Oldenberg, a local builder, headed a delegation of Baileys Harbor people who met the bulldozer that was intent on tearing the woodlands apart, and Emma is reported to have said, “If you go any further, you will have to scoop us up, too!” (Local lore has her lying down in front of the bulldozer. Years later, Emma said the story was made up by Mertha Fulkerson, Jens Jensen’s assistant, although she allowed, had it become necessary, she might have done it.)

Almost eight decades later, the 40 acres that Toft, Oldenberg, Jensen, Olivia Traven and so many others saved has grown to more than 1,600 protected acres of the most environmentally critical lands in Door County. And the corner that might have held an aging eyesore is home to a magnificent new building, the home base of the Ridges Sanctuary.

The sanctuary was established in 1937, and until this year its headquarters was in the Upper Range Light, one of a pair built in 1869 at a cost of $6,000. It served as the lighthouse keeper’s residence for nearly a century, then as home to Roy Lukes, the Ridges’ first staff person. As an office building, the lighthouse had its charms, but it was very small, drafty in the winter, with ancient wiring that was not friendly with modern phones and computers.

Four years ago, the Ridges purchased the former Sandpiper restaurant site and embarked on a $3.5 million capital campaign to fund the new 7,000-square-foot facility that was begun last summer. In so many ways, it seems fated to be on this spot that had been its very close neighbor; when patrons stepped off the Sandpiper parking lot, they were on Ridges property. The site was already developed – very important to the Ridges so that a nature area did not have to be disturbed.

Perhaps most unique is the “full circle” story of Albert Fuller and Chester Cook.

In 1935, Fuller, curator of botany at the Milwaukee Public Museum, spent a lot of time studying the rare flora that flourished in a little parcel of land in Baileys Harbor. (He’s the one who first documented that the area contained 25 of the 40 species of orchids native to Wisconsin.) Because of his poor eyesight, Fuller did not drive, and he hired 17-year-old Chester Cook to serve as his chauffeur. Although their paths diverged in later life and Cook made his home in California, he was tremendously impressed with Fuller’s work. When he heard about plans for the new Ridges facility, 90-year-old Cook was the lead donor to the capital campaign with a $1 million gift. And thus the building’s name: The Cook-Albert Fuller Center.

The Boldt Company, a 126-year-old architectural/construction firm in Appleton, designed the facility and served as construction manager. Judy Drew, the Ridges’ assistant director, says they are extremely proud to have the first Leadership Energy and Environmental Design (LEED) commercial building in Door County. The LEED rating system is based on the number of credits accrued in five green design categories – sustainable sites, water efficiency, energy and atmosphere, materials and resources and indoor environmental quality.

Although certification won’t be finalized until the end of the year, the facility is in the high-level range for gold certification. Its “green” features include: low-flow toilets; energy-efficient lighting that is occupant sensitive, coming on when someone enters a room and going off as they leave; furniture with recycled content; repurposed items like the file cabinets that were obtained and repainted from a company that was redoing its offices; high-efficiency appliances; a geothermal system for heating and cooling; and, still to come, rain barrels.

Most people, Drew says, will be familiar with many of these green features. What will look very different to them is the parking area. “We came to this circuitously,” Drew says. “In our original design and in the capital campaign budget, we had planned for porous pavers. It was very important to us that the parking area would handle runoff and filter groundwater before it reaches the swales and Lake Michigan. But the pavers proved to be much more expensive than we’d anticipated.

“Concrete and asphalt were obviously out. Boldt brought to our attention the GeoPave Porous Pavement System manufactured in Appleton. A base is prepared, as for any other parking area, then 4’x4’ grids of recycled materials, divided into little cells, are installed. The grids are leveled, linked together and filled with gravel – lighter colored for the parking area and slightly darker for walkways. This natural appearance feels so much more like the Ridges,” Drew points out. “It blends with the building and ensures water protection, which is of primary importance. The fact that we couldn’t follow our original plan was a blessing in disguise.” 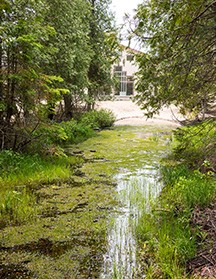 The public areas of the facility are not large, but they are very functional. They include a discovery room that features hands-on exhibits, an interpretive center/meeting space and a nature store. “The spaces were not designed to keep people indoors,” Drew says, “but to pique their interest to get out onto the trails. We are so pleased to have the opportunity to talk with people about what they should look for.” The new facility will be open year round, which Drew says is a huge plus.

As visitors come through the main entrance, they’ll pass under a unique iron lighting fixture, designed to suggest a bird’s nest. At the reception desk, created by local woodworker Kurt Wessel from fallen trees on the Ridges property, they’ll receive information about the day’s activities. In the interpretive center, they’ll learn the history of the Ridges, cultural history and geological information about the karst topography, the landscape formed from the dissolution of soluble rocks, such as limestone, dolomite and gypsum, that underlies all of Door County. There will also be exhibits about the biological diversity of this sanctuary for plants and animals, and what gives rise to it in this little pocket of land.

Looking out from the huge north windows of the interpretive center, visitors can view two of the swales that, with the namesake ridges, make the area so unique.

“We hope people will take away the fact that the 30 series of ridges and swales (or wetlands) were not created by glaciers,” Drew says, “but that they were formed over a period of 1,100 to 1,400 years by fluctuating levels of Lake Michigan. The ridges are old beachfronts. The swales that formed between them are home to the Hine’s Emerald Dragonfly, the only one protected under the Federal Endangered Species Act, and many varieties of rare wildflowers.”

Also visible from the north windows is an osprey nest perched high on a structure donated by American Transmission Company in hopes that a family of the large birds will take up residence there, rather than on one of their utility poles. No ospreys yet, but if some arrive in the next nesting season, a camera mounted near the nest will record their daily activities for viewing inside the center. The walls of a hall are lined with portraits by Jim Tyndall of Toft, Jensen, Traven, Cook, Fuller and others who played a role in the Ridges’ beginning.

Outside, many opportunities await. The sanctuary has eight inter-related rustic trails and bridges, totaling five miles, that are open year round. A new trail, Hidden Brook, leads from the new facility to the boardwalk that connects the two range lights. This trail will eventually become another boardwalk, accessible to the handicapped. The Lower Range Light on Ridges Road was restored two years ago. The Upper Range Light will be open to the public year round when an historic structure report is completed and it is restored. Both are on the National Register of Historic Places.

Two other areas away from the Ridges are part of its jurisdiction. The 170-acre Logan Creek parcel on the north end of Clark Lake in the Town of Jacksonport has more than 3,000 feet of shoreline on Clark Lake and 1,500 feet along the creek.

From the parking lot on Loritz Road, off Highway 57, hikers can access loop trails and bridges of about .8 miles each, with two overlooks on Clark Lake. This area is open year round.

The Family Discovery Trail includes 12 nature stations such as Monarchs & Milkweeds, Bone Yard, Rocks & Fossils and Woodland Homes & Lean Tos. Backpacks available at the beginning of the trail can be used for special activities at three points. Little libraries scattered along the trail invite families to sit and read for a few minutes. This area is open June through October. On the west side of Highway 57, it can be accessed in back of the Baileys Harbor fire station or from the parking lot on 57, across from Highway Q. A $5 day pass gives adults access to all the Ridges areas. Children under 18 and Ridges members hike free.

The second function of the Ridges is to educate the public in the areas of environmental protection and conservation and to serve as a model for “green” design. “Many of the design features in our new facility can be incorporated in privates homes,” Drew says. “We will also serve as a model for backyard nature activities such as bird feeders, chimney swift houses and plantings that illustrate rain gardens and butterfly gardens.”

A special event on June 17-18 will be a “green house” walk (not to be confused with a greenhouse walk) to six private residences in Baileys Harbor and Green Bay that have employed a wide variety of green practices. The tours will start at the new Ridges facility, which will also be a part of the tour. 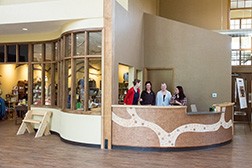 The traditional day camps for children ages 4-10 will be held in July, with an ever-evolving curriculum. Drew says that many of the participants are now the third generation of their families to attend.

The Ridges has four full-time employees, two part-time and about 150 volunteers, of whom 75 are extra-committed, almost like adjunct staff. “We could not function without them,” Drew says. Seasonal staff will be added this summer to help with programming and guided hikes.

The “soft opening” of the Cook-Albert Fuller Center will be on Saturday, June 13. Drew says the staff and board are thrilled with the new location. “The best thing about it,” she says, is that it is a focal point for the Ridges campus and unifies the rest of the areas that are part of the Ridges. Because of our visibility on Highway 57, we will have an opportunity to talk with more people and tell them about what they will see on the trails. Before, there were multiple access points, so many people hiked the trails without understanding what makes this place so special or the motivations behind its preservation.”

The take-away from all these efforts? “Somebody,” Drew says, “has to be mindful that the next generation of environmental/conservation people has to come from children who make a connection to nature. They won’t just wake up at 40 and think, ‘Oh, I want to care about the environment.’”

For the first time, the Ridges is advertising on Wisconsin Public Radio, with great feedback. “I almost drove off the road the first time I heard it,” Drew says. “It sounds so grown up!”