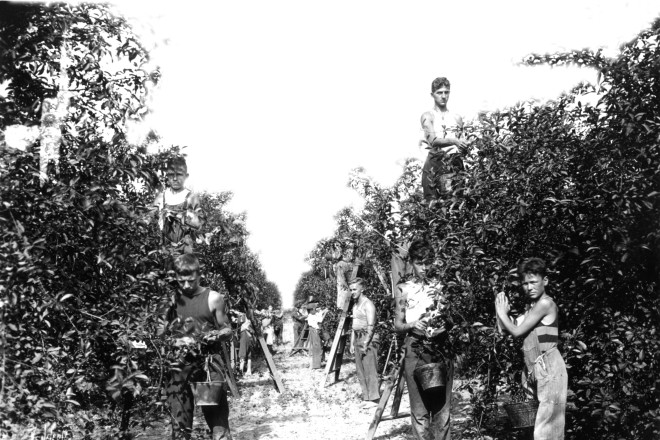 Ask almost anyone who grew up in Door County in the 1930s and ’40s if they ever picked cherries, and they’ll have stories to tell…about walking through dewy orchard grass in the early mornings, picking all day in July and August heat with cherry juice running down to their elbows, hauling their 40-pound ladder from tree to tree and lugging the nine-pound pails of cherries to the checker. And they remember this as a wonderful, happy time. 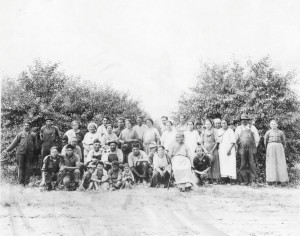 John Thenell of Sturgeon Bay, whose father Wallace managed Martin Orchards from 1938 to 1952, describes the halcyon years of Door County’s cherry industry, when carloads of tourists lined up for miles to cross the bridge on Cherry Sunday. Martin was the largest orchard in the world, with 1,260 acres of trees, accommodations for 1,450 workers and production of 250,000 pounds of cherries a day. Wallace’s advice to his young son was, “Money does grow on trees. All you have to do is harvest it.” And John did, starting at four and a half cents a pail. As a teenager, he witnessed a wedding in a 500-gallon tank of “cherry juice” in front of the old Sturgeon Bay Post Office. (Although the publicity stunt infuriated local pastors, the marriage lasted 60 years!)

Joseph Zettel, a Swiss immigrant, sold the first commercial crop of cherries in 1896. The county’s main industry prior to 1900 had been dairy cattle, but soon many farmers were planting five or ten acres of cherry trees for a second income. By the 1930s, there was a continuous sea of orchards north of Sturgeon Bay and so many employees that the Sturgeon Bay Post Office had to set up a branch in the heart of orchard count 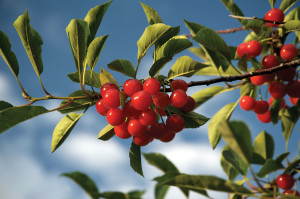 ry. By the late ’40s, Door County’s 1.1 million trees were producing 10 percent of the nation’s cherries. Nine processing plants ran all night, and many men who were then in their teens remember sleeping in their trucks as they waited in line for hours to have lugs of cherries unloaded.

At first, local pickers kept up with the harvest, but as the demand grew, newspaper ads brought in teenagers from across Wisconsin and beyond. Many of them viewed it as a cheap summer camp. Eventually, Native Americans came to help, and pickers were also recruited from the Bahamas and Jamaica. Later still, Mexicans from southern Texas came, standing up all the way in huge trucks with canvas thrown over the top.

In 1945, the harvest was saved by 2,140 German POWs, who worked alongside local pickers a 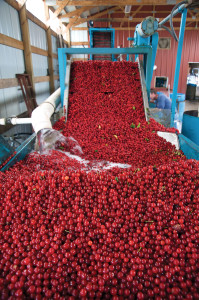 nd 1,100 other foreign workers. Although guarding the POWs was a local joke, since they weren’t eager to escape from their pleasant environment, at least one of the tall towers built in orchards for overseeing the prisoners is still standing.

“In those days,” Thenell says, “the cherry industry, with 110 migrant camps, was the economic backbone of Door County – larger than tourism, larger than dairying, larger than shipbuilding.” But those days are now just part of Door County folklore. What brought it to an end? First, the Occupational Safety and Health Administration (OSHA) declared that much of the migrant housing was sub-standard. The second major change was the switch from hand picking to automated harvesting.

The Seaquist family is now the largest cherry producer in Wisconsin, with about 1,000 acres and a processing plant that handles about 70 percent of Wisconsin’s cherries from their own orchards and those of 25 other growers. They began limb shaking in 1966. Although this replaced 60 hand pickers, it still required a crew of nine and left about 20 to 30 pounds of cherries on each tree. A few years later, growers switched to trunk shakers and canvas catchers – sort of upside down umbrellas – that can be operated by one or two people and harvest 95 percent of the fruit from 60 or more trees an hour.

But shakers are expensive, and ma 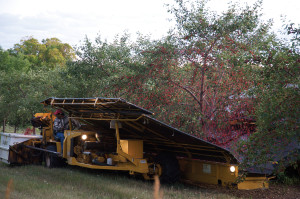 ny small growers have cut down their trees or have limited their production to “pick-your-own” – still a draw for tourists – or what they pick themselves for roadside stands. Though greatly reduced in numbers, migrant workers, mostly from south Texas, still play an important role in the harvest. Marifern and Don Hill replanted the original Falcon Orchard north of Sister Bay with 700 cherry trees when they “retired” after 37 years of farming in Iowa. Several families of Oneidas who used to pick for them return each year so their children and grandchildren can fill a few pails to see what it was like in the “old days.”

Danny Krowas’ 60 acres just west of Kangaroo Lake produce up to 350,000 pounds a year of the tart 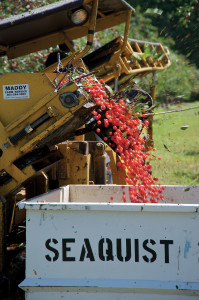 Montmorency “pie cherries” that are the prime crop in Door County. When his dad planted the original 20-acre orchard in 1956, 100 locals and Bayfield Indians were needed to harvest the crop. Today, with three times as many trees, just a few workers, including Danny’s wife, are involved.

Orchard Country, the Lautenbach’s family business in Fish Creek, turns 10,000 to 20,000 pounds of cherries a day into juice and wine. Their market, like others up and down Highway 42, features dozens of cherry products. Like most of the other markets, they also do a strong mail-order business.

Dave Schartner and his wife, Karen, took over his father’s farm in 1982 and went from dairying to cherries. Their 42 acres produce about 150,000 pounds a year. Dave was the first to recognize the impending disaster of 2008, when he found no blossoms inside the buds on branches he’d brought into the house in April to force early blooms. Karen wryly recalls that tourists who were upset to find no blooming trees to photograph assured her they’d return when the cherries ripened. “They didn’t get it,” she says. “No blossoms, no cherries.”

Jim Seaquist estimates that the 2008 harvest was less than five percent of the county’s bumper crop of 13 million pounds in 2007. It was the first total crop failure in over a century of cherry growing. Growers say the extr 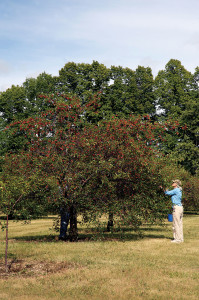 aordinary yield in 2007 stressed the trees and their fate was sealed by two years of drought and January temperatures that fluctuated overnight from 42 degrees to 15 below zero. But the unusual amount of rainfall in the summer of 2008 was the salvation of the 2009 crop, keeping trees alive and allowing buds to begin to form last June.

The future of the industry, growers agree, is bright. They all contribute to a marketing fund directed by the man behind the “Got Milk?” campaign. A major emphasis is the health benefits of tart cherries, which are 10 times more effective than aspirin in easing the pain of arthritis and are also full of the antioxidants that help prevent heart disease and cancer.

Cherry growing has always been a family business in Door County. The men who run the orchards today have hands that show evidence of the years they’ve tended their trees, and they know those trees as intimately as a shepherd knows his flock. The orchards that survive have been in the families for decades. Seaquists’ was begun by Jim’s great-grandfather in the early 1900s. Jim’s children are the fifth generation to work there.

Bob Lautenbach’s daughters, Erin and Carrie, work with him every day, and his three grandchildren – the fifth generation – are waiting their turn. “It won’t be long,” Carrie says of her six year old. “I was counting change out of a cigar box when I wasn’t much older than that.” 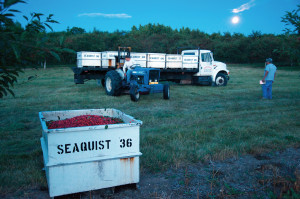 The Schartners are pinning their hopes on Jaden, their eight-year-old grandson, who was picking asparagus for the market at age two and will be the fourth generation to tend their orchard.

“Raising cherries,” Seaquist says, “is like gearing up for the Super Bowl.  You work all year for the three-week season, and when it’s over you start looking forward to next year. You’re never done.” But, as Bob Lautenbach says, “it’s a wonderful life. Who wouldn’t want to be out among the blossoms, hearing the birds sing?”