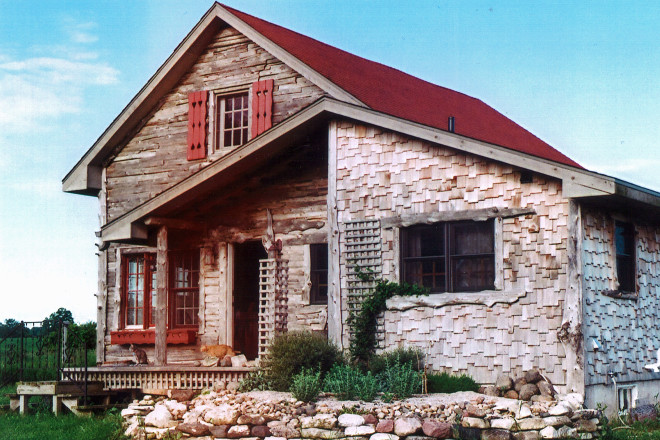 In the month of February some years ago, I placed the following ad in the Kewaunee County Star – “WANTED: Small farm outbuilding to move to my property.” 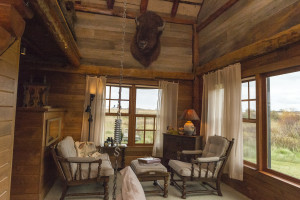 I had purchased this three-acre parcel just north of Algoma in the late 1980s. Husband Jim and I had been staying in an older mobile home that had come with the property, but now I visualized a getaway set further back from the road and something with character. After viewing scads of tumbledown shacks and various dilapidated old barns, I became more than discouraged.

Lee, a retired science teacher, lived on a beautiful farmstead approximately one mile away. Lee needed a new garage/workshop. He had an old granary that he had been planning to take down because it sat right where he wanted to build. After spotting my ad, his first reaction was, “Naw, they’d never want that old building!” But he had a special inkling and he ventured to call me. His phone message was, “I have an old granary. It is just the building you are looking for.”

“Right,” I said, disgruntled and disbelieving.

So Jim and I drove north from our home in Prairie du Sac. I squelched any hopeful expectations and prepared for another disappointment. When we pulled into Lee’s driveway, we beheld a simple structure that appeared to be intact. Lee came out of his house and we all went inside the old granary that had been his workshop. In the midst of it, I felt myself developing a relationship with this symbolic, sturdy little shelter. 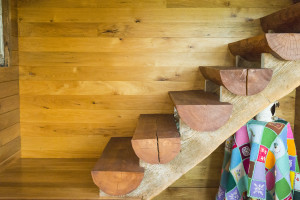 The granary was 20’ x 30’ and one-and-a-half stories high. Its interior construction had never been covered over and its post-and-beam framework was fully visible: hand-hewn, square-cut beams mortised into hefty corner posts and secured with wooden pegs. Fat roof joists of cedar and tamarack logs, some with the bark still on, crossed the space to rest atop the sidewall beams. All the hand-hewn beams, Lee told us, had been salvaged from an old barn, approximately 100 years ago. This meant that the amazing post-and-beam framework of this granary probably dated back to the first European settlers.

Jim snatched his pocketknife and started poking into everything – the posts, the beams, the ceiling joists – on the hunt for wood rot and hoping that he would fail to find it. I stood in the center of the space wanting to understand what it was that I was feeling then went upstairs feeling like a kid on a treasure hunt. I knew that we had found it. With his hands stuffed into his pockets, Lee had been watching us and then he said an incredible thing:

It was an eye-popping moment.

After returning home to Prairie du Sac, I brought out the graph paper to explore room layouts, window placement, a loft space, and thoughts as to the exterior. 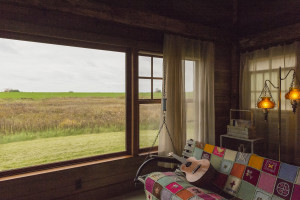 I found a company based in Wausau that had impending business in the area after the ground had dried out to move the building.

Mid-June, a curious parade made its way from Lee’s place to ours. None of us had realized the granary was only resting on its floor. Our mover worried about perching it on the flatbed trailer, that without its floor on a windy day, the granary would be “as vulnerable as a box kite!” Thankfully moving day was not a windy day. The boss and his team secured the building, delivered it, and set it in place.

The consensus by everyone – except for me – was to dig a basement and set the building on a foundation. I had wanted to do this project on a shoestring and did not want to tap into my savings. I told them, “Just set it on the ground nice and simple. The way it is at Lee’s place!” 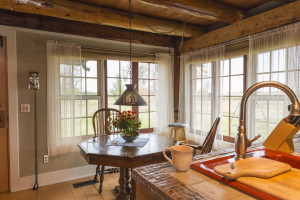 On the other hand, by having a basement, the furnace and water heater would be out of the way, there would be storage space, and if there were to be a tornado, we would open a hatch in the floor and go down below.

I had to search my soul, long and hard. I relented.

“OK. A basement. But with glass block windows and one where a person can crawl out.”

In the meantime, Lee was removing the old floorboards at his place.

For just $500, I had found a dandy 1980, red, one-ton Ford pickup truck and we brought the floorboards over. The old beat-up boards were perfect for a distressed floor in the kitchen and dining area, but needed to be scraped, laid down, sanded, then applied with two coats of primer, three coats of paint, and three coats of clear polyurethane.

Since the granary measured 20′ x 30′, in reality there was no room for a decent-sized bathroom. Out came the graph paper. With a 12′ x 20′ addition, there could be a generous bathroom plus a bedroom. We decided to go ahead with it. After the granary was lowered onto the foundation, the shed roof addition was constructed along with two porches. 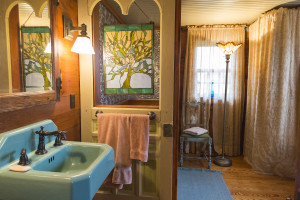 Next we removed the layers of siding down to the original wood boards and had the builder cut generous openings for windows, large expanses of glass to integrate with the beauty all around. We insulated, house-wrapped and tar-papered.

While Jim worked with the builder, I drove my truck around in search of cedar slab wood that could be salvaged for free from the portable sawmills in the area. This would be used for the exterior siding. Stacked out-of-doors during the following winter and spring and exposed to the raw elements, the bark loosened from and peeled off the slab with ease. Given the other demands, siding the granary took three summers altogether but it was so satisfying and actually fun.

As soon as the granary and the foundation were one unit, we steel-brushed, cleaned and clear-coated the interior cedar ceiling joists that ran from side-to-side, and the massive notched-and-pegged framework. With two coats of a glossy polyurethane finish, warm and vibrant tones of amber emerged from within them like magic. 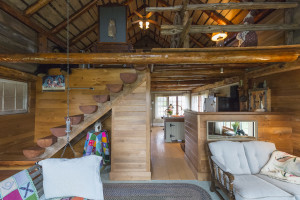 Next, we insulated between the interior studs and covered the walls with heavy plastic sheeting.

We removed two ceiling joists in the living room area to open up a nice 10-foot section of vertical space, 20 feet to the peak. We hung an old weathered porch swing at one end of the living room by using heavy chain plus two 12-inch long heavy springs. The loft space, now reduced by 10 feet, was still a generous 20′ x 20′ area with 4-foot sidewalls, the roof line ascending to 10 feet. The loft is where we can watch television at night or for guests to sleep under a cozy peaked and beamed ceiling.

The stairway to the loft is set against a butternut-paneled wall. The stair treads are 4-foot long ash logs sawn in half again, length-wise. The thick, heavy wooden side-stringers are 3″ x 8″ x 10′ pier-planks that washed up onto the shore of Sturgeon Bay after a violent storm. The old planks were waterlogged of course and we almost killed ourselves trying to lug them to the truck. We stored them in the Belgian brick schoolhouse that is also on the property (we had originally planned to restore the schoolhouse, but that is another story).

When first finding those massive planks, we had no idea as to how we might use them but they turned out to be a lucky find for this project. 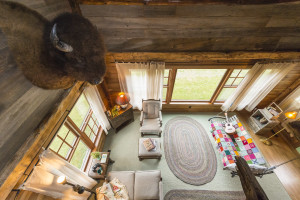 Electricity, heat and plumbing came next as well as bathroom fixtures and kitchen appliances. With heat in the building, we were able to work on the weekends during the winter months and then sleep in the warm and rustic loft under the roof.

We bought some beautiful weathered barn board for $250 and Jim paneled the entire upper-half of the granary with it, laying the boards horizontally and fitting them meticulously by scribing against the post-and-beam framework. From a local sawmill we had purchased native woods of butternut, black walnut, white ash, white cedar and aspen. We installed the walnut horizontally in the living room and the same with the butternut on the interior walls that wrap around. Because of a disease going through the Wisconsin butternut trees, we were happy to get some for posterity’s sake. We painted the aspen wood pantry a light taupe, the kitchen and dining area a warm cream, and the old plank floor a soft pumpkin color. 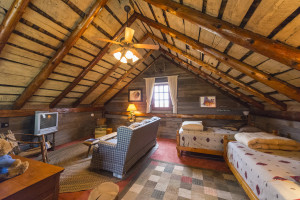 When removing the exterior siding, we had quite a surprise. Beneath it, the granary was covered with 2′ x 4′ metal panels intended to keep the mice from coming in and feasting on grain. Some of the panels were embossed with a brick pattern, so charming for wall covering in the kitchen/dining area. It was very difficult trying to work with these “charming” metal panels. It involved cutting them to match the brick pattern and to fit around wall plugs, light switches and window openings.

We used a cement board prep-material in the tub enclosure and paneled this with a vinyl product that looks like old tin ceiling. We drywalled where I would wallpaper above painted wainscoting in the bedroom. The ceilings in the addition are tongue-and-groove painted aspen, the same in the pantry. Aspen wood is inexpensive, takes paint beautifully, and is without knots that bleed through.

One of our like-minded friends gave us a heavy door with a beveled glass window that he found in some reconstruction debris on the University of Wisconsin – Madison campus. Painted red, it is the 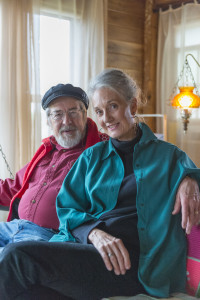 front door and opens into the kitchen. For $25, I rescued some folksy shutters and window boxes from a cheese store, soon to be demolished in our hometown of Prairie du Sac. They flank two sets of old windows at the southeast corner of the granary. These old-timey shutter-style windows had been propped against a tree at a nearby farm, along with a sign that said, “Take us.”

Jim and I were just two wacky people on a mission but we started with an idea, a vision, and the adventure of doing it. We moved from one thing to the next thing and didn’t look back. We like the idea of caring for a historic schoolhouse with its own story and a granary with a past. We’ve come to call our patch of land The Ahnapee Menagerie.