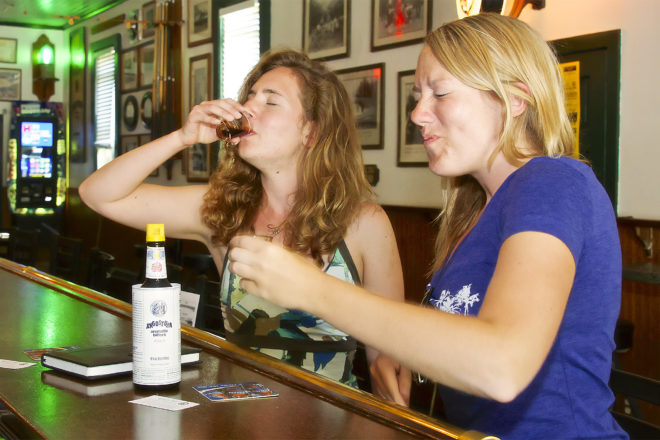 Carol Thompson and Sally Slattery get their Bitters face on at Nelsen’s Hall. Photo by Len Villano

Ask for a shot of bitters anywhere but Door County and you may be met with a queer expression. ‘Excuse me?’ the bartender might ask, trying to shake an ounce of the deep red liquid from the plastic dropper top. “They look at you like you are crazy,” says Robin Ditello, owner of Nelsen’s Hall Bitters Pub & Restaurant on Washington Island.

She and her staff remove those plastic tops and pour shot after shot of bitters on a daily basis. In fact, Nelsen’s Hall is the largest purveyor of Angostura Bitters in the world, according to the Guinness Book of Records.

Why are they famous for serving up a shot that makes many cringe? The answer dates back to Prohibition, when the United States (quite unsuccessfully) banned the sale, production, and transportation of alcohol from 1920 – 1933. Tom Nelsen, a Danish immigrant, built the hall in 1899 and wasn’t about to close his doors. He applied for and was granted a pharmacist license to dispense bitters as a “stomach tonic for medicinal purposes.” Since Angostura Bitters is 90 proof, it’s safe to say that it served as more than a cure for stomachaches. 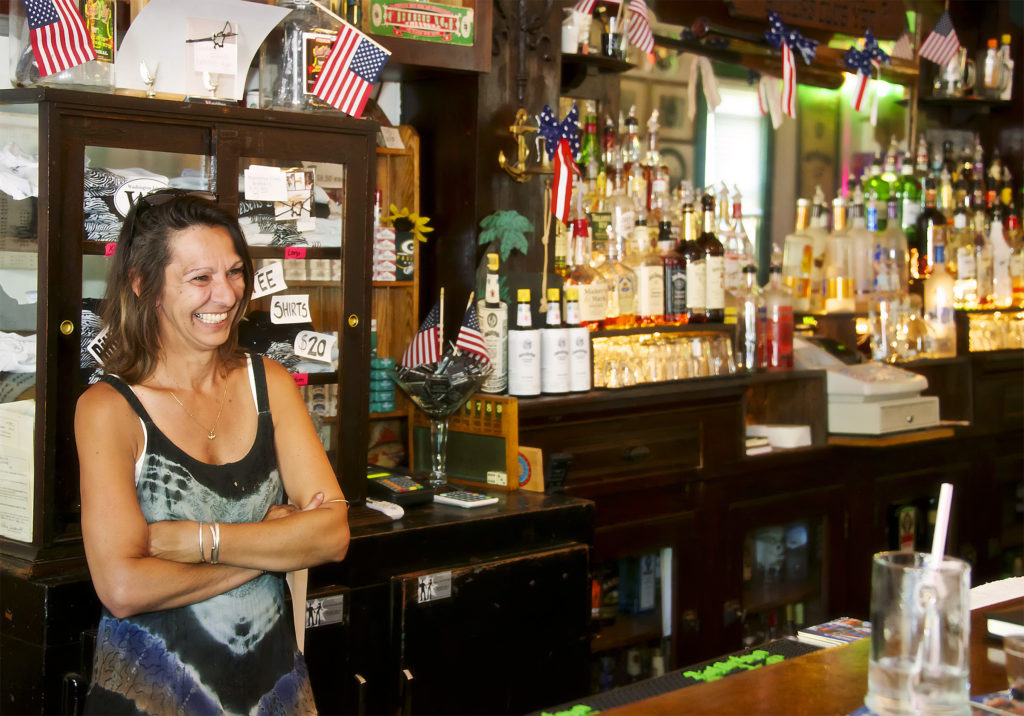 Owner Robin Ditello gets a kick out of the faces that accompany new members of the Bitters Club. Photo by Len Villano

The hall remained open during Prohibition, making Nelsen’s the oldest legally continuously operated tavern in the state of Wisconsin. The tavern also served as a movie theater, dentist office, ice cream parlor, and of course, pharmacy.

“I’ve cured hundreds of hiccups,” says Ditello, referring to one of the many medicinal powers of a little shot of bitters. Another power of the drink – originally concocted by a German physician to combat sailors’ seasickness – seems to be a long life. “Tom Nelsen drank a pint a day – that’s 16 shots,” says Ditello. “He lived until he was 90.”

Nelsen’s spirit is also rumored to linger in the hall. “Doors shut when they shouldn’t, I hear steps up the stairs – nothing violent,” says Ditello. “I feel a presence, an energy – I think he’s letting me know I’m doing a good job.”

Carol Thompson and I bellied up to the historic Nelsen’s bar to down a shot of bitters, becoming official members of the Bitter’s Club. We exhaled, said a ‘Cheers’ to Robin and one another before tipping our heads back and swallowing the “tonic.” Whooo! That’s some strong stuff that should probably be followed with a chaser of some sort – beer, soda, water.

Robin stamped our Bitter’s Club Certificates (handed out to over 10,000 visitors a year). I am now officially “considered a full-fledged Islander and entitled to mingle, dance, etc. with all the other Islanders.” Perhaps I’ll one day mingle and dance with the ghost of Tom Nelsen – if I take enough shots of bitters.