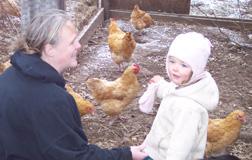 Anna and Mellen Knapp play with some of their chickens.

“People ask us, ‘Do you miss Alaska?’” Patrick Knapp said. “But the first time I saw Mellen running with the goats and dogs, I knew we had made the right decision.”

After living nine years in Anchorage, Patrick and Anna Grasse Knapp decided to move to the Grasse family farm in Ellison Bay with their daughter. “We wanted to be as self-sufficient and independent as we can be,” Patrick said.

“We learned about subsistence lifestyles in Alaska,” Anna said, “the idea of producing your own food. A way of life we could pass on to Mellen.”

Anna was born to Jim and Iva Grasse, attended Gibraltar Schools and graduated from Carthage College in Kenosha where she met her husband Patrick Knapp, both English majors. After Anna taught English at Bowler High School (Wisconsin), she and Patrick moved to Alaska where she taught while earning a degree in school administration that led to a position in staff development.

Patrick worked for the Cook Inlet Tribal Council conducting outdoor education with students and in the school system as a family advocate, a liaison between Alaskan Native families and the Anchorage Schools.

A sense of adventure brought the couple to Alaska. “We liked the outdoors,” Anna said. “A place where you wouldn’t run out of outdoor options,” Patrick added.

“We could hike out into the mountains and camp,” Anna said.

“I helped a woman with her dogs,” Patrick said. “She ran the Iditarod, and for my help, she taught me to run dogs with a sled.”

The woman became so important in the lives of the Knapps that after she passed away they named their two-year-old daughter after her.

The couple’s decision to return to Door County “was not a simple one,” Anna said. They had become interested in sustainable agriculture, but were living in a city with a short growing season. “We were making our own cheese and Pat roasted his coffee, little things that supported our household, but we couldn’t do it easily in Alaska. At the same time we were growing our family where we didn’t have family.”

“We were done living in a city,” Patrick added, “and wanted to move to a smaller community.” 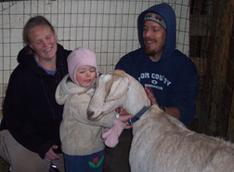 Anna, Mellen, and Patrick Knapp pet one of their dairy goats.

“After being away from the farm so long,” Anna said, “it calls you back.”

“And we had been working to the point where we hardly saw each other,” Patrick said. “We had to put Mellen in a daycare. And we like each other!”

The young family is now living on the family farm with her parents, Jim and Iva Grasse. “We couldn’t have done it without their help,” Patrick said. “They have been really good friends with this.”

“They’ve done so much for us,” Anna added, “helping us get the farm going.”

Anna and Patrick care for three donkeys, nine dairy goats, and about 25 laying hens, along with two dogs they brought from Alaska. This summer they tended a 180-foot square garden, producing mostly corn, onions, and potatoes, but including a variety of other vegetables as well.

Excess produce they sold from a roadside stand, but next year they may experiment with Community Supported Agriculture that includes a delivery system, Anna said. But she is not looking to compete with existing businesses.

Two of the goats are currently producing milk, as will the others when they reach full maturity. “We’re still learning,” Patrick said, explaining that they make mozzarella, cottage cheese, ricotta, and yogurt from the goat milk. “Mellen loves goats’ milk,” he added, “and likes to go out with us to help with the goats.”

While self-sufficiency is their goal, at this point they are uncertain as to the path their life might take. “I will do odd jobs,” Patrick said, “painting, working construction.”

“I will keep up my teaching certification,” Anna said, “but at this time I’m not interested in going back into education. I may tutor or have a small daycare.”

“We want to move into a lifestyle where we work selectively,” Patrick explained, “and focus on a sustainable way of living. We could focus on making cheese, or CSA with vegetables; we could go in a lot of different directions.”

Jim Grasse, who owns EB Construction, suggested that the couple put an ad in a newspaper looking for a house to move. The Knapp’s ad appeared in the Pulse on a Friday, and on Sunday, they received a call that the Bethel Baptist Church had an old parsonage for them. Jim Grasse pronounced the construction sound and the new foundation on the farm has now been poured.

“Hopefully the house will be moved here within the next two weeks,” Anna said.

“Luckily we don’t have anything else [going] on!” Patrick joked.

The couple is expecting the birth of their second child at the same time, the middle of November.*

Many people dream of a simpler and greener life than the one they are living. But only a few, like Henry David Thoreau, actually try the experiment. Henry, along with Patrick and Anna Knapp.