There’s nothing like the rush of pulling on your goggles and diving into the water. As a high school swimmer I thought that training and executing the 200-meter Individual Medley (50 yards of fly, backstroke, breaststroke, and freestyle) was a stiff challenge, but Margaret Carroll has made me think otherwise. 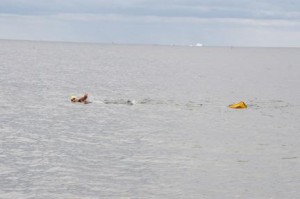 Margaret Carroll swims amongst boats, kayakers, and jet-skis in her solitary quest to circumnavigate the peninsula this summer.

Carroll is swimming the 110 miles around the Door County Peninsula, from Sturgeon Bay to Sturgeon Bay. She’s doing it in increments, of course, going up the Green Bay shoreline, through Death’s Door, and back down the lake side. She started the swim in June when water temperatures were still in the 50s. Surviving and continuing to swim in such cold water isn’t easy. Carroll follows English Channel rules, meaning she cannot hold onto or accept help from boats or people. Swimming in two to five mile increments, Carroll is meticulous about starting exactly where she left off. The only English Channel rule she breaks is wearing a wet suit.

When I interviewed Carroll at Northeastern Wisconsin Technical College’s Sturgeon Bay campus, where she works as the librarian, she was adamant about one point:  “I am not doing this as a competition,” she said. “It’s something that I am doing alone, but everyone is alone. Whatever sport you do, whatever you do in your job, whatever challenge you have, we’re all alone.”

Though she may be alone in the water, Carroll has the support of friends. She is a member of the Door County Silent Sports Alliance and receives encouragement and support from its members, like Dale Krolick of Sister Bay.

Her mother, on the other hand, has a different take.

“My mom does not want to hear about this,” Carroll said. “My mom is 80 years old, and I told her about it; and she thinks that I’m kind of goofy.”

She takes the concerns of her mother and her friends to heart and tries to remain as safe as possible. She agreed to this interview in part so people on the water will know she’s out there churning through the waves.

Her biggest threats are boaters and jet skis, so to stay visible she wears a red float tied to her ankle. When boat traffic is heavy she even has to stand up and raise her arms to be seen. In places such as Fish Creek and Ephraim, Carroll is trying to take a kayaker with her at all times to make herself more visible. Carroll also depends on the locals, who she considers the experts, for advice on when to swim. Along with consulting, she checks the wind, weather, and temperature of the water on a daily basis. 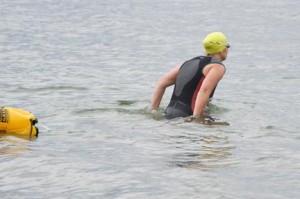 An avid kayaker, Krolick knows the risks that every person takes upon entering the water.

“You take assumed risk; anytime you enter the water you take the risk,” Krolick said. “…the biggest risk would be boaters that don’t know the water, and I don’t know how you would prepare for that besides being as visible as possible, and I think Margaret is as prepared as humanly possible.”

Margaret invites other experienced open water swimmers along with kayakers to go with her. However, at some points she feels like she would worry more about the safety of the other person swimming. This is a risk that she firmly believes she is taking on alone, and would hate for it to be someone else’s as well.

“I lived up in the UP in Lake Superior, I have a healthy respect for the Great Lakes,” Carroll said. “I don’t want to be a statistic in the paper; I want to be safe, and sometimes there is just a fine line between being confident and being reckless.”

Before she leaves her house for a leg of her swim, Carroll leaves a note saying where she is swimming and where her car will be parked. She then drops off her bike at the end of her swim. Not only does it provide incentive to continue swimming, it also allows her to bike back to her car, which she parks where she started.

A lifetime of experience helps Carroll take on the challenge without fear. She has been swimming competitively since age seven. She went to the state competition all four years of high school and continued to swim at St. Mary’s College in Notre Dame, Ind.

She majored in English at St. Mary’s and has since moved around, teaching and coaching swimming. Carroll even swam in Japan, when she was teaching English abroad.

Recently she has busied herself doing open water swimming in triathlons, and this year her team took 3rd place in the All-Female Division of the Half Ironman Relay as part of the Door County Triathlon.

Switching from sprints in high school to long distance open water swimming at age 49 is a tough transition. While she continues to train in the pool throughout the winter, Carroll prefers to swim in open water in the summer. It is a good alteration from the monotony of lap swimming.

The training for open water swimming and pool swimming is hugely different. Guy Gniotczynski, swim coach at Carthage College, said “Training would involve a mixture of in pool and open water training, concentrating on endurance, waves, and wakes.”

Carroll hopes to continue training to swim in the Bayfield to Madeline Island two-mile swim in Lake Superior this August. However, that depends on when she finishes her own Door County challenge.

“I hope that when I finish my swim I’m stronger, both physically and emotionally and able to handle other challenges in my life,” Carroll said.

She hopes to finish circumnavigating the Door Peninsula by the end of the summer.

“If not,” she said, “I’ll try to remember Ghandi’s words:  Success is not always the attainment of the goal, but the effort itself.”