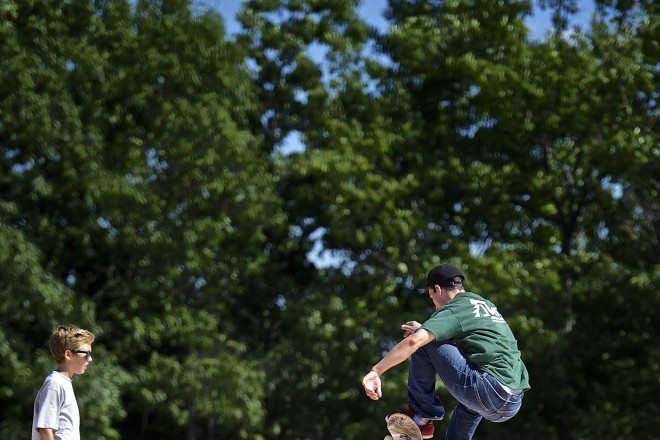 Born on the sidewalks of California in the late 1940s by surfers looking for something to do when the waves were flat (according to Skateboarding Magazine), skateboarding has cruised its way into the mainstream sports category alongside basketball, baseball and football. 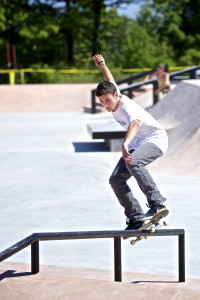 For the first few decades, its popularity ebbed and flowed, largely driven by the fact that some saw it as a dangerous and passing fad. But with those concerns emerged a more significant trait of the sport: determination.

As its history shows, early skaters of the movement went to great lengths to remove obstacles of the sport, be they real or perceived. They were determined to grow its population by switching from clay wheels to urethane in 1972 (removing the largest risk factor) and introducing contests to already-established festivals such as the slalom and freestyle contest at Ocean Festival in Del Mar, California, in 1975 to show people what skateboarding was capable of.

Skateboarding companies were started, tricks were invented (with a special shoutout to Alan “Ollie” Gelfand, who invented the “Ollie,” a revolutionary trick wherein he soared through the air with his board seemingly glued to his feet), and when public skateparks became cost-prohibitive because of high insurance rates, those skaters took to their backyards, driveways and the streets to progress their passion.

For every obstacle, skaters seemed to have an answer.

It would be a new technological advancement, the Video Home System (VHS), that gave skateboarding its final push into the mainstream. In 1978, mechanical engineer George Powell teamed up with professional skateboarder Stacy Peralta to create and market skateboard products through their company Powell Peralta. When VHS was invented, Powell and Peralta’s Bones Brigade, a team of top skateboarding competitors, started recording skateboarding videos that found their way into living rooms across the world.

And then, in 1995, ESPN hosted its first ever X-Games with skateboarding at the helm. The sport hasn’t looked back since.

As quickly as skateboarding found its footing in the 1990s, it became more than a sport – it became a culture.

In Door County, that culture is perhaps best represented by the Sturgeon Bay Skatepark Initiative (SBSI), a group of dedicated skateboarding enthusiasts and business owners who partnered with the City of Sturgeon Bay to build a professionally designed skatepark on the city’s West Side.

It was a three-and-a-half year process, from city council approval to the skatepark’s opening in September 2014, and one that showed the residents of Door County that this fast-growing sport has a strong following here among people of all ages. 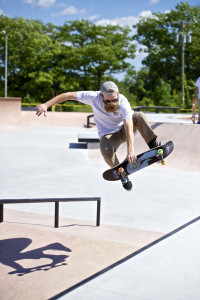 On this cool and foggy spring night at the skatepark, nothing could be more clear. While three young men played catch with a baseball on the grass next to the park, at least two-dozen skaters, males and females of all ages and backgrounds, dipped into the bowl, grinded on rails, and talked to me about their love for what was, not too long ago, considered an underground sport.

Their stories, backgrounds and goals are as varied as the art adorning their skateboard decks: some were introduced to skateboarding around the time they learned to walk and others, maybe around the time they bought their first house. Some are working on landing an Ollie and others, like six-year-old Siri Fittshur, decked out in hot pink shoes and rocking an alphabet-covered skateboard, want to learn how to ride, “but no tricks.”

Skateboarding is a two-layer sport: driven by individual determination within a community setting. You set your own goals and your own timeline, but if you are struggling to land a trick, there is a good chance you’ll hear some tips from someone who already has. Practice doesn’t begin at 3:15 pm and if you aren’t good at it from the get-go, you are not going to be cut from the team.

“When they talk about why they love skateboarding, it’s that no coach is telling you you have to be here for this practice or you have to do it their way or you have to sit on the bench while someone better gets to play,” said SBSI co-chair Laurel Hauser. “Really it’s an individual sport but they all help each other out.”

Another benefit? Skateboarding is a fairly inexpensive sport to get into. Once you get set up with a complete skateboard and purchase a sturdy pair of skate shoes – some of the kids recommend suede for its durability – you are ready to go.

For Draeden Goettelman-Hodges, 14, the first step to learning to skateboard is “being able to get yourself around and getting comfortable riding the board.” It may not be easy at first and you’ll take your fair share of spills, but once you land your first trick (the Ollie), everything comes naturally after that.

“At the beginning, you take a lot of falls learning,” said Jack Frank, 17. “But when you start to get past that, it gets a little easier and you start to get the hang of it. It’s a lot of time and dedication, then you get pretty good.

“It’s your individual motivation that allows you to get better,” Frank added. “It’s very creative. I don’t have a schedule to skateboard but since it’s such a passionate thing, I go out every day to get better and better. I think that’s what’s kind of nice – you can do however much you want and it’s your own thing.”

You can also use skateboarding however it best suits you, as a recreational activity, an art form, a job, or a method of transportation. No matter how it is viewed, the athletic component is one that Matt Dixner Young, co-chair of SBSI who came to skateboarding at the age of 32, said can’t be beat. 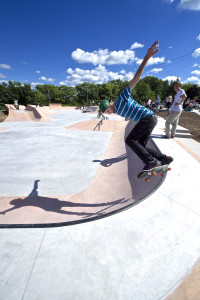 “There is an intensity in skateboarding that you can’t find anywhere,” he said. “You’re pedal-pushing yourself, you’re moving yourself around the park. It’s an adrenaline rush that nothing else comes close to. It keeps you coming back.”

Dixner Young also points out that since the skatepark opened last fall, it has enjoyed visits from people from all across Wisconsin and the Midwest in what he called “skateboard tourism.” Since the sport has only in the past decade enjoyed a surge in popularity, skateparks are not necessarily part of every community’s growth plan so when skaters hear of a new one, they make a point to visit it.

Call it another way of showing their determination.

“Something I want people who don’t know anything about skateboarders to know is that they are determined,” Dixner Young said. “When they set their mind to doing something, they will do it. It may take them a long time but they’ll get to it.”