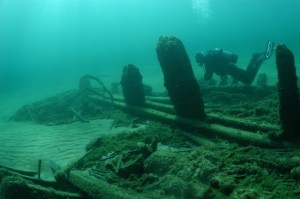 Door County is surrounded by water. It’s integral to our weather, recreation and economy – and it’s a big part of our history.

That’s why two maritime archaeologists from the Wisconsin Historical Society recently dove beneath the waves near Whitefish Dunes State Park to explore the Australasia, a ship that sank in 1896.

“It really is a time capsule,” said Tamara Thomsen, maritime archaeologist with the Wisconsin Historical Society. “There aren’t a lot of divers who have dived it, so not a lot of things have inappropriately been moved.”

Thomsen and Keith Meverden, the other maritime archaeologist, led a team of volunteer divers to survey the Australasia June 22 through 25. They’ll use their photographs and notes from the dive to create a map of the wreck and learn more about the technology of the times. 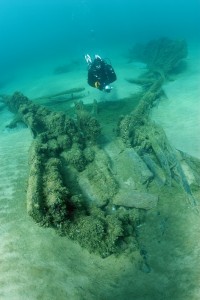 A diver examines the stem of the ship where the propeller shaft once lay in this U-shaped timber, called the “shaft log.” Photo courtesy of Tamara Thomsen, Wisconsin HIstorical Society

The Australasia was built by James Davidson, a shipbuilder known for building gargantuan wooden ships when everyone else had progressed to building with steel. Thomsen said that’s because he owned forests of huge oak trees when others had been depleted, and owned the mills that readied the wood for shipbuilding.

But on Oct. 17, 1896 on a trip carrying coal from Manitowoc to Cleveland, Ohio, the big steamer caught fire outside of Baileys Harbor, according to research done by Ginny Haen, former park naturalist at Whitefish Dunes State Park.

Instead of fighting the fire, the Australasia crew abandoned their dinner and the ship and rowed in lifeboats toward shore. Two hours later the tug Leathem carried other men out to examine the ship. The Leathem crew ate the abandoned dinner before they inspected the fire damage.

The Leathem captain turned the ship toward Whitefish Bay to get the ship as close to shore as possible. The ship headed on, ablaze, and sunk when it struck bottom less than 700 feet from shore.

Some of the wreckage was recovered, and much was forgotten until five years ago, when two jet skiers spotted it beneath the surface.

The Australasia wreckage hasn’t been surveyed before. Although Thomsen and Meverden have dived and studied many shipwrecks in the past, the Australasia stands out for one reason: its size.

“Everything about it is big,” Thomsen said. “It’s mammoth – three football fields worth of wreckage.” 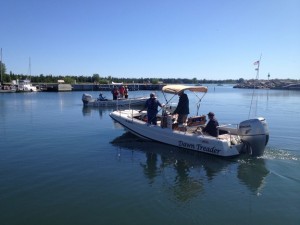 Volunteer divers and maritime archaeologists left from the Baileys Harbor boat launch on June 22 to map the wreck.

The ship was carrying 2,200 tons of coal when it sank.

When Thomsen and Meverden are finished surveying the wreck, they’ll help the Wisconsin Sea Grant and Whitefish Dunes State Park create a display for the park’s nature center. There’s already a screen showing video of the wreck in the nature center, which can be updated as research progresses. Thomsen said they also plan to have a to-scale model of the ship mounted on the wall.

Learning about shipwrecks like the Australasia changes the way people think about water, Meverden said. Instead of thinking of it as something to drive around, they’ll remember that it was once the Midwestern highway.

“We do this to remind people what water really is, what it can be and what it was,” Meverden said. 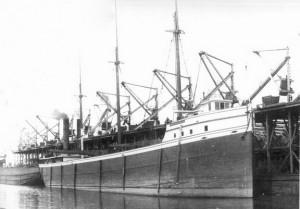 At 282 feet in length, the ship was a gargantuan vessel and dwarfed nearly all other wooden ships of her time. Photo courtesy of the Wisconsin Historical Society.

Thomsen and Meverden will work on the Australasia for the rest of this year, and next summer plan to tackle the remains of the Adriatic, another of Davidson’s ships. The Adriatic lies near the shipyard in Sturgeon Bay and takes up dock space.

Thomsen and Meverden will survey the ship and see if it could be moved to make room for more docking, without hurting the wreck’s cultural and historical significance.

Because the Australasia wreck is so close to shore, park visitors can snorkel and dive through the site, but Carolyn Rock, natural resources educator at Whitefish Dunes State Park, warns not to move or steal anything from the site.

The park already celebrates ships lost in the bay. Wisconsin Sea Grant funded an educational sign for the wreckage of the Ocean Wave ship. Pieces of shipwrecks that have washed ashore are also displayed.

“That’s another thing about the park, not everything is on the land,” Rock said. “We are definitely a water-based community. There’s always a story behind each wreck, even under each rock here.”

To see videos of the dive, go to the Wisconsin Sea Grant Youtube channel: http://www.youtube.com/user/UWASC