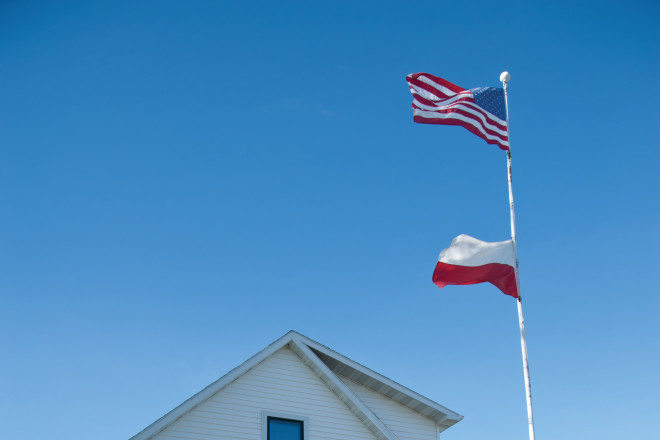 In 2003, Robert and Trish Kubala were a typical couple:  newly married, expecting their first child, and looking for a home to raise their family. What happened as a result of that search, however, was anything but typical.

Robert and Trish were not looking for a standard, turn-key starter home. They were looking for a project – which is just what they found when they purchased the George Loritz VFW Post 9290, also known as the old VFW hall, on the corner of Maple Grove Road East and County Highway F. 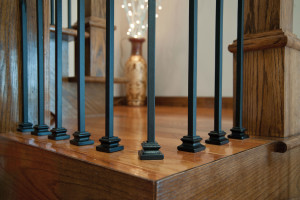 Built in 1903, the structure had once been the Maple Grove School District 4 Schoolhouse and, interestingly, had once counted Trish’s grandmother, Julia Williams Peil, among its students. Robert and Trish pieced together the building’s history through stories and photos, looking to their neighbor Jerry Reinhard (the original “Jerry” of Jerry’s Flowers), who had also once been a student, as well as to other previous students and VFW members to fill in the blanks.

When they bought the building, it was characteristic of many VFW halls of its kind, with a large room with dark paneled walls and a utilitarian kitchen and bathroom. So, Trish and Robert developed a vision for the property and embarked on a five-year journey to transform a blank canvas, relatively speaking, into a work of art.

The couple started the project by taking most of the rooms down to the studs. They also removed the drop-tile ceiling, revealing the original 11-foot-high ceilings, now one of the most dramatic aspects of the house; the height accentuates the natu 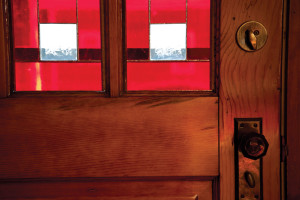 ral light, allowed in from a large expanse of windows.

In looking through old photos, Robert and Trish noticed that there had been a brick chimney on what used to be an exterior wall. In an effort to preserve this historical detail, they chipped away at all of the layers of plaster. Trish then found a beautiful, antique cook stove which they attached to the chimney.

The main floor has an open plan for the living, dining and kitchen areas. The original kitchen stretched the length of the building, but the Kubalas wisely used part of the space to add a large, main floor bathroom. Another separate room on the main floor is set up as a guest room.

One noticeable feature of the main floor is, well, the floor. “[It] tells a story,” Trish says. The floorboards have a lovely, honey-colored patina that is darker in some areas and lighter in others. In some places the planks are a different size or are inlaid in haphazard form. Trish points out an area in the dining roo 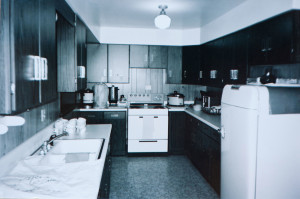 m that has dozens of lines of dark dots. “These are the actual nail holes from the desks of the original schoolhouse,” she explains.

In the kitchen, meanwhile, you can see dark rings from the coal buckets that were once hauled up through what used to be the stairway down to the basement, back when coal stoves heated the building.

When the Kubalas first moved in, heat was an issue. Because they lived in their home all throughout their construction – and Trish was due with the couple’s child – they had great motivation to keep the project moving forward. “There was only one vent that put out heat,” says Robert. Today, the main room has in-floor, radiant heating which “we also put in ourselves,” says Trish in a tone that suggests it may not have been the easiest part of the project. Between the cook stove and the in-floor heat, the home now stays cozy all winter long. 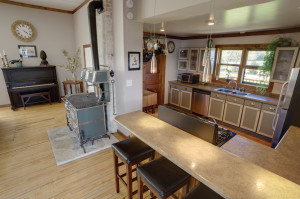 Like the in-floor heat, some things were trial and error along the way, but what they didn’t know they learned quickly using common sense. “My father was a carpenter as well as my grandfather,” Trish says. “I learned a lot growing up in my family.” As for Robert she explains, “He’s very smart, very precise and good at just about everything.”

The impressive staircase which Robert built is proof of such ability. It fits beautifully in the corner of the room and looks like it has always been a part of the house. The darkly stained oak wood also provides a nice contrast to the lightness of the rest of the flooring.

The stairase leads to a second story that the Kubalas decided to add after some deliberation. Although they wanted to keep the integrity and history of the building intact, Robert and Trish also realized that there would not be enough room for their family of three. For that part of the project they hired professional contractors; prior to that point, the work done in the house was, quite literally, the couple’s blood, sweat and tears. “There was plenty of each!” laughs Robert. 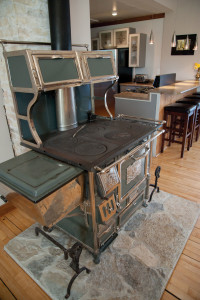 The second story of the home was completed in 2008 and features two bedrooms and bathroom off a long hallway amply lit by multiple skylights. Daughter Kiki’s room is “all girl,” with pink walls and a large walk-in closet. The master bedroom is large and calming with a pair of windows above the bed in place of a headboard. “At night we can look out and see the stars,” says Trish.

Outside there is still the original girl’s outhouse (the boys’ burned down long ago) that currently serves as a shed. The Kubalas also added a two-car garage that they use as a workshop for their new business venture, The Anvil blacksmithing, where Trish designs and Robert creates the pieces that are for sale at many local art shows and can be commissioned.

It is obvious in the attention to detail what a meaningful project this has been for Robert and Trish (and Kiki) – this atypical home is evidence of not only their affection for the property’s history, but also their uncommon ability to bring a vision to reality.