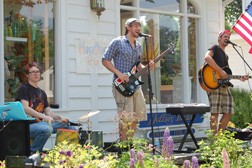 You would not expect to hear the Christmas song favorite “Feliz Navidad” in the middle of a hot July day, but when my two high school friends and I decided to give street performing a shot, we quickly used up all of our other options. It started with a unique but simple bet. Who could make more money street performing? Between two guitarists and a drummer, it was impossible to predict who would come out with an overflowing tip jar. Luckily, we decided to join our talents before the competition went underway. The Hunga Dunga Trio was created.

After expanding our set list to allow for a better fallback song than “Feliz Navidad,” we drove through Chicago-land looking for any opportunity to play. Often times this meant places where live music was not planned or expected such as local farmers markets, indoor malls and movie theater queues. Our act was still steeped in the roots of street performance with two acoustic guitars and a set of buckets from the hardware store as a drum set. This allowed for a quick setup time, giving us the chance to burn through several songs before the area’s security guard guided us out.

The goal was to attract the biggest crowd we could as early as possible. When there are dozens of people circling with camera phones and smiles, it makes it harder for a security guard to lay down the law, in turn keeping the tip jar open for just a few minutes longer. A good day meant a 15-minute performance and a picture with an amused spectator.

In the summers when I was living in Door County, I would continue going to Founder’s Square in Fish Creek with an acoustic guitar and set of harmonicas. Although I didn’t have a band with me, street performing alone was a unique experience.

Before long, I was asked if I would be able to play an hour at Malibu Moo’s Frozen Griddle in Fish Creek for the Fourth of July in 2010. I called on my street-performing band and we managed to turn our 15-minute set into an hour. More importantly, we managed to bring in a significant profit in tips. This unexpected success changed the game, and we had to think seriously about our potential playing music.

Through various one-off performances and street performance (especially around the winter holiday season), we wrangled up enough money to buy an amplification system, which would allow for one guitarist to play bass as well as using microphones for vocals. Yet, given our street performing roots, we also bought a car battery and converter, giving us the capability to play wherever we felt like playing, regardless of how far the nearest electrical outlet was.

This summer, our trio is living in Fish Creek together, giving us more time to expand the set list, practice, and land gigs throughout the county. Despite our evolution to playing various bars and getting paid for our efforts, we never underestimate the power of a stripped 20-minute street performance, which has led to some of our most anticipated events including a wedding in late June.

In the end, we are still three odd musicians who continue to use hardware store buckets as drums, continue to use a name from a favorite childhood television show and will always prefer a 15-minute set and security escort over a formal gig. All we ever wanted to do was play music. Street performing opened that door for us and we stepped through to a summer booked with more shows than we could have ever imagined.

The Hunga Dunga Trio performs every Friday night at Peninsula Pub, located on County Road A between Egg Harbor and Baileys Harbor, and throughout the peninsula. For more information visit their Facebook page or call Jackson Parr at 630.450.4414.