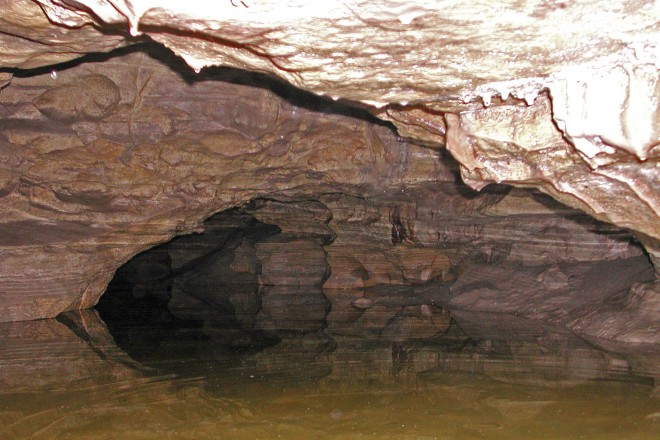 A large opening in the caves. Photo by Roger Kuhns.

We often think of the earth we walk upon as solid and unchanging. Nothing could be further from the

truth in Door County. Caves, sinkholes, open joints and fractures are everywhere in the carbonate rocks of the Door Peninsula. Bedrock here is known as the Silurian-aged Niagara Dolomite. Born from warm sub-equatorial waters 425 million years ago, it is the stuff of coral reefs and pristine expansive beaches much like what we find today in the Caribbean or Great Barrier Ree£ Water, time, and watersoluble dolomite are all part of an interesting equation whose solution has yielded holes in the rock.

In a state known for its cheese, it may not come as much of a surprise that geologists, hydrologists and cavers draw an analogy to what is under foot. The Door Peninsula bedrock is so full of holes that it is often likened to Swiss cheese. The rocks are so full of holes that those outcropping along the Niagara Escarpment on the west side of the peninsula sometimes whistle when the wind blows.

Caves are the underground natural plumbing of the county, and they come in all sizes. Some, such as Horseshoe Bay Cave or Paradise Pit Cave, are large enough to walk or crawl through. Most holes in the rock, though, are too small to fit people, but plenty big for ground water flow. Caves, open joints and fractures connect the surface water with the ground water systems in the county. Sinkholes can be seen throughout the county and represent surface depressions created when a cave ceiling collapses and reaches the surface. This process forms the natural entrances to many caves. It also means that what you pour into a sinkhole may show up in your sink later that day!

There are three types of caves in the Door Peninsula: solution caves, the so-called “sea caves,” and fault-generated caves. All form along the dominantly northeast and southeast oriented joint structures that have developed in the Niagara Dolomite.

The solution caves are the most common. One of the best examples is Horseshoe Bay Cave south of Egg Harbor. The cave is privately owned and its entrance is steel gated, but cavers such as Bob Bultman from the Wisconsin Speleological Society and other lucky visitors on occasion get to crawl under the county through more than a half-mile of passages in what may be Wisconsin’s longest cave. Horseshoe Bay Cave is wet and muddy, so much so that one section is called the Mississippi River. Portions of the cave in fact do represent an underground river (Fig. 1), and sometimes during spring runoff the ground water flows in torrents and issues forth from the mouth of the cave. The cave shows features of this ground water flow through the water sculpted walls and pothole-like geometry of some of the rooms (Fig. 2). The rooms and galleries in the cave also display modest dripstone cave formations, such as stalactites, stalagmites and other delicate features. These mostly exist in the deepest portions of the cave, where they survive visitors or the onslaught of spring runoff and sediment. Many of the solution caves were formed before the great ice age that descended upon Northeast Wisconsin over the past million years. The melting of the glaciers flushed uncountable tons of sediment into the caves, and has all but filled them up with mud, silt, sand and gravel.

Sea caves, a misnomer since they exist along the modern and ancient shorelines of Lake Michigan and Green Bay, are shallow caves formed by wave action that slowly dissolved the dolomite along open joints and fractures. These caves are common along the Niagara Escarpment and can be easily seen at Cave Point Park south of Jacksonport. These caves are distinctive in their lack of dripstone formations, short passage extent, and their occurrence on cliff faces. They were formed during the last glacial epoch between 10,000 and 100,000 years ago.

The third type of Door Peninsula cave was formed through fault activity. These caves are not common and the best example of one is the Dorchester Cave in Sturgeon Bay. The cave was likely formed during an earthquake that rattled the peninsula and caused one of the structural joints to shift and open to a width of three to five feet. This action created a linear cave that was discovered during the excavation of the basement for the Dorchester Retirement Home. Gary Soule, an experienced caver who has visited virtually every cave in the United States, recognized the importance of this discovery in 1973 and convinced the Dorchester owner, John Penny, to preserve the cave. Soule, with his own money, mapped the cave and worked with the project’s contractors to install two steel doors in the concrete foundation of the Dorchester. The first door accesses the northern extension of the cave, and the second allows entrance to the southern extension. The cave is mostly filled with glacial outwash sediment and rock debris but is an excellent example of the structural control of caves (Fig. 3). The flat joint surfaces of the cave’s walls have been subjected to slow dissolution following the earthquake, and this has revealed beautiful fossils in the dolomite (Fig. 4).

Door County’s caves are literally buried gems in the peninsula. Sculpted by groundwater and now mostly buried by glacial sediment, scientists are still learning a lot about the peninsula’s underground world. Some of the caves are accessible but none have yet been developed into commercial enterprises. This means the public can only visit them through special arrangements with property owners. But, the next time you notice a depression filled with rocks in a farm field, consider that it is a doorway to the caves beneath the Door Peninsula.