Visitors to Northern Door have come to expect all things Scandinavia: fish boils, Fyr Bal and goats on a grass roof; limpa, Swedish pancakes and lingonberry jam. But not all of the early settlers on the peninsula were Swedes. A few were hardy Germans, and for a taste of their presence, consider the Wednesday evening specials at Donny’s Glidden Lodge Restaurant.

The Glidden Lodge Beach Resort and the restaurant are now separate businesses in adjacent buildings, but originally they were one enterprise. Tradition has it that land developer Orrin Glidden hired Ewald Schmock to build what is now Glidden Drive, but because of financial difficulties, the speculator paid for the road construction in land rather than cash.

In 1937 Schmock built an inn on his new property, a restaurant on the first floor with seven rental rooms on the second. The native stone and rough-hewn cedar structure, had an Old World feeling that reflected the builder’s German heritage.

The property passed to Jim Talmadge in the 1980s, and then to Donny and Rita Zellner in 1998. For eighteen years the Zellners had operated a restaurant in Alaska, Wis., in Kewaunee County, celebrating chef Zellner’s ancestral roots by offering a Tuesday night German buffet that featured his original recipes. 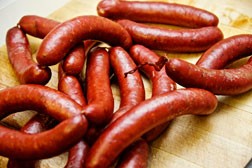 When the couple took over the Glidden Lodge Restaurant, they brought the popular German buffet with them, but scheduled it for Wednesday evenings. Now rather than on a buffet, the same menu items appear but on a sampler German platter as well as specials.

In 2005 the Zellners sold the business to their son Tim who now serves as general manager, and leases the building from his parents. Donny’s recipes continue to produce the German night offerings, and he still helps out in the kitchen, presiding over the making of the sauerkraut soup featured on the Wednesday soup/salad bar. Rita makes some of the homemade desserts. Tim’s sister Carrie serves on the wait staff.

While the restaurant offers midweek German specials, in every other aspect it is a traditional upscale-casual supper club, but because of the building and the lakeside location, for many diners it is a destination in itself.

“People come in the entrance,” Tim Zellner said, “and look at the stone and wood, the vaulted ceiling and fireplace, and see the view of the lake from the windows,” and they are delighted. The lobby features a bar and lounge; the dining area includes a room with French doors, an adjacent large central dining room, and beyond that a third dining room separated by a low wall. Windows line the exterior of all the rooms, offering lake views from every table in the restaurant. More than a dozen tables offer window-side seating. 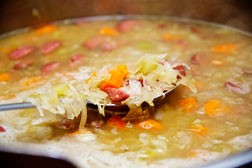 Just as the building with its heritage and sturdy construction inspires a feeling of permanence about it, so does the service. “People like seeing the same faces every year, the same wait staff,” Zellner said. “There is not much turnover with our staff, and people like that.”

The restaurant’s clientele consists of a good base of repeat customers, Zellner said, drawing not only from the peninsula, but Green Bay, Kewaunee, and other communities in northeast Wisconsin. And the restaurant is popular with seasonal residents, especially those who stay at the Glidden Lodge Beach Resort.

Donny’s offers a white linen tablecloth culinary experience, but diners are equally comfortable in sports coats or in golf shirts and walking shorts. The regular menu features nightly specials as well as a selection of steaks (Donny was trained as a butcher and cuts his own steaks), seafood, and other supper club fare. At meal’s end, the waitress will present a tray with a tempting array of desserts.

The German offerings vary and may include Bavarian pork chops, sausage, meatballs, beef rouladen, schnitzel, bread dumplings, red cabbage and sauerkraut. Sauerkraut soup is a constant, as is a selection of German beers – a taste of Germany without jetlag. 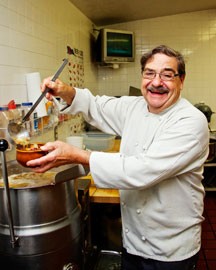 While the food certainly merits a visit, the quiet serenity of the dining experience is especially memorable, soft music in the background and a magnificent view of Lake Michigan just outside the windows, the horizon off in the distance. The pulse rates of diners slow as their waistbands expand.

Donny’s Glidden Lodge Restaurant, which is located on Glidden Drive just south of the village of Whitefish Bay, is open throughout the year, with an early bird special from 4 to 5:30 pm. Reservations are recommended during the busy season. Visit donnysgliddenlodge.com or call 920.746.9460.