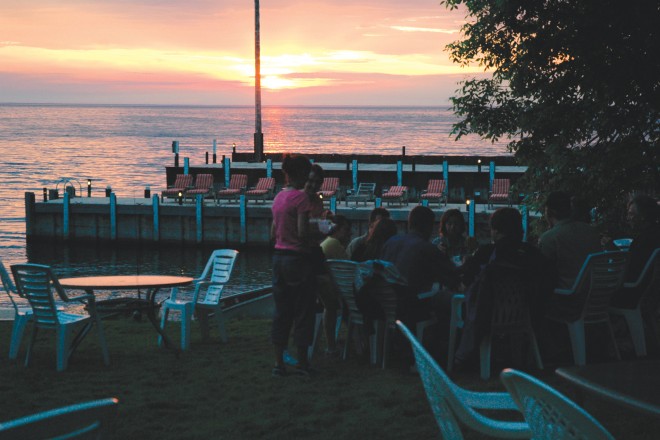 The delicious smells of an open grill wafting through the air, the sounds of waves washing upon the shore, sunshine on your face and an ice cold margarita sweating on the table in front of you – no, this is not some Caribbean island fantasy. You are sitting at one of the outdoor tables at Fred & Fuzzy’s Waterfront Bar & Grill.

Nestled on the western shore of beautiful Little Sister Bay, Fred & Fuzzy’s has quickly become a favorite dining spot in Door County providing a relaxed, casual atmosphere along with outstanding food, a full bar, and stunning scenery. Located less than a mile from busy Highway 42, but feeling more like a thousand, Fred & Fuzzy’s is the perfect escape from the bustle of summer in Door County. The large dock for boaters to tie up to, views of sparkling clear water, stunning sunsets or incoming storms, and children playing on the beach set a dramatic, yet comfortable background for the indoor and outdoor restaurant.

Though the bar and grill itself is relatively new, Fred Luber and Fuzzy Sunstrom have been active in Little Sister Bay for quite some time. Fred, Fuzzy and Susie Sunstrom have owned and operated the Little Sister Resort for over 30 years. The idea of adding an outdoor bar and grill slowly evolved over the years as trips to the Florida Keys in the winter months brought the inspiration. During these visits the various outdoor bar and eating establishments known as “tiki bars” emulated the feeling that Fred, Susie and Fuzzy wanted to have up north. All of this led to the thought of opening a similar eatery in Door County.

When the property next to the resort, known as Grandma’s House and Honeymoon Cottage, became available, Fred & Fuzzy’s became a reality. The bar and indoor seating area now occupy what was the cottage. Fred & Fuzzy’s first opened its doors in 2001 in the transformed cottage and patio, along with a few tables on the lawn. After a busy fall, it was clear that more space was needed and the awning over the patio was added, allowing for an indoor seating space.

With their fourth full summer underway the business continues to grow, especially as more boaters discover the ease of tying up to the dock for a bite to eat. All boats are welcome, but if you tie up in a spot marked reserved, expect to be asked to move. Boat trips to Fred & Fuzzy’s for a sunset cocktail or afternoon snack have become a weekly event for many.

Food and drink were not all for Fred & Fuzzy’s. Last summer saw the addition of a live music series on Sunday evenings. Kicking back and relaxing to various artists while enjoying a meal embodied the easy-going nature of Fred & Fuzzy’s. The response was very positive and this summer Tuesday evenings will be added.

As both the building and business have grown, the menu has expanded as well. The grill is still the main attraction with great burgers and flavorful whitefish sandwiches being popular choices. The tasty portabella mushroom sandwich and three-cheese deluxe sandwiches are notable vegetarian options. This summer brings the addition of panini sandwiches, grilled on ciabatta bread. Still, the most well-known item on the menu is the Little Sister Famous Smoked Fish Pate. Fuzzy’s secret recipe uses smoked whitefish, but beyond that ingredient, he won’t reveal any others!

Another growing tradition is Fred & Fuzzy’s Fish Fry. Occurring on Wednesdays and Fridays, fresh lake perch is featured. The bar is fully stocked and the margaritas and Bloody Marys are not to be missed. The relaxed atmosphere and appealing menu are enhanced by the friendly staff and their capable service.

The spectacular location of Fred & Fuzzy’s Waterfront Bar & Grill along with its unique style make it a wonderful place to wile away a sun-washed afternoon or enjoy the drama of an oncoming thunderstorm. Open for lunch and dinner, seven days a week, Fred & Fuzzy’s is a terrific gathering spot. Pull up to the dock or drive off the beaten path and lose yourself for a few hours with Fred, Fuzzy and the waters of Little Sister Bay.