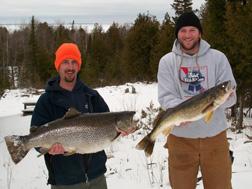 Used to be that humans would fish through a hole in the ice during the winter months out of necessity and survival, now – it’s mostly for fun.

On the weekend of March 3 – 6, Husby’s Food & Spirits of Sister Bay will celebrate the curious and popular sport of ice fishing with their second annual Ice Fishing Tournament on the waters of Door and Kewaunee Counties.

“Last year it was great,” says Husby’s Manager James Larsen. This year, he says there are “lots of sponsors and lots of people involved.”

Paul Delaney, captain of Late-Eyes Sports Fishing Guide Service, who is “very involved in this fishing community,” according to Larsen, is one such person, distributing flyers and bringing in donated equipment from tackle companies who sponsor him.

The donated equipment, along with other donated items, from a portable ice shack to fishing equipment, will be up for raffle. “Everyone gets a prize,” says Larsen. The cost for entry is $20 per person. Cash prizes will be awarded to participants who catch the top three fish in five fish categories: perch, brown trout, northern pike, whitefish, and walleye.

On Saturday, Husby’s will “capitalize on the Mardi Gras theme,” says Larsen. “Our goal is to have a tent on the ice all day Saturday. Festivities will begin about 11 am and everyone is welcome!” The day will feature a Live Crawfish Boil for $10 a bucket, beer and Bloody Marys, as well as go-kart races and ice golf.

“We’re hoping to have some great ice,” says Larsen. “It’s going to be a crazy fun day.”

Larsen also credits the help and support of the Sister Bay Advancement Association (SBAA) and Paige Funkhouser for making this event a reality.