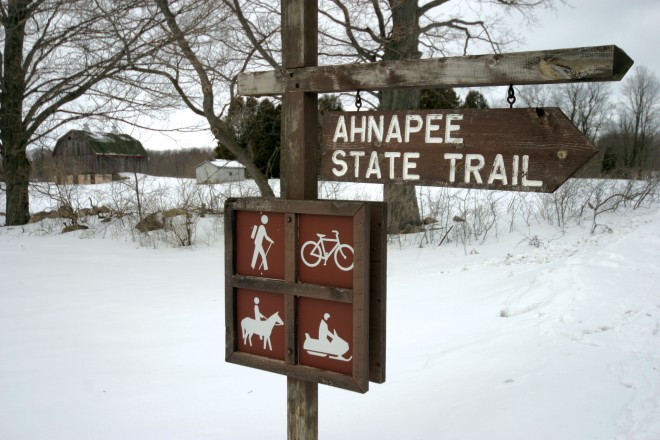 75 years, beginning in 1894, the sounds of train whistles and steam engines could be heard in Southern Door County, moving freight and commerce back and forth between Green Bay and the Door Peninsula. Since the mid-1970s, however, what was once a railway has been transformed into a year-round recreational pathway utilized by thousands of Door County residents and visitors annually.

The Ahnapee State Trail runs from Sturgeon Bay to Algoma, then west to Casco for a total distance of almost 30 miles. The trail is named for the Ahnapee River, which parallels the route for about five miles between Forestville and Algoma. According to the Wisconsin Historical Society, the name Ahnapee is a corruption of “anin-api,” or “when or at what time” in the Potawatomi language.

The Ahnapee State Trail originated with the Ahnapee & Western Railroad, which served as the primary industrial link for Door, Brown and Kewaunee Counties, hauling lumber, plywood, dairy products and other commodities and supplying the local shipbuilding-related industries. The railroad line extended across the Sturgeon Bay Ship Canal via a rotating train bridge, ending at Bay Shipbuilding Company.

Rising costs and alternative means for shipping, followed by the condemnation of the swing bridge across the canal, forced the railroad to abandon the line on August 9, 1968. The State Department of Natural Resources (DNR) began to acquire the former railroad rights of way. A “rails to trails” conversion removed the tracks and the DNR opened the cleared railway for the Ahnapee Recreation Trail. The remnants of the rotating swing bridge are now a public walkway behind Bridgeport Waterfront Resort.

When the DNR took over, the trail was not improved and had a very rough grade. The section of the trail between Wilson and Settlement Roads and County Highway S was very low and subject to frequent flooding. In partnership with the DNR and Kewaunee County, Door County took over ongoing responsibility for the trail in 1994, which began a state-funded rehabilitation of the entire trail in 1994 and 1995. Among other things, the rehab project raised the trail in many places and eliminated a deerfly population that rendered the trail at times practically impassable.

The eight to ten-foot wide Ahnapee State Trail now has a firmly packed gravel surface. During spring, summer and fall hikers, cyclists, horseback riders and horse-drawn carts and wagons share the trail. During the winter the trail is especially used by snowmobiles – though cross-country skiing is also permitted – and interconnects with 95 miles of snowmobile trails in Kewaunee County and 275 miles of trail in Door County.

The Door County section of the Ahnapee State Trail comprises 144 acres, from Sturgeon Bay to the southern county line, with access points that have restrooms and parking facilities at Forestville Dam County Park and South Neenah Avenue in Sturgeon Bay. The trail then extends 18 miles into Kewaunee County. There is also a City of Sturgeon Bay trail extension that connects the Neenah trailhead with Potawatomi State Park.

The Ahnapee State Trail provides a ground-level view of the wide variety of flora and fauna that populate Southern Door County. The topography changes from marshland to farmland, and passes directly through Maplewood and Forestville. The trail passes buildings that illustrate the former railroad history of the route. The trail itself, as a former railroad grade, is fairly flat and even, making it an easy and enjoyable trail for outdoor enthusiasts of all levels and abilities.

A portion of the trail near Forestville passes through an area burned by the Great Peshtigo Fire of 1871, the most devastating forest fire in American history, which destroyed more than one million acres and killed almost 1,200 people. The fire occurred at the same time as the Great Chicago Fire and was overshadowed by the events in the big city, even though the Peshtigo fire was much larger and far deadlier.

As a year-round recreational venue for Door County, the Ahnapee Trail is a wonderful location from which to view the seasonal changes on the peninsula, including the famous fall colors. The trail is particularly busy with traffic in the winter months, especially a snowy winter like the one just past. A counter placed by the County Parks Department near the Bayview Bridge received 6,700 hits during the recent snowmobile season.

According to Door County Parks Director George Pinney, the county currently budgets about $5,000 a year for maintenance of the trail; that money is matched by grant funds from other sources, including the State of Wisconsin. The continuing goal of the DNR and the Parks Department is to improve safety on the trail.

The long-term goal of the Parks Department is to officially extend the Ahnapee Trail all the way to the mainland end of Door County. There are continuing and ongoing negotiations with local land-owners to purchase land to extend the trail over the Bayview Bridge to Utah Street and to Michigan Street, then moving north from there.

Pinney has set a personal goal of extending the trail up to the intersection of State Highways 42 and 57, near The Mill Supper Club, before his projected retirement in about seven years. Once that’s done, the next goal would be to have the trail continue all the way up to the Northern Door Program Center of the YMCA in Fish Creek, and beyond. But that part of the project, Pinney jokes, will be left to his successor.

For now, the Ahnapee State Trail presents a wonderful opportunity for visitors and residents alike to explore the natural beauty of Door and Kewaunee Counties year round, through whatever means of transport that appeals to them.